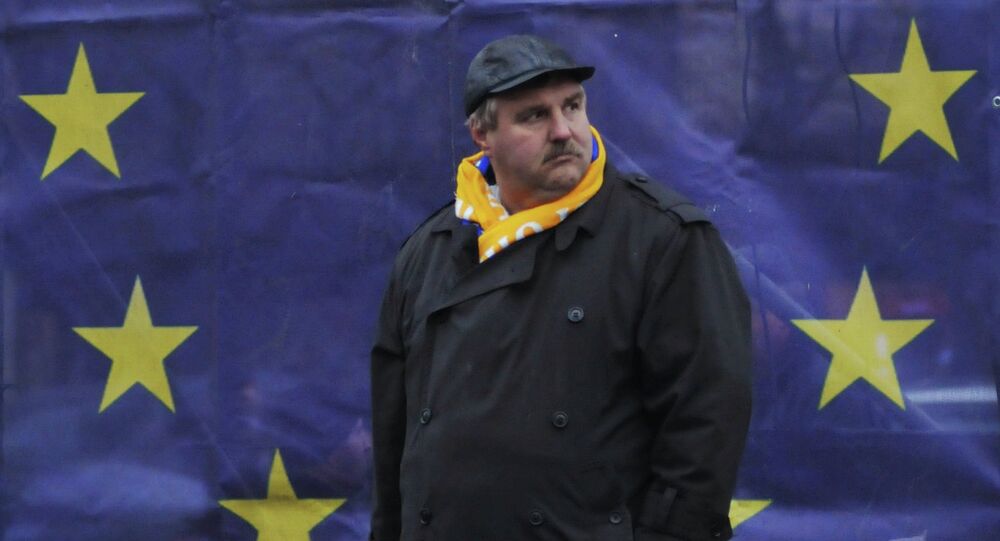 Angelo d’Orsi, a professor of history at the University of Turin, was interviewed by the Center for International Journalism and Research of the International Information Agency “Rossiya Segodnya.”

© Sputnik / Maksim Blinov
Peace Process in East Ukraine May Start December 9: Kiev
It’s been a year since the Maidan protests began, and ten years since the “orange revolution” of 2004. Kiev and Washington insist that all this time Ukraine was advancing towards freedom and democracy. Is it the case?

Angelo d’Orsi: Western media operate according to the guidelines defined by Washington and Brussels. Other sources, the so called “pro-Russian” ones, could be labeled as propaganda. It’s not an easy task to gain access to independent sources of information nowadays; it is difficult to find the “golden mean” amidst the stream of contradictory information. So where is the truth exactly? This is a task for a researcher, a historian.

According to the information I have access to, I sincerely believe that Ukraine did not become more free or democratic. The current developments point to the creation of a society where latent chauvinism is based on militant anti-communism; a society willing to add oppressive measures to its legislation. No, after Ukraine had “driven away the tyrant” – mostly thanks to foreign intervention – the country did not attain freedom. Which is, of course, quite a paradox, because the new masters of Kiev consider the West to be their economic partner and a political role model. Can Petro Poroshenko be perceived as a democrat if he was brought to power by the US and the EU?

Some say that the military conflict in Ukraine is a manifestation of an eternal confrontation between East and West. Do you agree with this statement?

Angelo d’Orsi: The main cause of this conflict is the West’s adherence to a policy of expansionism, under the often not-so-wise leadership of the United States. This policy was quite typical for the last 25 years, although it began much earlier, by embodying its own ideological paradigms along with the economic model.

© Sputnik / Evgeny Kotenko
Preparation for Ukraine Reconciliation Talks Underway, Date Unknown: Kiev
The continuous laws of capitalism – to produce and to reproduce – aggravate at the onset of an economic crisis, and seizing and controlling the colonial and semi-colonial markets becomes a priority. And it is always easy to find a rationale – there is always some “tyrant” out there, just like the one they “found” in Ukraine. One of the chief reasons was corruption among the political elites, but spontaneous rallies were affected both by foreign factors – representatives of various Western countries – and by domestic ones – the neo-Nazi elements.

The anti-Russian sentiment cultivated by Western propaganda among a part of Ukraine’s population should also be taken into account. Especially considering that, in a sense, Ukraine is the heart of Russia, just like Kosovo is the heart of Serbia.

Thirteen members of the Ukrainian parliament are also members of neo-Nazi groups. What kind of a neighbor may Europe actually get?

Angelo d’Orsi: There is a significant risk. It became especially apparent after a UN vote on a resolution against the glorification of Nazism: other that the US and Canada, only Ukraine voted “No”, while the EU shyly abstained. From France to Hungary and Italy, the far-right movements and parties resurge and take over new political space. They already became recognized participants of a dialogue with other political forces. The lessons of history are forgotten and dark times are coming, I’m afraid.

Winter began, and Ukraine is on the verge of a humanitarian disaster. What should be done to ensure peace in the country?

Angelo d’Orsi: The West loudly protested the “annexation of Crimea” – the region that historically, linguistically and culturally is a part of Russia. Crimea rejoined Russia following a legal and legitimate referendum, and similar votes were held in Ukraine’s southeast.

But people forget that everything started with a provocative NATO expansion, after the alliance’s troops were deployed along the borders of the former Soviet Union. Not only did it contradict the agreements made in the 1990’s, but it also initiated a dangerous process of exerting a military and political pressure, the effects of which we can see today. The West is also responsible for providing immediate support to the anti-government revolt, as well as for funding and equipping far-right terrorist groups.

We should also consider the long-term consequences of the current events. The international community should’ve supported the actions of Russia as a great power. It is exactly the absence of balance, created by the fall of the USSR, which made the current conflict possible. The concept world order promoted by the US is based on its hegemony, with the UN being assigned a phantom role. Until other countries can compete with the US power, Ukraine will remain in the epicenter of the new Cold War, the war of sanctions.

You cannot capture a Cold War on film or shoot a TV report about it. We are merely being forced to choose one side or the other: US marines or jihadists, Russians or Americans, Nazis or Communists, Poroshenko or Yanukovich. We’ve lost the capacity for critical thinking, and we have no answers. The peace is far away because no one wants to tell the truth, to know the truth and to relay it to others.