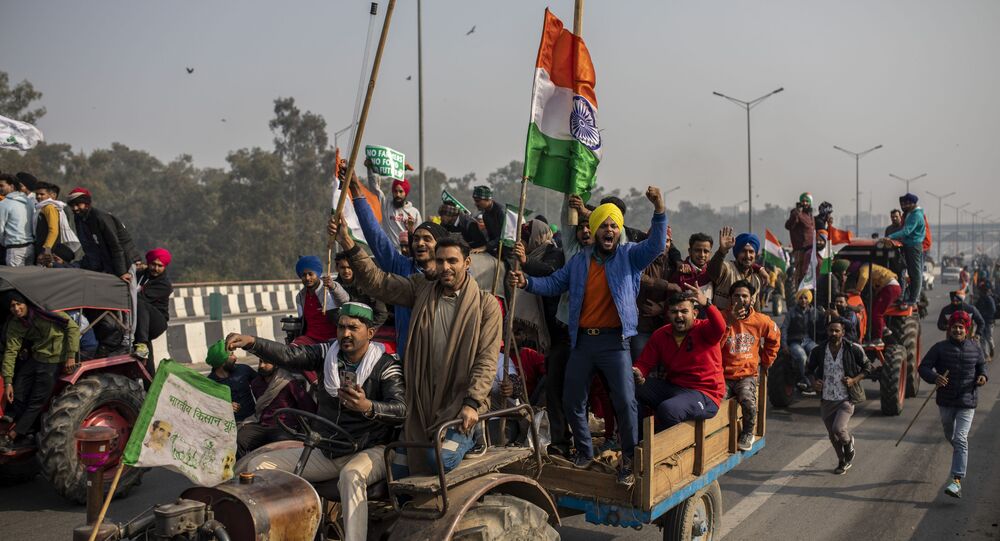 Since November 2020, thousands of farmers have been protesting on the roads leading to Delhi in the states of Haryana and Uttar Pradesh. The agitated farmers are demanding a complete rollback of three agricultural laws passed by the Prime Minister Narendra Modi-led government in September 2020.

The Delhi Police have set up anti-riot squads and called in paramilitary forces in view of a protest by farmers against three agriculture laws during the ongoing monsoon session of the Indian Parliament, officials said on Thursday.

"Heavy barricading has been done at the borders and all routes leading to Delhi are under surveillance and being monitored round the clock. We are also using drones to keep watch from the aerial view", the officer said.

All arrangements have been made to ensure that the Republic Day-style ruckus when a tractor march turned violent, after protesters broke through barriers and clashed with security forces, is not repeated, the police said.

Anti-riot squads and water cannons have been put in place at different sites across the city, especially near parliament.

"The leaves of all Delhi police personnel have been cancelled and they have been deployed on duty", a senior police official aware of the arrangements told Sputnik.

​On Wednesday, police allowed farmers to demonstrate at Jantar Mantar, a popular place in the heart of Delhi and located barely 2 km from the Indian Parliament, where the monsoon session is underway.

"A group of 200 farmers will hold a protest at Jantar Mantar. They will travel in buses from the Singhu border (of Delhi) and our teams will escort them. They will be holding the protest there from 11 a.m. to 5 p.m. (Indian time)", the officer said.

Farmer unions have been asked to promise that all COVID-19 norms be followed and the meeting be peaceful, law enforcement stated.

This is the first time since the unrest in the national capital during a "tractor rally" on Republic Day, marked on 26 January, that the authorities have granted permission to farmers to demonstrate in Delhi.

Thousands of farmers, mostly from the states of Punjab and Haryana, have been agitating at three Delhi border points - Singhu, Tikri, and Ghazipur - against three farm laws that they claim will do away with the minimum support price system, leaving them at the mercy of big corporations.

The farmer unions' representatives and Prime Minister Narendra Modi's government have held several rounds of talks to resolve the issues. But they have failed to break the deadlock so far.