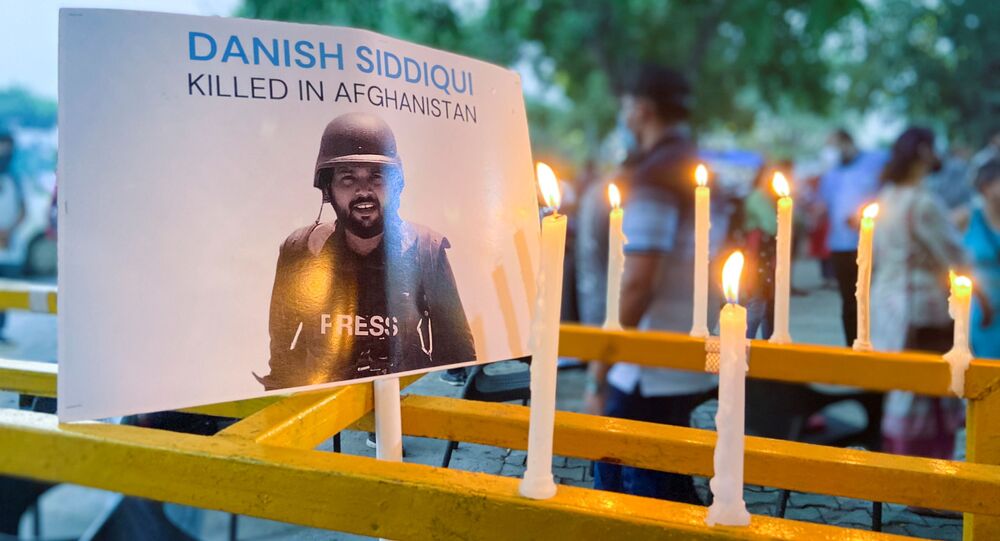 Taliban Killed Indian Photojournalist, 'Mutilated' His Body Before Handing it Over, Claims Report

The award-winning photojournalist was embedded with Afghan forces in the Spin Boldak district along the Afghanistan-Pakistan border, when he was killed during combat. The district in Kandahar Province was taken over by the Taliban* last week, before Afghan forces launched an offensive to reclaim control of the town.

Danish Siddiqui, the Pulitzer Prize-winning Indian photojournalist for Reuters, was killed by the Taliban in an ambush in the Spin Boldak district last week.

Ahmad Lodin, an Afghan journalist and head of Afghan Orband Weekly, has told the Indian publication News Laundry that Siddiqui's corpse was "disrespected" and "mutilated" when it was brought to Mirwais Hospital in Kandahar at 8:15 p.m. on 16 July.

© REUTERS / ANUSHREE FADNAVIS
A man sits next to a memorial for Reuters journalist Danish Siddiqui, after he was killed while covering a clash between Afghan security forces and Taliban fighters near a border crossing with Pakistan, outside the Press Club in New Delhi, India, July 17, 2021.

Indian government sources confirmed on the same day that Siddiqui's corpse had been "handed over by the Taliban to the ICRC (International Committee of the Red Cross)".

Lodin revealed that Siddiqui had been in Afghanistan for nearly a month and had arrived in Kandahar a week before his death.

The Humvee in which I was travelling with other special forces was also targeted by at least 3 RPG rounds and other weapons. I was lucky to be safe and capture the visual of one of the rockets hitting the armour plate overhead. pic.twitter.com/wipJmmtupp

​The Indian national was embedded with Sediq Karzai, an Afghan Special Forces commando, on 16 July, as the Afghan National Security Forces (ANSF) were involved in efforts to retake the Spin Boldak district from the Taliban.

According to Lodin, both Siddiqui and Karzai were in a car when they stopped near a hilly area. That is when they were ambushed by the Taliban. Both were killed in the Taliban attack.

Siddiqui had informed his employer Reuters earlier in the day that he was injured in the arm by shrapnel while reporting on the hostilities between the Taliban and the Afghan forces.

Reuters said that his death was caused by a Taliban attack while he was talking to some local shopkeepers.

The Taliban has denied the claims that they were responsible for Siddiqui's death.

"Our fighters never mutilate dead bodies. It is against the rules of Islam. He had embedded himself with security forces of the Kabul Administration and had come to the fighting site without coordinating with us. No one knew who he was", the Taliban's official spokesperson Suhail Shaheen told Sputnik on Wednesday.

The award-winning photographer's body was brought back to India on 18 July and buried at his alma mater, New Delhi-based Jamia Milia Islamia University, later in the evening, as per a university statement.