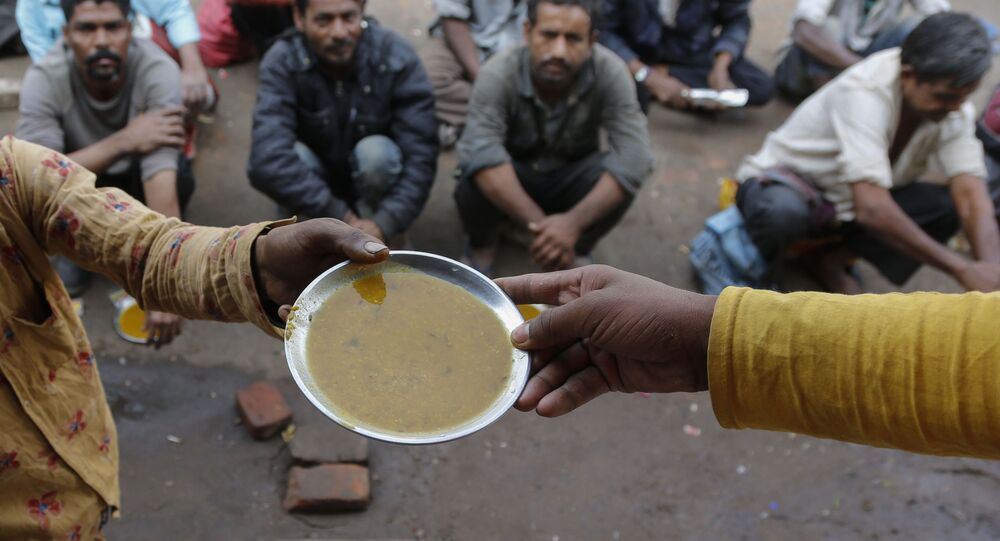 As the pandemic and lockdown wreaked havoc on the people's livelihood, around 230 million Indians were thrust into poverty in 2020. Almost 150 million lost their job, says a study by Azim Premji University.

Many Indian families continue to face hardship - whether because the main bread-winner has died from COVID-19 or has lost his job during lockdown - and are struggling to take care of their family as they did in pre-COVID times.

In April, 42-year-old Hiralal of Delhi lost his younger brother to coronavirus. Hiralal became the only earner in his 12-member family which includes his wife, parents, his deceased brother's wife, and seven children — four of his own and three from his younger brother.

But he soon lost his job in lockdown during the second wave of COVID-19.

Today, his family is one of those facing financial distress. The last few months have affected them drastically, especially the ones belonging to vulnerable and economically weaker sections of society.

Struggle to Get the Free ‘Ration Token’

On 6 July, Sputnik met Hiralal at a ration shop in East Delhi's Laxmi Nagar area, after he came to check for his “ration token”.

The Delhi government is distributing coupons to the poor and migrants living in the city who don't have government-issued “ration cards”.

"I've been coming here since the beginning of June. If not me, then someone else from my Basti (slum area) comes to inquire about the coupons. Everyone says that the State government will give us free rations. But so far nothing has happened,” he said.

An extended lockdown to beat the second surge in COVID-19 in Delhi has left the dispossessed and daily wage earners in the city struggling to obtain food.

Delhi State Chief Arvind Kejriwal on 4 May promised free rations for all ration cardholders. The city government later extended the benefit to those, like Hiralal, who may not have ration cards. But the scheme has yet to be implemented on the ground.

Those who do not have ration cards must collect “coupons” from the city lawmakers' offices, government ration shops, and Delhi government schools. According to the government, “coupons” are also available online.

But Hiralal and thousands like him in Delhi are still struggling to get even one such coupon.

"Hundreds in my Basti are dependent and relying on private charities and neighbourhoods for food," stressed Hiralal.

On 8 July, Sputnik visited his village, Munchun Basti, on the floodplain of the river Yamuna. Almost every house in this village is made with sticks and blue tarpaulin sheets.

50-year-old Shabana is a widow. She lives with her four children at Munchun Basti and works as a domestic helper in flats near Delhi’s ITO area.

"Before April, I used to earn around INR 9,500 ($125) every month by working at nine flats every day," Shabana said, adding: "In most of these houses I used to wash utensils and clean the house."

But she lost three of her clients after they too lost their job in the pandemic. The other six clients reduced her wages by half citing lockdown challenges.

Today, she feels: "Hunger and lockdown will kill us before COVID."

"We all have identity cards — Election Identity Card, bank account, Aadhaar Card (identification card), and we applied for the ration card almost four years ago. But so far, no luck," Shabana said.

Hundreds of others like Shabana and Hiralal said that they applied for ration cards five or six years ago. But authorities have not yet issued them. In May, during the peak of the second wave, an estimated 15 million Indians lost their job, according to the Centre for Monitoring the Indian Economy.

According to the Delhi government, it has been estimated that about two million people don’t have ration cards in the city. Although it claims that it had tried to reach out to a maximum number of poor people, but activists insist at least 200,000 have not received the rations.

Kamlesh Kumar Mishra, an advocate who has also filed a petition in the Delhi High Court regarding the matter, said the court understands that many migrant workers do not possess identity proof, and had directed that ration be given based on self-certification to those without documents.

“However, to our knowledge,  till date, the Delhi Government has not implemented the directions."

Mishra said he and his group had detailed at least 40,000 families, mostly of east, South and northeast Delhi, who have not received the rations.

The Indian Labour Ministry has found that more than half a million migrant workers and their families left Delhi for their hometown during the second wave this year. According to the ministry, more than 1.3 million migrants are living in Delhi at present.

The Centre for Monitoring Indian Economy (CMIE) has issued a report saying that 218 million people, who had been considered middle-class before Covid-19 srruck, were pushed into poverty as their their monthly per capita consumption has shrunk 12 percent in the year 2020-21.