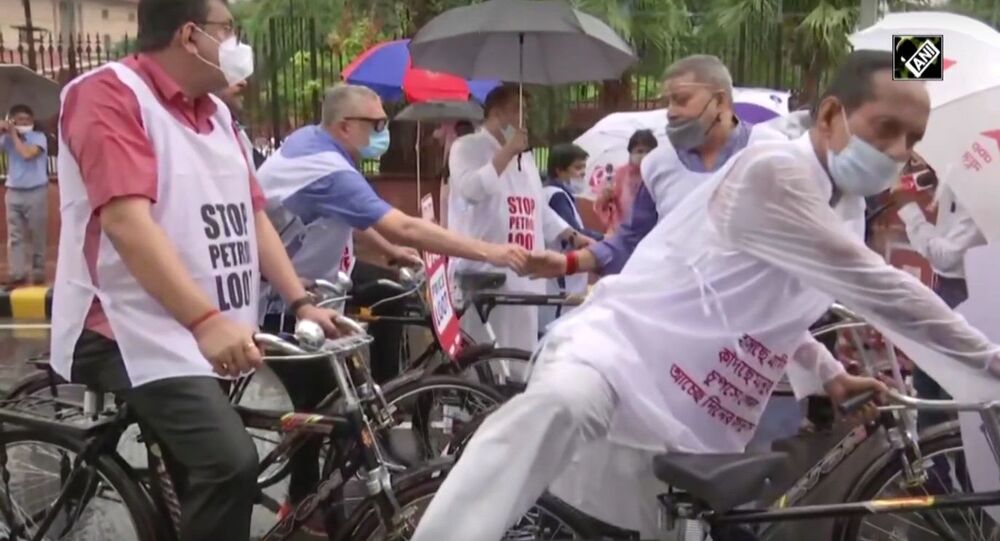 India has witnessed an unprecedented spike in the price of fuel under the Narendra Modi government, which has been raised 40 times in 2021 alone. Despite the opposition parties taking to the streets in protest, the federal government's fuel policy remains unchanged.

In a symbolic protest against skyrocketing fuel prices in India, lawmakers from the opposition party Trinamool Congress (TMC) reached the Parliament on bicycles.

Despite the rain in Delhi, TMC lawmakers reached the Parliament on the first day of the monsoon session, carrying signs reading "STOP PETROL LOOT" and other slogans. The opposition parties have submitted adjournment notices to the Speaker of the Parliament to discuss the fuel price hike.

Another slogan they used was: “Narendra Modi give us answers. You have to give answers”.

The opposition lawmakers also introduced the issue on the floor of the Lower House of the Parliament and created a ruckus while Modi was introducing his new newly-inducted cabinet ministers.

​Petrol and diesel prices are now above INR 110 (approx. $1.40) in major cities of India due to a constant stream of price hikes this year. Cooking gas or liquefied petroleum gas (LPG) has also seen an estimated 40 percent price spike compared to last year.

The rise in fuel prices has been burning a hole in people's pockets, especially the middle-class population who are struggling to make ends meet amid the COVID-19 pandemic.

Union Govt provides details of number of times the petrol/diesel prices have been changed in the last three years.
Price of Petrol increased 39 times and decreased once this year. pic.twitter.com/omnhjLpAWx

​Earlier this month, West Bengal state chief Mamata Banerjee had written to PM Modi seeking a reduction in fuel prices. “It is my earnest request that the taxes charged by the Centre on petrol and diesel are substantially reduced to give much-needed relief to people and check the overall inflation trend in the country,” the letter stated.

Earlier, leaders of the Congress party were seen riding bullock carts in protest against the federal government. Last month a mock funeral of a motorbike was also arranged in West Bengal state.