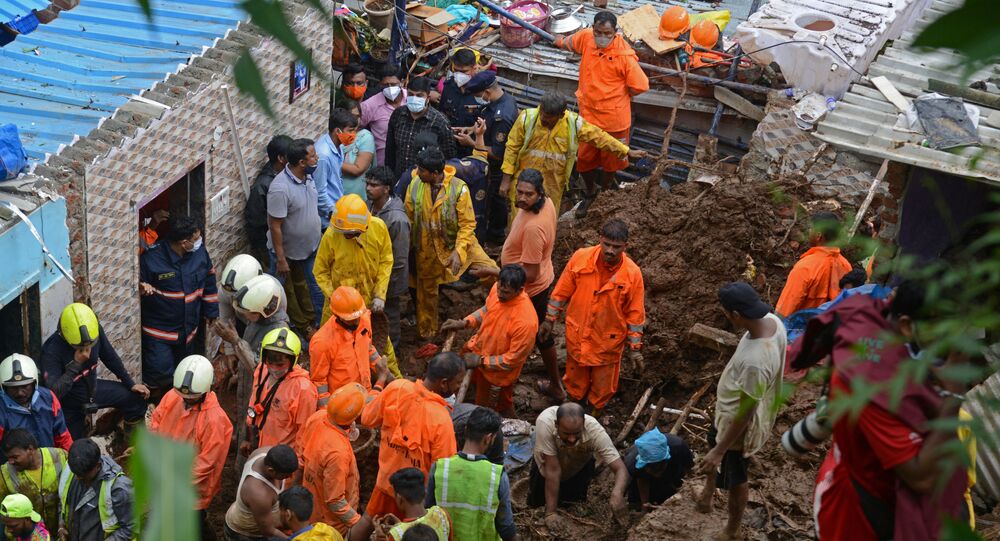 Delhi and the surrounding area has witnessed a continuous downpour over the past 24 hours. While the monsoons have arrived later than expected in the national capital region (NCR), heavy rains are inconveniencing residents and resulting in property damage.

Two people have died and three others are feared to be trapped under the debris of a building that collapsed late Sunday night following incessant rains in Gurguram, a city near India's capital, Delhi.

Speaking to Sputnik, a police official from the Farukhnagar police station in Gurugram, Haryana state, said that about three people could still be trapped under the bricks, as the exact number is yet to be determined.

"Two people have died. The National Disaster Response Force (NDRF) officials are present at the site, along with police personnel, to carry out rescue missions. The reason why the building collapsed remains unclear as of now. Our priority is to help anybody who could be trapped under the debris for now," the official said.

Videos from the site have emerged on social media showing cranes being used to move the rubble away.

​​​Deputy Commissioner (DC) Yash Garg revealed to the media that the rescue operation is likely to continue throughout the day because of fluctuating electricity due to the rainfall slowing down the search process at night.

According to preliminary reports, the building was a lodging facility for labourers working at a warehouse company, the details of which remain undisclosed as of now.

Meanwhile, the rain showers are blocking roads and underpasses in different parts of Gurugram city. People have shared visuals of water entering into their houses exposing residents to the risks of unfortunate accidents.

#gurgaonrains when rain comes in gurgaon we have lots of water on roads and no electricity #gurgaon pic.twitter.com/vsFywrgM8k