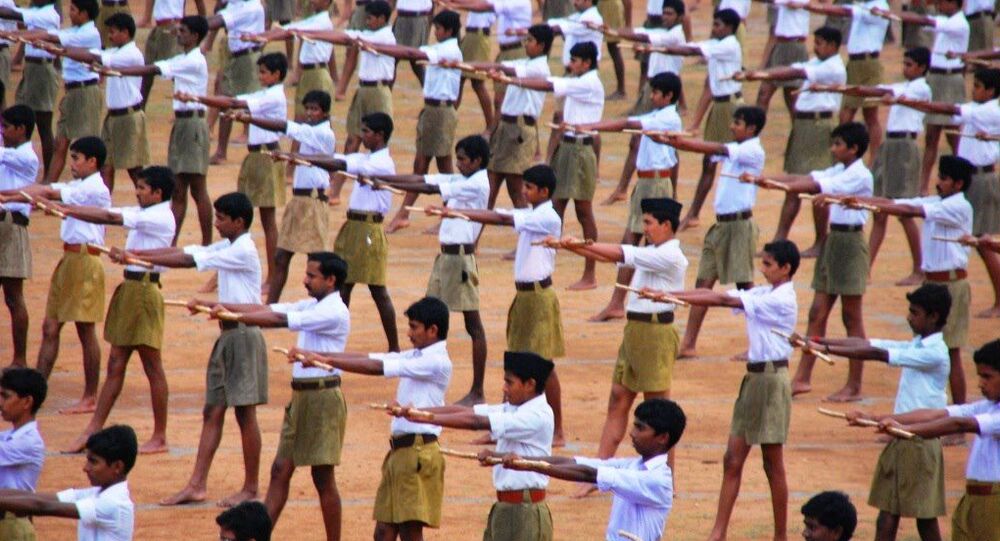 The concept of Hindutva or, the Hindu ideology, is the predominant form of Hindu nationalism in India. It is championed by the ideological mentor of the country's ruling party Bharatiya Janata Party (BJP), the Rashtriya Swayamsevak Sangh (RSS) and its allied organisations like the Vishva Hindu Parishad and the Bajrang Dal.

Shiv Sena leader and Rajya Sabha MP Raut was particularly scathing in his attack on Khan, as he accused Pakistan of fomenting trouble in neighbouring Afghanistan.

"Who are the creators of Taliban? It is Pakistan. The whole world has to bear the brunt of the terrorism that Pakistan has spread with the help of the Taliban, so don't trust Imran Khan," Raut told Indian media on Saturday.

"What is the ideology of RSS? That Jammu and Kashmir is a part of India, it is true. This is the sentiment of the people of the whole country as well" he added.

As American and NATO forces pull out, the violence has escalated in Afghanistan recently, since Taliban fighters mounted a series of attacks in the country, resulting in Afghan security forces ceding large swathes of territory, including the areas in and around Kandahar.

According to US President Joe Biden, the American and allied forces are set to completely withdraw from the war-ravaged country on 31 August.

Speaking during a Central-South Asian conference in Tashkent on Friday, Imran Khan was asked about the resumption of dialogue between India and Pakistan, to which he replied: "I want to tell India that we are waiting for a long time to live in a civilised manner. But what will we do as the ideology of RSS has created an obstruction."

This is not the first occasion when the Pakistan PM has criticised the RSS ideology.

"Today in India we are seeing the Nazi-inspired RSS ideology take over a nuclear-armed state of over a billion people. Whenever a racist ideology based on hatred takes over, it leads to bloodshed," he said in a tweet in February 2020, when riots between Hindus and Muslims had engulfed India's capital Delhi.

Congress leader and former State Chief of Madhya Pradesh Digvijaya Singh also lashed out at Khan and accused him of shielding terrorists in his nation.

"As long as Pakistan government led by Imran Khan continues to give protection to those who sent terrorists to Mumbai, talks will continue to be stalled and there will be distrust between the countries," Singh said.

Talks between India and Pakistan have been stalled after India accused Pakistan for carrying out a terror attack on the Pathankot Air Force base in 2016.

The Air Force base is considered to be vital for India's security apparatus, as it is situated in Pathankot town in the northern state of Punjab, sharing its border with Pakistan.