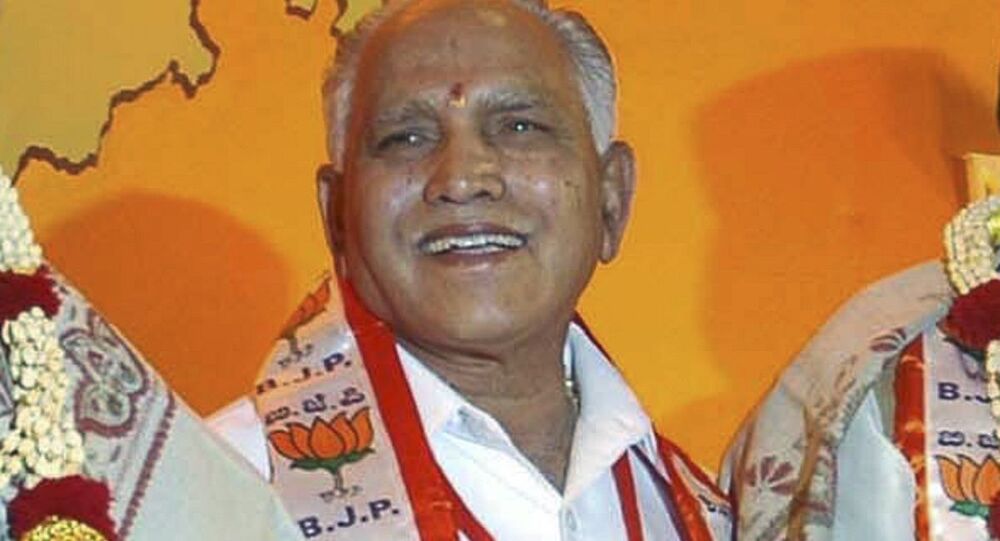 'Not At All': Karnataka State Chief B. S. Yediyurappa Reacts to News of His Resignation

Karnataka is the only southern state ruled by the Bharatiya Janata Party (BJP). The party has 120 members in the 224-member state legislature, and Congress - the main opposition party - has 68 legislators.

Bookanakere Siddalingappa Yediyurappa, popularly known by his initials BSY, has dismissed rumours that he has quit as Karnataka State Chief. On Saturday, Yediyurappa, who is possibly BJP's most successful leader in South India, asserted that there was no changing of the guard in his state.

"There is no change of guard in the state… We discussed details yesterday with the Prime Minister…..I have not resigned, not at all", Yediyurappa told Indian media on Saturday.

Following Yediyurappa's meeting with PM Modi, an official statement from his office said, "During the meeting, Yediyurappa requested that the Upper Bhadra Project be declared a national project and also sought financial assistance of Rs 6,000 crore for the Bengaluru Peripheral Ring Road project. The Mekedatu Dam project and establishing a US Consulate were also discussed."

The meetings come at a time when speculations are rife that the central leadership of the BJP may ask Yediyurappa to make way for a new face in Karnataka.

Several media reports have said that Yediyurappa is facing a revolt in his party because a group of BJP lawmakers is seeking his removal from the state's top post because they are unhappy with his style of governing.

A few leaders of the party also want him to be replaced due to his age. Yediyurappa (79) has already broken BJP's unwritten rule of retiring its leaders from active politics at the age of 75.

Several disgruntled leaders from the state have also blamed Yediyurappa's son B. Y. Vijayendra for interfering with the functioning of the state government.

There have been at least seven unsuccessful attempts to replace him as state chief in the past.

Despite the rumblings in the state unit of the party, former Karnataka BJP spokesman and MLC Go Madhusudan denied that Yediyurappa was resigning from his post.

"The central leadership of BJP, including the Prime Minister and the Home Minister has full faith in the leadership of Yediyurappa, so there's no question of his resignation", Madhusudan told Sputnik on Saturday.

"I don't feel the PM and the party's central leaders will take a decision based on the inputs of only three leaders, especially when more than 110 party MLAs are with BSY. Also, with their continuous tirade against BSY, Vishwanath, Arvind and Basanagouda have exposed themselves and they are no longer respected by the state BJP workers," he added.