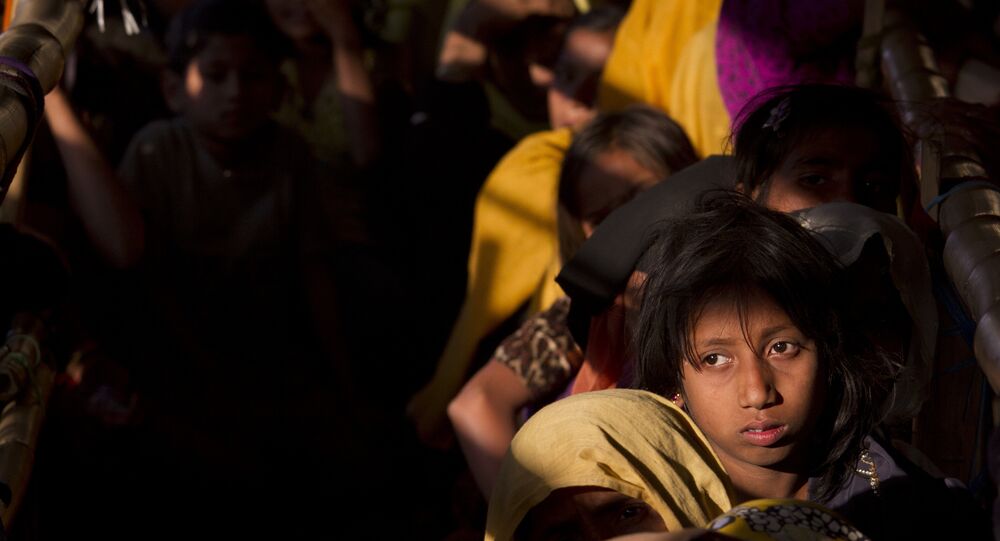 For centuries, India has taken in refugees from across the world. The country has provided asylum to Jews, to thousands of Sri Lankan-Tamils and has also taken in Tibetans, Afghans, and migrants from various other nations. However, in the case of the Rohingya Muslims, the government is taking a different stand.

With the constant fear of repatriation to their homeland, the Rohingya refugees in the national capital are making every effort to marry off their young girls to Indian men.

Speaking to Sputnik, a Rohingya woman in her late forties living at a refugee settlement in the Kalindi Kunj area of Delhi, said that several families in the camp are trying their best to find suitable matches for their daughters.

"We are continuously looking for Indian Muslim men to get our daughters married, which at least would make them citizens of India. It is not easy, as even the poor among the Indian Muslims look down on refugees and don’t want to get married to them," the woman, who didn't wish to be identified, said.

Another woman, Zohra, noted that most of the refugee families were fine even if their daughters got married to someone already married.

“What we have observed over the years is that Indian Muslims usually avoid getting married to Rohingya girls, fearing ‘victimisation’ by the community and even authorities,” she added.

According to the officials, there are three makeshift camps in Delhi where around 1,100 Rohingyas live.

WHO ARE ROHINGYA MUSLIMS

The Rohingyas belong to a community of Muslims generally located in Rakhine (Arakan) State in Myanmar.

After Myanmar's independence, the Union Citizenship Act was passed, which defined ethnic groups that can claim the citizenship rights.

After the military coup in Myanmar (1962), all citizens were required to obtain National Registration cards but Rohingyas were only given foreign identity cards (known as white cards) due to which they couldn't pursue educational and employment opportunities.

Later, in 1982, a new Citizenship Law was passed in Myanmar, according to which Rohingyas were declared 'Stateless'.They were not among the 135 officially-recognised national ethnic groups. Therefore, their rights to study, work, marriage and health services were restricted.

They were brutally persecuted during 1970's by the Myanmar military forces; incidents involved rape, torture and murder. Rohingyas have been forced to leave their state and country due to a violent conflict with the Buddhist community in Rakhine State, along with the Myanmar military campaigns against them.

In 2014, the Myanmar government came up with a plan for accommodating Rohingya Muslims as their citizens but the community was asked to change their ethnicity in the census form from Rohingya to Bengali.

ROHINGYAS START TO FLEE MYANMAR in 2012

Scores of Rohingya Muslims started leaving the country only in 2012 as they faced evictions, land confiscation, and attacks on their villages and homes, which were launched by Myanmar's military.

It all started with a case of gang rape in Myanmar. Some Rohingya Muslims were accused of the gang rape and murder of a Buddhist woman in Rakhine. The incident led to massive clashes between Rohingya Muslims and local Buddhists as well as protests.

Following the incident, the Myanmar government responded by herding thousands of Rohingya Muslims into a camp surrounded by barbed wire.

People living in the camps faced issues like starvation, ill-treatment , health issues which caused the spread of disease and even death. Rohingyas started to escape the camps and flee the country.

Within days, thousands of Rohingya Muslims boarded boats and fled the country's shores with no destination; the international press called them 'boat people'.

THOUSANDS OF ROHINGYAS CAME TO INDIA ILLEGALLY THROUGH DIFFERENT ROUTES

As Rohingyas speak Bengali, most of them headed towards Bangladesh in large numbers. Initially, Bangladesh authorities were lenient but with the rising influx of people from Myanmar, the authorities in 2013 chose to stop all humanitarian assistance.

Speaking to Sputnik, Shofi Alam, a Rohingya Muslim, stated that some decided to sail towards Thailand, but that the country had kept an eye on the developments in Myanmar and deployed its navy.

"Thailand's navy did not allow us to settle on their territories following which we thought to move to Malaysia, thinking that a Muslim majority country would give us shelter. But Malaysia adopted the same policy as Thailand," Alam said.

He further mentioned that for a few weeks, most of the Rohingyas managed to enter Indonesia, until their government declared that they were no longer welcome in the country.

"When almost all the doors were closed for us, people started moving towards India. By 2013, Bangladesh had also closed all the entry points for us so we started looking for entry points along the India-Myanmar border and India-Myanmar-Bangladesh tri-junction," he revealed.

Rohingyas entered India from the northeast through various routes and started spreading over a large area across various states.

Sputnik spoke to several Rohingyas who revealed that most of them had paid a good amount to enter India.

"Most of us somehow collected all the money we had and paid to the middleman who promised to bring us to a safer place. Despite several hardships, we feel really happy and safe in India. The country is like our home now. We do not want to go back to Myanmar. It would be great if Indian government accepts us and provides us citizenship," Shafiq Alam said.

He further stated that "if we get citizenship, we'll not have to suffer anymore. We will be able to apply for better jobs while our children will have a better future."

Currently, most of the Rohingya Muslims living in India are registered with the United Nations. They survive by doing odd jobs as they do not possess proper documents.

Several international organisations have appealed to India not to deport the Rohingyas. However, the Indian Ministry of Home Affairs claims that the Rohingyas are illegal immigrants, and thereby pose a threat to national security.

India's Modi-led government, through the Citizenship Bill, has extended the policy of availing Indian Citizenship to persecuted religious minorities from Afghanistan, Pakistan and Bangladesh to but is silent on providing the same to Rohingyas.

Cabinet ministers have disclosed that several thousand Rohingya Muslims are living illegally in the country. According to the centre's estimates, the Rohingya population has increased four times in India over the last five years.

The maximum concentration of Rohingya Muslims is said to be in Jammu and Kashmir. According to the Indian government, Rohingya are currently present in 12 Indian states.