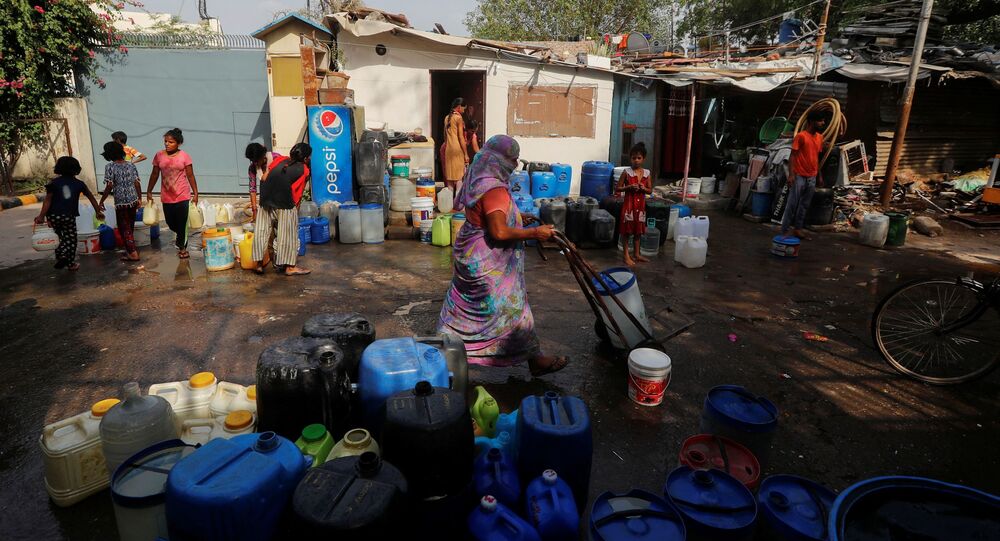 The water supply has been hit in Central Delhi, South Delhi, West Delhi and the New Delhi Municipal Corporation areas where India's important institutions - including the president and prime minister's official residences and the Supreme Court - are located.

As India's capital city faces an acute water shortage, the Bharatiya Janata Party (BJP) and Congress raised the issue outside the residence of Delhi State Chief Arvind Kejriwal in a protest on Friday.

Scores of leaders and workers from both the opposition parties chanted slogans against Delhi Chief and Aam Aadmi Party (AAP) leader Kejriwal, demanding adequate and clean water for all the city's residents.

#JustIn: @INCDelhi protesting against Delhi CM Arvind Kejriwal outside his residence over the acute shortage of water in the National Captial. For @SputnikInt pic.twitter.com/EFE3nxSG4c

"Arvind Kejriwal is misleading the people of Delhi. He is going to other states and misrepresenting the facts of Delhi. He is focusing on his 'freebie model' and he is not talking about providing better facilities in Delhi," Abhishek Dutt, the vice-president of Congress in Delhi, told Sputnik.

Dutt added: "Kejriwal has managed to increase the amount of water Delhi get by a mere 5 million gallons a day in seven years. He is cheating the people of Delhi. Blaming others will not work. We will continue our protests."

Meanwhile, the BJP president in Delhi, Adesh Kumar Gupta, held Kejriwal directly responsible for the water crisis on Friday, and warned that the water supply to the AAP leader's residence could be disconnected.

​​On Monday, BJP leaders and workers protested against the water crisis outside the residence of AAP politician, Satyendra Kumar Jain, who is also chairman of the Delhi Jal Board - the government body responsible for the provision of drinking water.

© Sputnik / Sandeep Datta
Delhi Residents Face Water Crisis as Spike in Ammonia Level Rises Seven-Fold
Delhi Police had to use water cannon to disperse the protesters who tried to disconnect the water supply to the minister’s residence.

Last Sunday, the Delhi Jal Board approached India's Supreme Court as it sought directions to the Haryana government to release Delhi's share of water.

Meanwhile, Raghav Chadha, the vice-chairman of the Delhi Jal Board has assured everyone that the water supply in Delhi will improve soon as the level at the barrage in the Wazirabad water treatment plant has been increased.

Chadha, who is another AAP politician, visited the barrage on Friday to inspect the water level.

@INCDelhi led by President @Ch_AnilKumarINC protesting over the water crisis in the National Capital. pic.twitter.com/xM3t8C6QrJ

"Haryana released 16,000 cubic feet [approximately 100,000 gallons] of water in the Yamuna at its Hathnikund barrage on Tuesday and it is likely to reach Delhi on Friday morning. From then on, the water crisis in the city will be resolved," Chadha said on Thursday.

According to the water authorities, once Delhi's neighbouring Haryana state released water the situation improved. The river's water level has risen.

"With the fresh discharge of raw water, the river is now back to earlier levels, and an increase in water levels is visible," a senior official of the Delhi Jal Board told Sputnik.