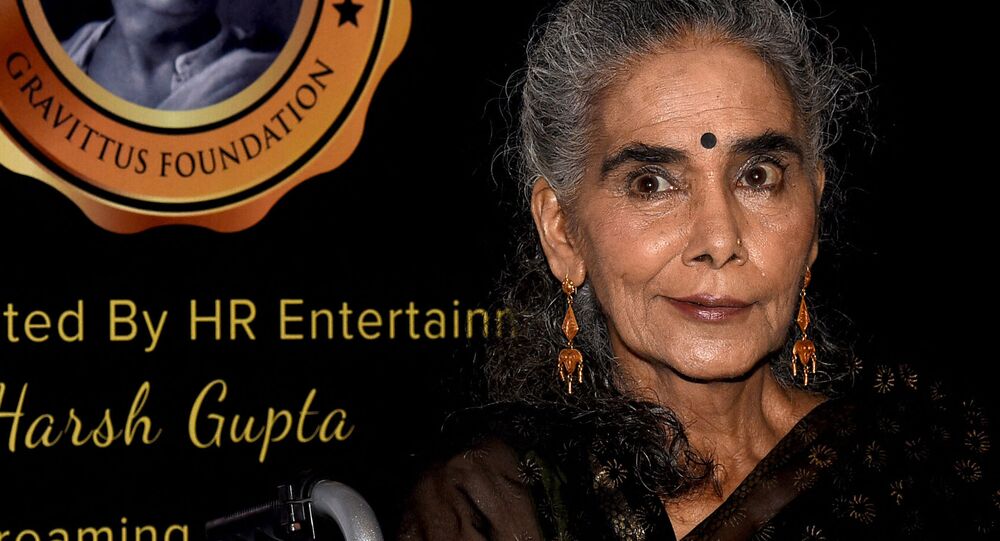 In a career spanning five decades, veteran Bollywood actress Surekha Sikri, carved a niche for herself and attracted an adoring army of fans for her theatre, television and Bollywood work. She was awarded the National Film Award's highest honour three times winning Best Supporting Actress in 'Tamas' (1988), 'Mammo' (1995), and 'Badhaai Ho' (2018).

Veteran Bollywood actress Surekha Sikri’s death of a cardiac arrest on Friday has left celebrities and her millions of fans heartbroken.

Born in India’s Uttar Pradesh state, Surekha graduated from the National School of Drama (NSD) in 1971.

The actress, who made her debut in the 1978 political drama film 'Kissa Kursi Ka', left a lasting impression with her performance in the film ‘Badhaai Ho’. She was also fondly remembered by her fans as the 'Dadisa' (grandmother) of the TV series ‘Balika Vadhu’.

The actress was last seen in a Netflix anthology ‘Ghost Stories’ in the episode helmed by director Zoya Akhtar.

Describing her as an "artiste par excellence", Bollywood celebrities have taken to social media to pay their condolences to the actress’ family and share their experience of working with her on-screen.

Actress Dia Mirza said that there was "no one like her” and Swara Bhasker in her tribute said that Sikri was a “stellar performer” and “just watching her was like witnessing a master class”.

There is no one like her. Absolutely no one. What an extraordinary woman. An artist par excellence. Those eyes and that smile 🤩 Her craft will inspire generations of performers. Was lucky to have the chance to witness her magic in person 🙏🏻✨ #RIPSurekhaSikri pic.twitter.com/UXxXKUNdVK

She was a force of nature if ever there was one. Hence I won’t say rest in peace but RAGE in peace Surekhaji. As you did,during your time on earth! 🙏🙏🙏 https://t.co/fg79qdGb7U

RIP #SurekhaSikri ji ! 🥺🥺🙏🏽🙏🏽
A stellar performer.. just watching her was witnessing a master class.. deepest condolences to the family! 🙏🏽 https://t.co/oqNzKl7gIC

Author Aseem Chhabra took a trip down memory lane and remembered watching her on stage and on the Doordarshan national broadcaster TV channel in the Seventies, performing with the late actor Manohar Singh. He also called to mind some of her best performances in Hindi and Bengali cinema including ‘Mammo’, ‘Zubeidaa’, ‘Hari Bhari’ and ‘Mr & Mrs Iyer’.

Terribly sad hearing news about #SurekhaSukri. Such wonderful memories of seeing her on stage and DD in the ‘70s, performing with the late Manohar Singh. And those wonderful films w/ Benegal - Mammo, Zubeida, Hari Bhari + Mr. & Mrs. Iyer. Such a loss to Indian theater and cinema. pic.twitter.com/MTeVISQpSa

From actors Randeep Hooda, Gulshan Grover,  to politicians Delhi Chief Arvind Kejriwal, Deputy Chief Manish Sisodia and many others remembered the actress' legacy of work, in their tributes.​

Few actors are as versatile & accomplished as Surekha Sikri ji. She was an institution. Young actors must watch her work. RIP🙏 pic.twitter.com/y1sEA1iSXG

RIP Surekha ji #SurekhaSikri ! Had the great fortune of working and learning from you so much in my Theatre days and than watching your superb performances ! https://t.co/m97R6BWtMx

Netizens are flooding social media with video clips of the actress who received a standing ovation while she collected her National Award. Some have posted clips of her recitals of poetry, admiring her enigmatic personality and poise.

The respect and honour she received and deserved. What an amazing journey has it been for #surekhasikri. Here is a clip from the National Award she received with that standing ovation 👍🙏 pic.twitter.com/SDkQQsN0pH