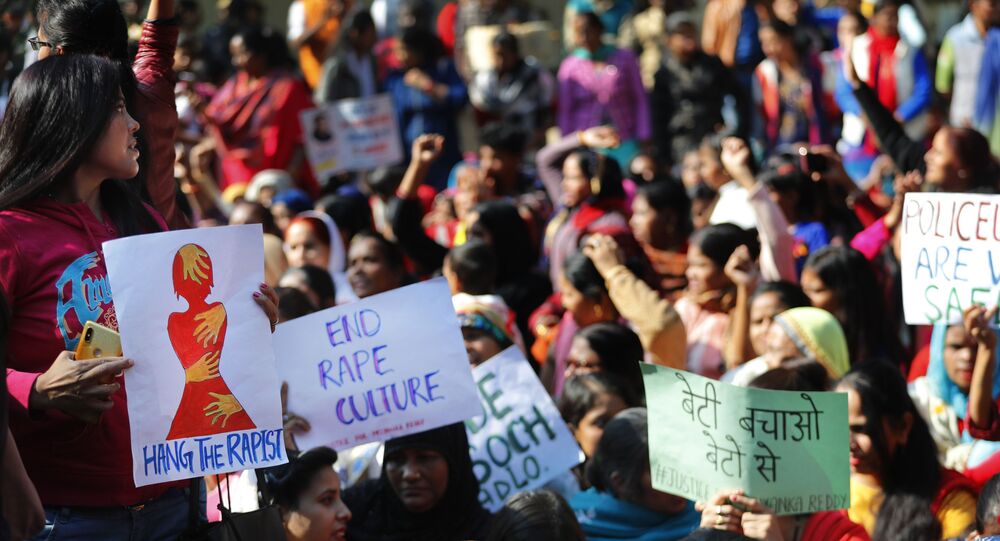 Demonstrations to express public outrage have increased in frequency in India, as cases of crimes against women - including brutal rape, abduction, etc - continue to be perpetrated. The federal and state governments have time and again promised justice in such cases. But crime data shows the situation is worsening.

An aggressive initiative to prevent crimes which are usually carried out against women has been launched by police in Delhi, as the city is witnessing a massive surge in crime cases.

According to Delhi Police officials, the move should restore the confidence women have in the local constabulary. The deputy commissioner of Delhi Police (Northwest District), Usha Rangnani has stated that the initiative named "Safety and Empowerment" is groundbreaking and is being carried out by women constables.

"The purpose is to sensitise women in the areas and their guardians, or families, about the trend of crime against them, such as rape, sexual assault, domestic violence, child abuse, or their harassment for dowry," Rangnani said in a statement.

The officer added that as part of this initiative, women constables would provide doorstep policing for identification and so that the grievances of women within the community may be redressed.

"Women police officers build confidence among women with regard to their own safety in the immediate environment. The purpose is to sensitise the area's women, girls and their guardians or parents about crimes against women ... and to empower them to tackle the unwanted situations," she revealed.

"Incidents of female kidnappings have increased from 1,026 to 1,580, abduction of women from 46 to 159, and dowry deaths from 47 to 56," the statistics which Delhi Police shared with Sputnik showed.

"Female constables are motivating young women and little girls to report the cases of violence against them," Rangnani stated.

​Police officials said they have analysed several stretches across the city where the women commuters feel unsafe.

"We have already increased patrolling in isolated stretches and will be raising the connectivity issue for women during late hours with the authorities," Chinmoy Biswal, public relations officer of Delhi Police said.

Over the years, the AAP government has installed CCTV cameras, put marshals on buses and even installed more than 200,000 street lights. However, despite all the efforts the incidence of crime is going up.

Sputnik spoke to a neuropsychologist to understand the reason behind the massive surge in crime and learnt that the frustration of being locked inside their house or being unemployed is one of the main reasons behind it.

"A lot of people are getting frustrated sitting inside the houses and not being able to go out and live a normal life. Shortage of employment is also playing a vital reason as people are heading into depression," Sana Khullar, a neuropsychologist revealed.

"So, here power dynamics comes into play and the chances of women being subjected to such abuse increases," Khullar added.

On the other hand, the Delhi Government has said that they would continue to work towards the safety of women.