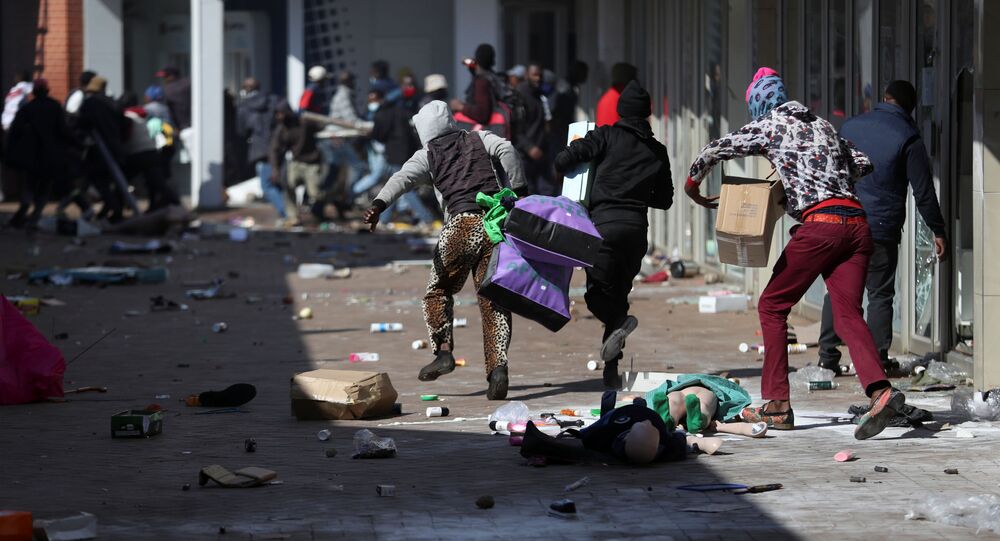 South Africa’s ruling African National Congress (ANC) has disowned the rioters, with authorities claiming that protests have been “hijacked” by criminal elements. Many observers argue that the worsening economic situation because of the COVID-19 pandemic has made the looting worse. More than 50 percent of South Africans live in poverty.

Indian foreign minister Subrahmanyam Jaishankar on Wednesday discussed the ongoing rioting and vandalism with his opposite number in South Africa, Naledi Pandor, as violence and looting by supporters of jailed former president Jacob Zuma spread to Indians resident in the country and the white suburbs.

Appreciate the conversation with South African Foreign Minister Naledi Pandor today. She assured that her Government was doing utmost to enforce law and order. Early restoration of normalcy and peace was the overriding priority.

​79-year-old Zuma, a member of the African National Congress (ANC), served as South Africa’s president between 2009 and 2018. He handed himself in to the police on 7 July to serve a 15-month jail term for contempt of court because he had refused to appear at a corruption enquiry. The ANC veteran is accused of favouring an business conglomerate which originated in India and is run by the Gupta Family, with lucrative contracts during his term in power.

His arrest triggered massive protests, accompanied by looting of businesses, in KwaZulu-Natal and Gauteng, the nation’s two most populous and urbanised provinces.

The looting and violence by his supporters prompted President Cyril Ramaphosa to bring the army in to patrol the streets of major cities, including Durban, Pietermaritzburg and the nation’s capital Johannesburg.

Despite massive security, vandals continued to wreak havoc in the streets of the BRICS nation through Tuesday. According to reports and social media videos, several Indian and white neighborhoods around cities such as Durban and Johannesburg have been targeted by Zuma's predominantly black supporters.

In Durban particularly, vandals from South Africa’s dominant black community reportedly entered suburbs inhabited by whites and Indians. In response, members of both communities could be seen taking up arms to ward off the intruders, sparking fears of race riots.

The armed response was backed by KwaZulu-Natal’s premier Sihle Zikalala in a press conference on Tuesday.

Tense social media videos from Durban have triggered concerns in India. Durban is often described as the biggest Indian city outside India, because of historic links with the subcontinent and the fact that more than a million people of Indian origin live there.

@piersmorgan Please help!!! My city Durban, South Africa has been destroyed by the local Zulu people!! Please get this story out. Malls are still on fire, they even burnt a hospital!! All lives should matter. The Indians, Whites and Coloureds are under attack. No help at all. pic.twitter.com/wRNV0Ptjea

​South Africa’s Police Minister Bheki Cele said on Tuesday that more than 1,200 people across both the provinces have been arrested in connection with rioting and vandalism.

South African Police Major General Mathapelo Peters said in a statement last evening that 27 deaths were being investigated in KwaZulu-Natal and 45 in Gauteng. She added that most of the deaths occurred in “chaotic stampedes” during looting.