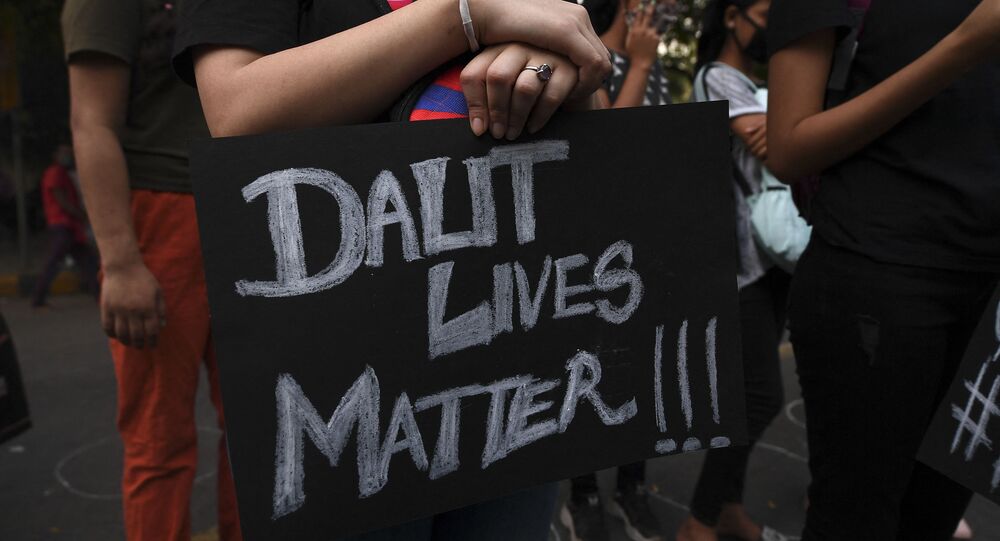 State assembly elections for Punjab in northern India are due to take place early next year. The ruling Congress Party faces stiff competition from the strongest regional party, Shiromani Akali Dal, which recently ended a three-decade alliance with Narendra Modi's Bharatiya Janata Party and instead allied itself with Bahujan Samaj Party.

The alliance between Shiromani Akali Dal - which ruled Punjab for a decade before Congress party took over in 2017 - and Bahujan Samaj Party, is being described as a "game changer" which will affect state politics in the run-up to the elections.

In 2019, 39-year-old Jasvir Singh Garhi has been elected and then appointed by the Bahujan Samaj Party as state party chief. Garhi quit his government job to accept the post which includes the seemingly impossible task of bringing unity to a vote base of 37 percent Dalits (the so-called untouchable caste), minority and backward classes that comprise Punjab's population.

Sputnik : Shiromani Akali Dal (SAD) has ended its three-decade alliance with Bharatiya Janata Party over the issue of controversial farm laws that the BJP brought at the federal level. What makes you think that SAD's alliance with BSP will bring positive poll results?

Jasvir S Garhi : The policies of the BJP-ruled federal government have cost the masses dear. People at grassroots level blame the second wave of COVID-19 that left thousands dead on the BJP's faulty policies and mismanagement. Also the abominable caste politics in which both the BJP and Congress brazenly indulge in has affected the life and livelihood of millions of people in the oppressed and minority castes. Our Bahujan Samaj Party has not won any assembly seats in Punjab since 1997 although this is the very same party that had nine members of the legislative assembly and one Member of Parliament in 1992. Despite this, the cadre at the grassroots level is very strong and SAD's support gives us the teeth we have lacked so far to fight. SAD's alliance gives us tremendous optimism.

Sputnik : You have said that caste politics is very strong in Punjab. How is that? How much does caste matter in casting votes?

Jasvir S Garhi : Punjab state is unique because it is the stronghold of minority communities in India. The state is 58 percent Sikh (those who follow Sikhism religion) and more than 35 percent is Dalit and oppressed classes. Supporters of Congress in the state traditionally belong to the upper castes and BJP voters are conventionally Hindu nationals. Shiromani Akali Dal has a very large voter base that comprises farmers, members of Jat community besides others. Bahujan Samaj Party also represents the interests of the so-called lower castes that are the most  marginalised communities particularly where education and finance are concerned.

India has failed to make rapid advances and remained backward largely because of caste discrimination. It is part of the society, a regressive thought that has deep roots, an unfair bias against the so-called lower castes who are still the most downtrodden in society even after 72 years of independence.

Sputnik : What burning issues in Punjab will the ruling government be targeted with during the elections? What will the SAD-BSP manifesto look like?

Jasvir S Garhi : Congress government in the state has failed to honour almost all its promises. Captain Amarinder Singh, chief of Punjab, is facing severe criticism on how COVID-19 was handled. Government staff, serving as contractual workers, were literally threatened with the sack unless they returned to work at the height of the pandemic. Hundreds and thousands of teachers were sacked and beaten with sticks when they gathered to protest against government policies. The abuse of drugs among the youth is one burning issue that Congress had promised to solve but failed even to tackle.

Education, employment, health - these are the three major areas we will focus on in our manifesto. After those, sustainable development protects the quality of air, water and earth.

Sputnik: An internal rift in the BSP has been reported after you were elected as the state chief last month. How are you dealing with the rebels within?

Jasvir S Garhi : Bahujan Samaj Party functions uniquely. The discipline within the party is very strong and leaders are not encouraged to voice differences with the party high command. We are trained just to say "Yes" if the party head asks us to do something. Anyone who refuses is promptly sacked. This happened with the past state chief who was sacked for having a opinion that didn't chime with the opinion of the party supremo, Mayawati. But, since I have joined I have managed to bring a lot of people together and enjoy solid support from party workers.