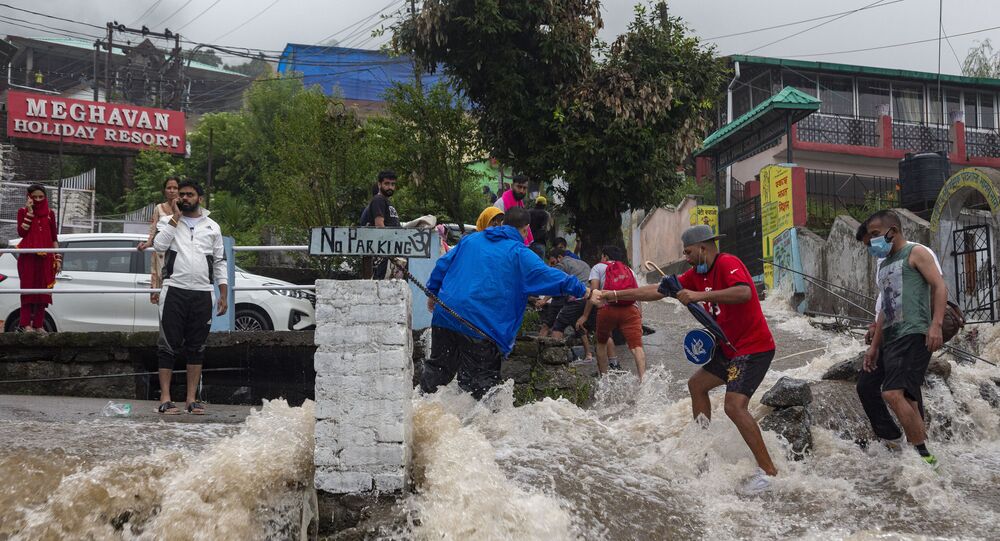 The India Meteorological Department (IMD) has forecast has issued an “orange level” warning in the state as extreme weather wreaks havoc.

A cloudburst at a popular tourist destination in India’s Himachal Pradesh state has triggered flash floods, officials said on Monday.

Speaking to Sputnik, a senior police officer said the cloudburst occurred in the Kangra District in the morning. No casualties have so far been reported.

The footage also shows several cars being swept away by the water. Several hotels and properties have also been damaged.

When you concretise an absolute beauty, receiving more than 3000mm of rainfall in Monsoon, where will the water go?
🎥Siddharth Bakaria pic.twitter.com/FZhJbNFCDx

Flash flood in #Bhagsunag nullah in #Dharamshala due to heavy rainfall...#HimachalPradesh pic.twitter.com/pGlqnheUFJ

​Police officials said the downpour has blocked the national highway of Shimla District, a popular tourist destination, while water levels in the state's major rivers continue to rise following the monsoon rains.

Videos shared by Twitter user shows the magnitude of the flash floods.

Orange Alert in #Dharamshala in #HimachalPradesh after a huge cloud burst pic.twitter.com/D52FHzN0Wk

​Authorities in Himachal Pradesh are concerned for the safety of tourists in the area.

"We have been raising the issues to stop travel to our state. People from different parts are coming here and chances of the virus spreading are increasing. Now with floods, people's lives are at risk,” said Vipin Chandra from the Kangra District.

“Apart from the locals, tourists will also be stuck as the highways will be shut down and chances of cloudburst or landslide will increase with Monsoon," he added.