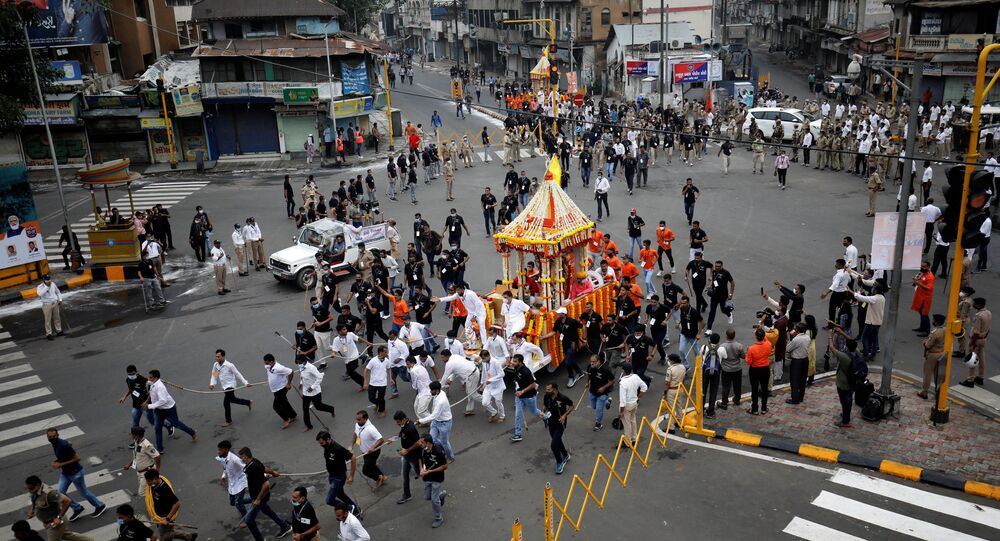 A heavy security presence has been deployed to the city of Puri in India's Odisha state - as the gods from the Shree Jagannath Temple board their chariots to visit other temples. This festival is called the "Rath Yatra" and it holds major religious significance for the Hindus as it is when the idols of the gods come out to meet their devotees.

Devotees will not be able to participate in the annual "Rath Yatra" , or chariot festival, for the second time in a row this year, as it commenced in India's Puri city on Monday amid fears of a third COVID wave outbreak.

With mentions in ancient Hindu scriptures, the city's "chariot festival" is believed to be one of the oldest "Rath Yatras" in the world.

As part of rituals, idols of three deities - Lord Jagannath, his brother Balabhadra, and sister Subhadra - are placed on three giant, decorated chariots before being pulled by devotees with ropes from the city's sacred Temple of Shree Jagannath.

After battling the deadly second wave of COVID between April and May, India is still recovering and taking measures to delay the predicted third wave.

In light of the pandemic, residents of the region have been asked to pray at home and light earthen lamps on their porches, terraces and balconies to mark their participation in the Rath Yatra.

Usually, millions of people from around the world gather in Puri to witness the spiritual euphoria. However, this year, the chariots are being carried to the other temple only in the presence of priests and security forces.

Here is how Puri looked on the day of the Rath Yatra before COVID existed:-

A post shared by INDIA WAKES UP 🇮🇳 (@indiawakesup)

As per visuals obtained by Sputnik from the Jagannath Temple authorities, priests can be seen standing on the outer fronts of the chariots,  ringing bells and chanting Sanskrit mantras to begin the auspicious festivities this year.

Visuals obtained by @SputnikInt - the presence of priests and police officials, the grand Rath Yatra for Lord Jagannath commences in Puri. pic.twitter.com/0neFWSlZb6

Obtained by @SputnikInt The roads from where the chariots carrying the idols of Hindu deities will proceed are being washed.

As is noticeable - only some people on the streets.. pic.twitter.com/9ngLOiz0nC

​A police official from the Town Hall station of Puri told Sputnik that security personnel have been deployed around the city to make sure that emotional devotees do not break COVID protocols and risk lives in the process.

Presently, prayer ceremonies are underway to bless the chariots that will carry the deities -- and the pulling of the chariots towards the next temple will begin later in the afternoon.

Meanwhile, Prime Mininster Narendra Modi and President Ram Nath Kovind have extended greetings to the citizens of the country, marking the auspicious day.

Greetings to everyone on the special occasion of the Rath Yatra. We bow to Lord Jagannath and pray that his blessings bring good health and prosperity in everyone’s lives. Jai Jagannath!

​Previously, mass gatherings for the festivals of Kumbh Mela and Ganga Dussera resulted in a major COVID outbreak among attendees.

With fears of dangerous COVID variants emerging in parts of India, the authorities ensured that the massive celebration of Rath Yatra is conducted without letting devotees gather as the daily caseload has recently decreased.