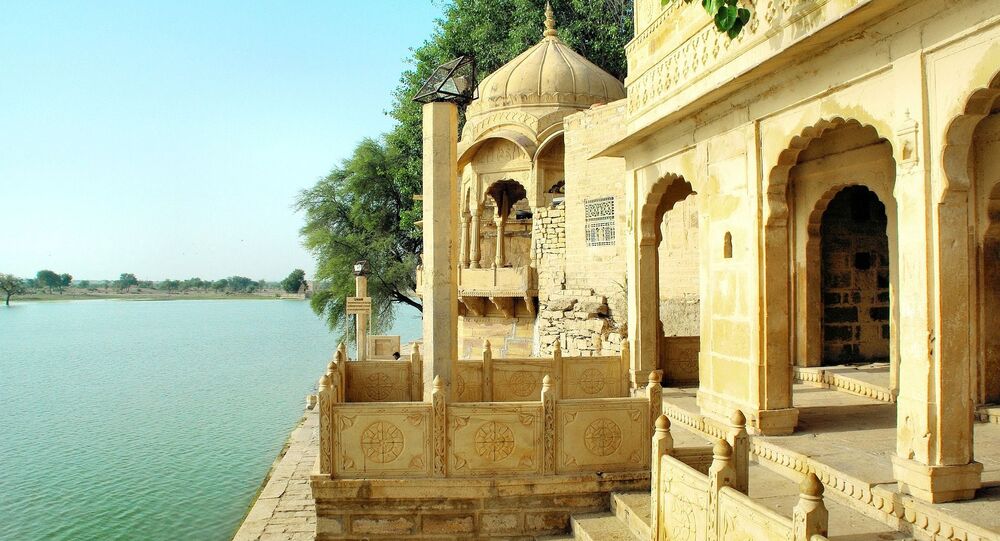 The brilliant ancient architecture of world wonders like the Pyramids of Egypt are well-known among travellers. Less known are the extraordinary, mammoth-sized ancient temples that are to be found throughout India. One such lesser-known architectural destination is in Central India's Khajuraho.

A cluster of 25 sand-stone temples, housing the idols of Hindu deities Shiva, Vishnu and goddess Shakti flank India's glorious ancient architecture in the city of Khajuraho. But what's most attractive about these 9th century temples is the carvings on their outer walls, which are fondly known as the "catalogue of desires".

Inspired by the daily lives of people back then, these temple carvings show men and women living their daily lives - working, playing, and indulging in different kinds of sexual pleasures with one or multiple partners. Hence, these temples are also famous as the "Kamasutra mandirs".

For those unfamiliar, "Kamasutra" is an ancient Indian Sanskrit book that is believed to have been written between 400 BCE and 200 CE which is attributed to a philosopher named Vatsyayana. The scripture is touted to be one of world's first records of love-making and pleasure.

Speaking to Sputnik, independent tour guide Sachin Dwivedi from Khajuraho said the amount of promotion that the Taj Mahal or the Hawa Mahal in Jaipur get from the government, is far more than what the unique temples of Khajuraho have ever received.

"The land of Khajuraho is just as spiritual as that of Banaras and the architecture is even more awe-striking than that of the Egyptian pyramids. Still however, only a few thousand visitors come here every year. I blame the 'misrepresentation' of the image of this place. These carvings on the walls are not intended to make one feel uncomfortable -- their meanings are deeper and people must be informed about that before whatever little buzz we have also dwindles," Mishra said.

Between 2006 and 2015 - long before COVID even arrived, the maximum number of tourists that reached Khajuraho's World Heritage Site was around 279,000, out of which only around 65,000 were foreigners, a 2015 research report claims.

The iconic Taj Mahal in Agra on the other hand, witnessed over 4.4 million domestic visitors alone during 2020 - when the pandemic was at its peak.

According to the guide, who claims to have been in the business for over 20 years now, foreigners' jaws drop once they see the enormous temples carved out of stone with basic ancient tools - displaying examples of supreme engineering, precision and finesse.

Sputnik/Sachin Guide
Carvings on The Walls of Temples in Khajuraho, India Showing Mystical Creatures and Humans In Pleasure

During the Chandella dynasty between 900 AD and 1130 AD, the ruling kings started to create palace-like temples, which depicted the lives of people during their rule. Expensive and unique Idols of Indian gods and goddesses were ritualistically placed inside these temples by the Chandella rulers -- implying that gods were always watching over their subjects from the centre.

Speaking to Sputnik, a local priest from Kjahuraho explained that these carvings depict elements of existence for humans in the world.

"At one time, every person exists in two lives -- one 'sansaarik' -- social, and the other 'aadhyatmik' -- spiritual. Sex is a major part of people's social lives - after all it is the reason why global society exists in the first place. When the Chandela rulers were building these temples, which were originally 75 in number, they wanted to document everything that life was about in that era, and that included the act of consummation," said Hindu priest Ram Chandra Tiwari.

As per both, Sachin Guide and Tiwari, well-read tourists often notice that the temples of Khajuraho are a testament to what was once a more open and accepting society in India -- which long ago did not frown upon same-sex relations.

"For what it's worth, these temple carvings also show multiple partners indulging in sexual activities -- hinting that back in the 9th century, society was much more progressive than what it is right now," the locals said.

Tiwari further noted that the external architecture of the temples were representations of the social lives, but the interior art-work depicted ways to stay closer to one's conscience as well as god.

"Apart from the sex sculptures, the outer temple walls also show men and women interacting with animals, cooking, fighting and eating -- the activities that all make for a person's daily social lives. The inside of the walls however, has wall carvings showing people praying, meditating and exercising -- all of which keep one rooted," the priest added.

The temples further show that ancient Indians were more "body positive" than they are today.

The female figures carved on the temple walls show them slim as well as overweight, something that observers often point out, the priest added.

Sputnik/Sachin Guide
Being Curvy Wasn't Crime in Ancient India, As Temple Carvings at Khajuraho Document From the 10th Century

An Urge to the Indian Government

Today, more than a tourist attraction, Khajuraho is popular as a wedding destination for central Indians. The residents there however, believe that depending on just wedding events cannot sustain their economies. Around 85 percent people in Khajuraho work in or with the tourism industry and had been facing losses even before the COVID era.

Some more locals from Khajuraho that Sputnik got in contact with have collectively requested that the government of Madhya Pradesh state as well as the central government save the ancient city from getting lost in the forgotten folds of history.

"In 2014 when Prime Minister Narendra Modi's government came to power, we were brimming with expectations. As years progressed however, our hopes started vanishing. The government is creating new destinations for visitors to check out like Sardar Vallabhbhai Patel's statue -- which is great -- but that should not mean that the existing wonders we do have should be pushed aside," said Pankaj Tiwari who manages an lodging facility for tourists in Khajuraho.

These temples are mystical, the locals claimed, and must be visited and spoken about more that they are.

Sources from the state's ruling Bharatiya Janata Party (BJP) told Sputnik that as soon as the pandemic woes ebb and its safer for people to travel, the state tourism board will further begin boosting Khajuraho and other local tourist destinations.