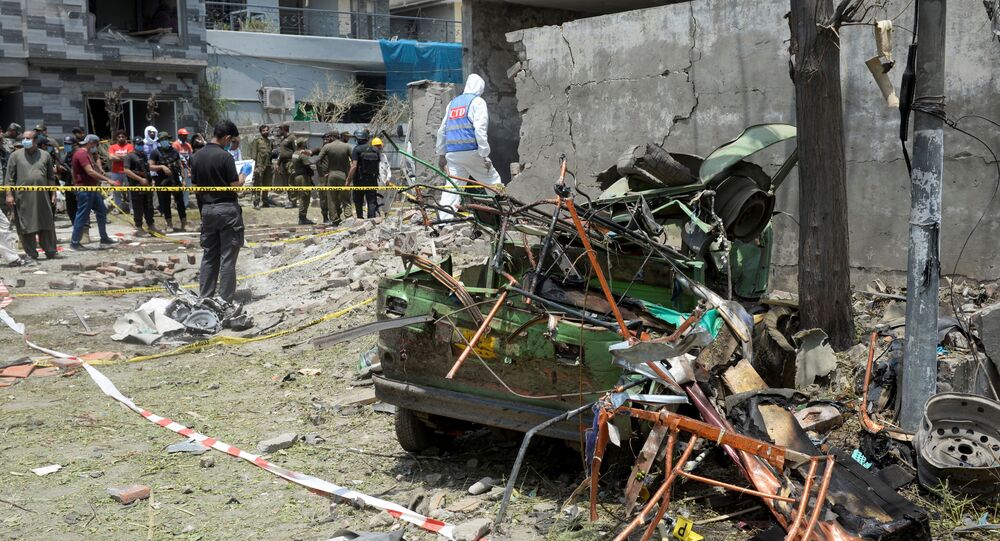 Three people were killed and 24 others injured in the deadly explosion in Lahore on 23 June, which took place near the residence of 26/11 Mumbai terror attack mastermind Hafiz Saeed, a UN-designated terrorist who runs the Islamist-linked charity Jamaat-ud-Dawa (JuD). JuD is widely recognised as a front for terrorist outfit Lashkar-e-Taiba (LeT).

“Pakistan would do well to extend the same efforts in setting its own house in order and taking credible and verifiable action against terrorism emanating from its soil and against terrorist who find safe sanctuaries there”, Indian Foreign Ministry spokesperson Arindam Bagchi said in response to a question from Sputnik during a weekly briefing.

“The international community is well aware of Pakistan’s credentials when it comes to terrorism. This is acknowledged by none other than its own leadership, which continues to glorify terrorists like Osama Bin Laden as martyrs,” the Indian official added.

“I can tell you with full confidence that this [Lahore] attack is directly connected to India’s sponsorship of terrorism against Pakistan”, claimed Yusuf.

Speaking at the presser, Inam Ghani, the provincial police chief of Punjab (where the city of Lahore is located), disclosed that three Pakistani nationals were arrested for allegedly carrying out the attack.

Ghani and Yusuf, however, refused to disclose the identity of the Indian “mastermind”, despite repeated questions from Pakistani reporters.

The blast on 23 June in Lahore’s Johar town locality took place after a bomb planted inside a black-coloured vehicle exploded, killing three people and injuring 24 others. 12 vehicles were also damaged in the blast. Closed-circuit television (CCTV) footage accessed from the site of the explosion shows a man in a black top and lower (salwar-kameez) exiting the vehicle nearly 30 minutes before the bomb exploded.