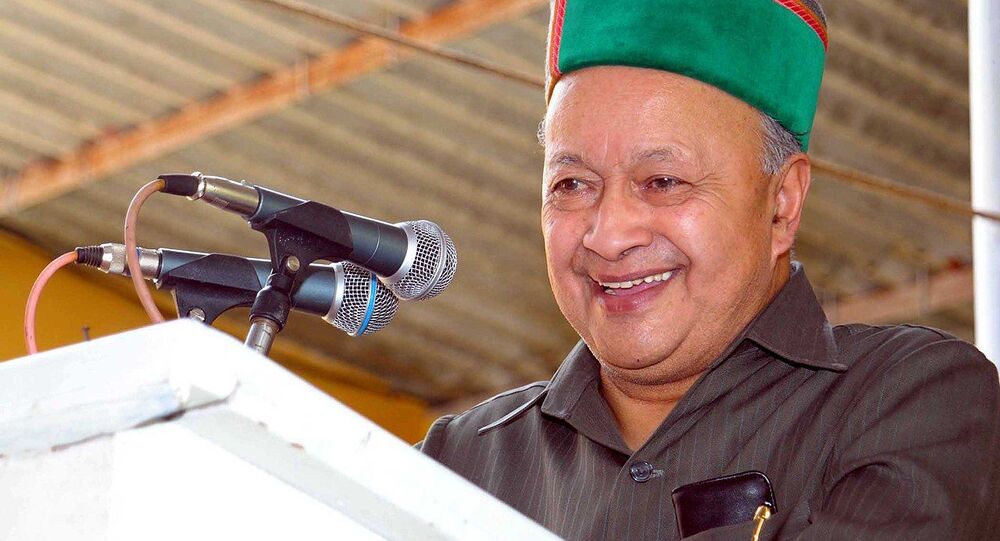 Having started his political career at the age of 27, Virbhadra Singh went on to serve as a member of parliament for five separate terms. Singh was popularly known as "Raja Sahib" (the King) as he belonged to the royal family of Rampur Bushahr, a town and council in the state's Shimla district.

Veteran Congress leader and six-time state chief of the northern Indian state of Himachal Pradesh Virbhadra Singh, 87, passed away in the early hours of Thursday.

After suffering a heart attack on Monday, he was admitted to the Indira Gandhi Medical College and Hospital in Shimla. He had tested positive for COVID-19 twice, once on 12 April and again on 11 June.

Singh's wife Pratibha Singh and the couple's son Vikramaditya Singh are also politicians. His wife is a former parliamentarian, while Vikramaditya is a member of the legislative assembly from the Shimla rural constituency.

As a mark of respect for the former state chief, the Bharatiya Janata Party-led Himachal Pradesh state government has announced a three-day state mourning from 8 to 10 July.

Leaders from across the political spectrum expressed grief over the demise of Singh.

In his message of condolences, Prime Minister Narendra Modi described him as a leader who played "a pivotal role in Himachal Pradesh".

Shri Virbhadra Singh Ji had a long political career, with rich administrative and legislative experience. He played a pivotal role in Himachal Pradesh and served the people of the state. Saddened by his demise. Condolences to his family and supporters. Om Shanti.

​Congress parliamentarian and former party chief Rahul Gandhi described him as "a stalwart in the true sense".

Shri Virbhadra Singh ji was a stalwart in the true sense. His commitment to serving the people and to the Congress party remained exemplary till the very end.

My condolences to his family and friends. We will miss him. pic.twitter.com/GjXbe6zQnV

​Congress General Secretary Priyanka Gandhi Vadra also mourned his passing, saying: "The demise of former state chief and senior Congress leader Shri Virbhadra Singh is a huge loss for all of us. He maintained a high stature in politics and took Himachal Pradesh state to new heights. May his soul rest in peace. Humble tributes".

Saddened to learn about the demise of Former Himachal Pradesh CM Virbhadra Singh Ji. He will be always remembered for his service to the nation. My heartfelt condolences to his family members and followers. Om Shanti!