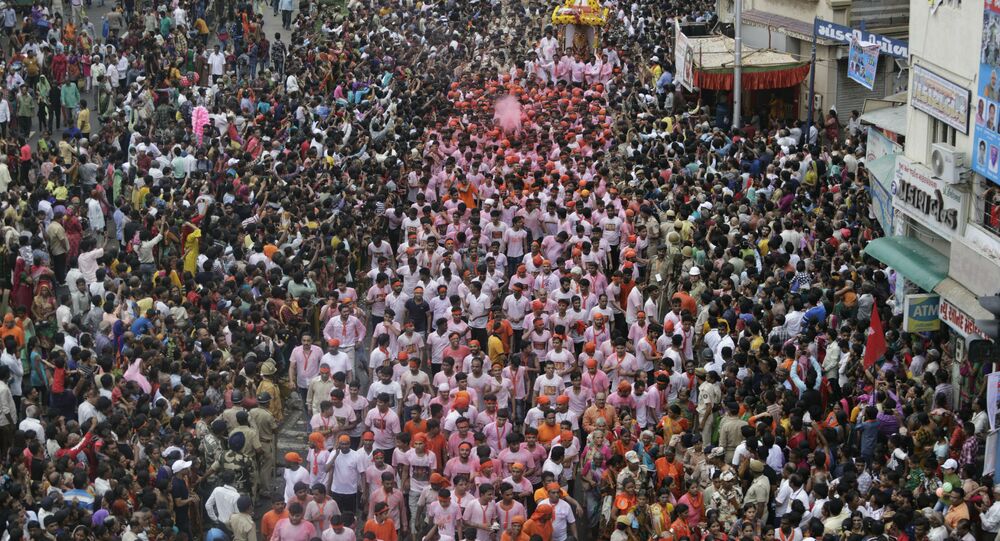 During the second wave of COVID, which reached its peak in India between April and May, the Hindu religious gathering of Kumbh Mela in Uttarakhand state resulted in a fresh outbreak. Fearing a potential third wave, Indian authorities are trying to ensure that no mass gatherings spiral out of control.

Administrative authorities in the Indian city of Puri have asked people not to flock to the streets as part of the famous "Rath Yatra" (chariot festival) of Lord Jagannatha. The city usually witnesses a massive congregation of devotees from India and abroad on the occasion.

With mentions in ancient Hindu scriptures, the chariot festival held in Puri each year is touted as one of the oldest "Rath Yatra" in the world.

As part of ritual, idols of three deities - Lord Jagannatha, his brother Balabhadra, and sister Subhadra - are placed on three giant chariots before being pulled by devotees with ropes from the sacred Temple of Shree Jagannatha.

The decorated chariots, carrying the idols, are taken to two other shrines, the Mausi Maa Temple and the Gundicha Temple, after which they are returned to the Jagannath Temple.

Festivities Planned for This Year

In view of COVID restrictions, the city authorities have asked devotees to stand on their balconies and light traditional earthen lamps to offer their prayers to the deities when the chariots go around the city on 12 July.

Talking to Sputnik, a police official from the town hall station of Puri said security along the route of the chariots has been beefed up ahead of the festivities.

"Every year usually, people even from abroad visit Puri to witness this magnificent Rath Yatra. It brings the local businesses loads of profits as well. This year, however, devotees have been asked to stay at home and enjoy the procession from their terraces, balconies or televisions".

"The lessons that the disastrous second COVID wave taught us must not be forgotten. To make sure mass gatherings do not happen, heavy security will be present around the city during the festival days", the official said.

Meanwhile, temple authorities are also trying to ensure that social distancing is maintained among the devotees who come to offer prayers to Lord Jagannatha.

In a conversation with Sputnik, Jagannath Temple official Baikunth Tripathi revealed that in the absence of devotees, the idols of the deities will be taken to the two other temples in the presence of priests and security officials next week.

"This is usually that time of the year when Puri is flooding with people. This year, the celebrations feel emptier without millions of people chanting prayers to Lord Jagannatha. It's definitely for the best however, given the COVID situation. If we act smartly now, God will definitely give us thousands of more years to participate in the Rath Yatra safely", Tripathi said.

Puri locals are divided over how the Rath Yatra festivities are going to take place this year. While many people support the administrative decisions, others are upset with a missed opportunity to take part in such an auspicious annual event.

"Before and after the Rath Yatra, the city glows with joy and happiness. This year, it's pretty dull that way. Some people are thankful that unlike Kumbh, this celebration will not keep the safety of people at stake", Amit Mishra, an optician from the Grand Road area of Puri told Sputnik.

"We have been asked to keep our shops and businesses shut for two days, 12 and 13 July, to avoid any kind of street crowding on the days of the procession. Some devotees are being emotional because of having to miss the festivities, but they must understand that COVID is not over yet", he added.

Mishra further added that annually at around this time, businesses in the city witness a boom; however, this year they will face major losses.

"People's lives are important. We can all make money later", he added.

Every year, traditional dancers and singers perform as part of the chariot procession, as they ferry "gods" around the city. Puri sees millions of devotees gather in celebration and exchange sweets and gifts on the grand occasion.