According to India’s annual Economic Survey, the agriculture sector made up nearly 20% of the country’s overall gross domestic product (GDP) in 2020, the highest in 17 years. Agriculture and associated sectors employ over 50 percent of India’s workforce.

"The Minister informed the Commissioner about the recent reforms in agriculture by India, which aim to restructure the current agricultural system", the spokesperson told Sputnik.

Some of India's agricultural policies, before the new farm laws kicked in last year, were contested by the EU, US, and Canada, among others, which described them as "unfair" due to the government's involvement in the procurement of farm produce and farm loan waivers, among a host of other reasons.

The EU, which was India’s biggest trade partner in 2019 and globally the biggest exporter of farm products, has demanded that Delhi remove tariffs to the tune of 90 percent from farm imports entering the South Asian country. Delhi argues that a reduction of farm-related import tariffs could have consequences for domestic farmers and may also potentially put them out of business.

Delhi and Brussels agreed to resume FTA talks after a summit between Prime Minister Narendra Modi and his European counterparts, European Council President Charles Michel and President of the European Commission Ursula von der Leyen, as well as the leaders of all 27 EU member states. The virtual meeting took place in May this year.

Negotiations for an India-EU Bilateral Investment Protection Agreement (BIPA) had been on hold since 2013 because of concerns India had about the EU demanding greater market access for its cars, farm products, wine, and spirits, among other things. However, New Delhi has been seeking easier work and study visa rules for its citizens in the EU, which it argues would make it simpler for European companies to outsource their businesses to India.

The talks were first launched in 2007.

The expression of support for India’s new farm laws from the EU comes months after the US also backed the contentious legislation, which sparked protests by the country’s farmers.

“In general, the United States welcomes steps that would improve the efficiency of India's markets and attract greater private sector investment", the US State Department said this year.

One of the three new farm laws, the Farmers Produce Trade and Commerce (Promotion and Facilitation) Act, aims to “empower” farmers by allowing them to sell their produce to any seller across the country. Currently, government-regulated wholesale markets are the preferred choice of farmers to sell their produce.

The two other related laws, the Farmers (Empowerment and Protection) Agreement on Price Assurance and Farm Services Ordinance, 2020, and an amendment to the Essential Commodities Act, 1955, are intended to "empower" farmers when dealing with private companies

Despite the Indian government hailing the new legislation, a section of farmers in the country has been protesting the laws, alleging that they would benefit big companies at their expense. 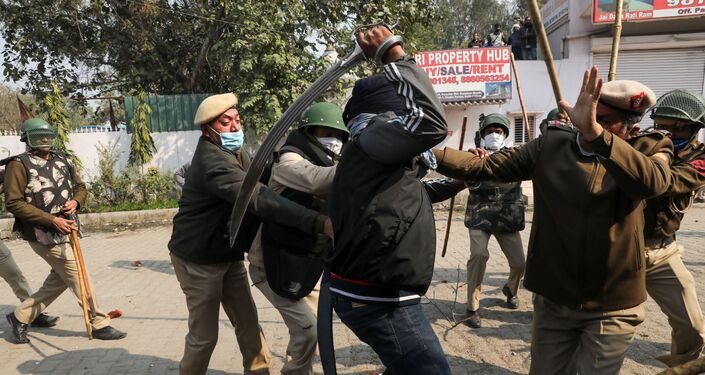 © REUTERS / ANUSHREE FADNAVIS
A man wields his sword against a policeman during a clash between protesting farmers and a group of people shouting anti-farmer slogans, at a site of the protest against farm laws at Singhu border near New Delhi, India January 29, 2021.

Key opposition parliamentarian Rahul Gandhi, who hails from the main federal opposition Congress Party, has also warned that the new farm laws will not only affect farmers, but also the middle class and every Indian household in the form of inflated food prices. Critics of the farm laws claim that the legislation would pave the way for big corporations to enter the lucrative Indian agriculture market and affect the country’s food security.

Protesting farmers have been camping on the outskirts of India’s capital Delhi since November last year, warning that they won’t end their effort until the farm laws are completely repealed.