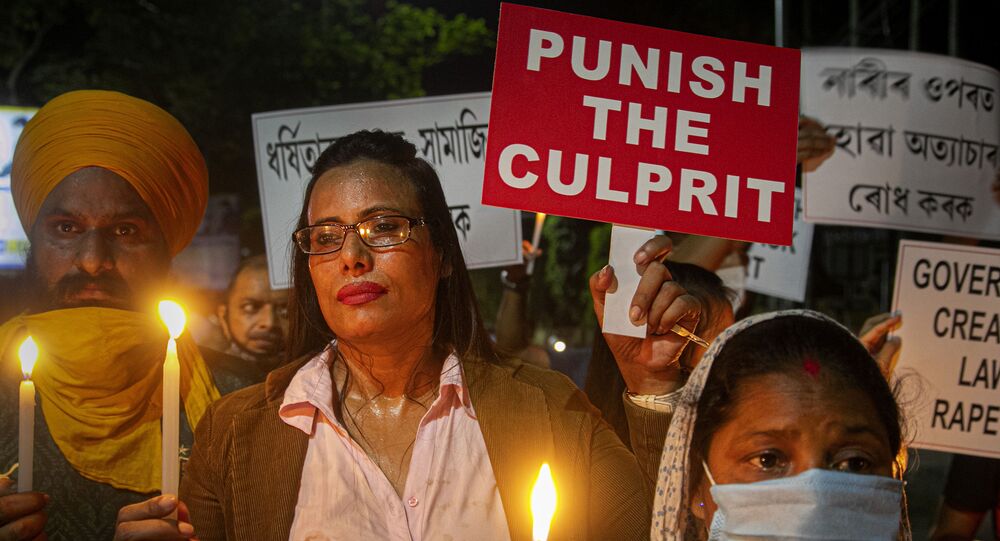 In 2020, the Delhi Police reported a 15 percent drop in crime compared with the number of cases that were registered in 2019. The situation, however, is not the same in the Indian capital this year.

The Delhi Police have revealed in freshly released data that crime against women in the capital witnessed a sharp rise during the first six months of 2021.

Between January and June this year, a total of 833 rape cases were registered in Delhi, marking a 43 percent surge compared with last year.

Snatching incidents have also witnessed a 46 percent rise, totalling 3,800 cases. Street thieves, usually on foot or on two-wheeler vehicles, briskly pull gold chains and wallets from the necks and hands of unsuspecting people and flee. Sometimes attempts at street-snatching result in traffic accidents and even death.

In addition, 942 robbery cases, particularly targeting females, have also been filed in the Indian capital this year so far, the Delhi Police said in their report.

Crime against women in Dehi increased by 63.3% in 2021 till June.rape cases saw an increase of 43%, kidnapping of women 51%, abduction of women 250%, and dowry deaths 21%. The reality of "Beti Bachao, Beti Padhao" shown in Delhi. How shameful.@INCDelhi@Ch_AnilKumarINC pic.twitter.com/12Qgembk7f

​Ranjana Kumari, a well-known social activist, told Sputnik that she was shocked to see so many crime cases, especially against women, happening in public areas.

"Last year during lockdowns, cases of domestic violence had risen. This year however, it is shocking to see so many crimes in public places despite second COVID wave and lockdowns. If at a time all social dynamics stand disturbed, misogynistic men do not change their attitude, it will take a century for Indian women to feel safe in their own localities, cities and countries", Kumari said.

Taking an optimistic approach to the future safety of women, the activist said she has "great hopes from the millennials and the generations following them to bring a revolutionary change with all men respectfully seeing women as equals".

Following a series of shocking rape cases, including the infamous 2012 Nirbhaya gang rape, the Delhi administration has been ramping up efforts to ensure the safety of women in the capital.

The Delhi government has also installed over 200,000 CCTV cameras and street lights to light up dark spots around the city.

Over 14,000 marshals and security officials were also deployed on buses transporting daily commuters around the city, the Times of India reported in March 2020, citing Delhi Police officials.

Last week, Balaji Shrivastava, the newly appointed Delhi Police commissioner, held a crime review meeting with security officers. Shrivastava has directed police officials to keep strict check on the problem of street crime at a time when the capital is gradually going back to normal now that COVID lockdown curbs in the city are being relaxed.

Talking to Sputnik, Taniya Tikoo, a 27-year-old women's rights activist and news industry entrepreneur based in Delhi, said the growing amount of crime against females in the region is a matter of grave concern.

"A lot of crimes against women mainly transpire from the mindset of the perpetrators who have for long felt that women are inferior to them. The need of the hour now is to have local authorities organise gender sensitisation workshops so that men understand the concept of equality and women understand their rights", Tikoo said.