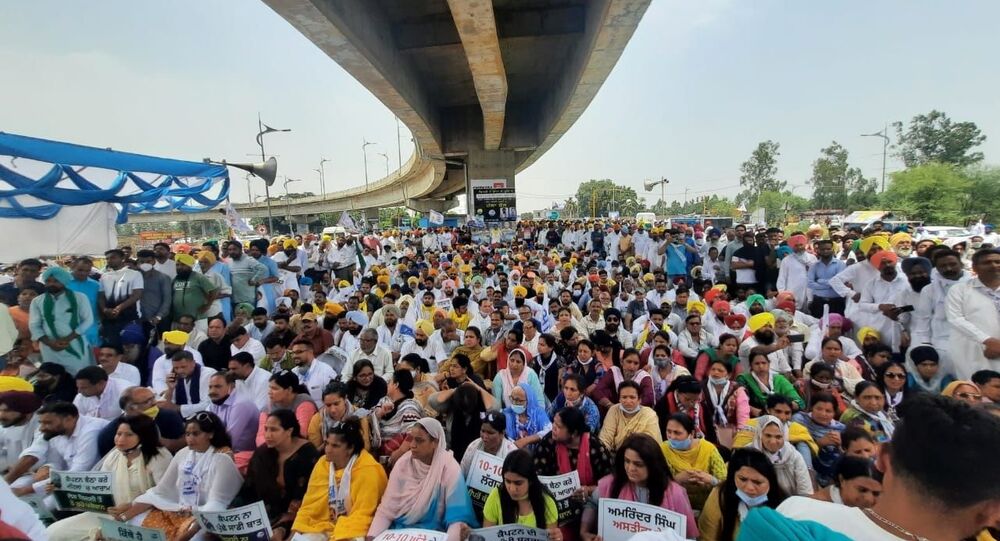 Since temperatures in India's Punjab, known as the nation's breadbasket, soared to over 40 degree Celsius, the state has been finding it difficult to provide power to its farmers who are in the middle of paddy sowing season. As the monsoon, seasonal rain showers, failed, farmers need power to pump underground water to prepare fields for sowing.

India's agricultural state of Punjab, which contributes a maximum share of the country's food grains, is reeling under severe dry weather coupled with an unprecedented power crisis amid the paddy transplantation season. Technical snags in the state's thermal power plants has made them defunct, deepening the power crisis in the area.

On Sunday, a unit of a thermal power plant in the town of Talwandi Sabo was taken out of operation. Another of the plant's units has already been out of order since since 8 March for repairs. Now the plant is only generating 610 MW of electricity, while its installed capacity is 1,980 MW, causing a shortage of nearly 1,200 MW.

This has forced the state government to take drastic measures, including ordering large-scale industries to close down.

The hours of operation for all government offices in the state have been curtailed by three hours, with orders issued to employees not to use air conditioners to save on scarce power.

A two day per week compulsory cut has been imposed on high consumption industries to divert power for crops and the domestic sector.

No Farmer No Food
The punjab haryana govt has failed to ensure the
eight hours power supply to the farmers during paddy season....!!#किसान_मांगे_बिजली pic.twitter.com/diQIRlqxX8

With the mercury hitting 42 degrees Celsius at several places in the state during the week, the demand for power has touched 14,225 megawatt (MW). But the state's power utilities have only been able to supply 12,800 MW. The gap of 1,425 MW has triggered power cuts lasting up to 14 hours a day.

The power crisis, which has persisted for a fortnight and worsened since last week, has led to massive protests across the state.

On Monday, farmers and domestic consumers hit the streets in protest even as industry organisations were complaining about businesses already facing losses due to the pandemic.

Thousands reach Siswan to check how many hours of power outage was taking place at CM @capt_amarinder's grand farmhouse.

❌Captain has failed
❌Congress has failed
✔️INC will be thrown out of Punjab soon!#CaptainDePowerCut pic.twitter.com/J99QYx48jM

A unit of the 210 MW thermal power plant at Ropar in Punjab went out of operation after it developed a snag last week, government officials told Sputnik.

Punjab State Power Corporation Limited Managing Director A. Venu Prasad told Sputnik that the government is extending the compulsory week off imposed on the industry across the state.

"We are working towards fixing the problems. Hopefully, the monsoon rains will hit the state this week and the power demand will climb down", he said.

The power crisis has assumed political significance as the allegedly faulty policies of the Congress-led government are being blamed for the scarcity. Among the first decisions taken by the present government was to shut down the government-run thermal plant in Bathinda and two units of another government thermal plant in Ropar with a combined capacity of 880 MW. No alternate arrangements were made to make up for the shortfall.

In 2018, the state government also refused permission to install a 100 MW solar plant at the Bathinda facility, which was scheduled to come up within a year. Authorities in the state are additionally facing a severe cash crunch, which has made it difficult to purchase power from other sources outside the state.

The paucity of power in the state, which is slated to hold legislative assembly elections next year, has led to a heated political debate.

Opposition parties have hit out at the Congress-led government, which is undergoing "internal turmoil", as leaders within the party are rallying against State Chief Capt. Amarinder Singh.

Even more alarming ! There is No Provision for mandatory supply of power from these Private Power Plants during the peak season under the PPAs... Thus, they have shut down two power plants in this paddy-sowing season without repairing them & Punjab has to buy additional power 4/6