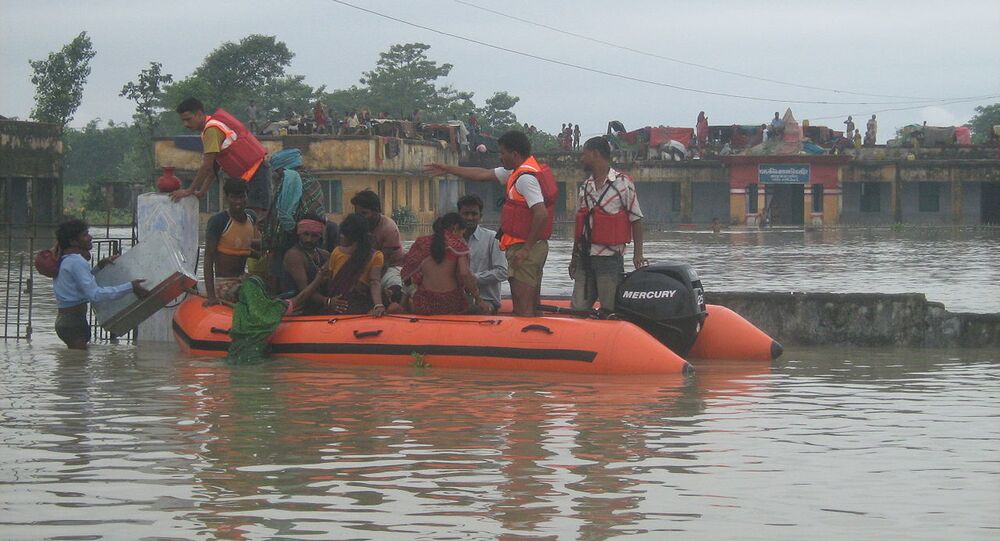 This year, the monsoon season arrived slightly earlier than usual in some parts of India. While urban regions like Mumbai that are situated near water bodies are facing power cuts and road blockages due to rising water, rural Indians living near rivers are losing their lives, livelihoods, and homes.

Several villages in India's Bihar state have been flooded due to heavy monsoons, disrupting the normal lives of local people. At least 21 people have lost their lives in the rain and flood-related situation, including lightning strikes, media reported.

So far, Bihar's administration has not set up relief camps for villagers who have been compelled to leave their homes, residents have told local media.

Talking to Sputnik, police officer Rajiv Rajak of Bihar's Lauriya district said that while the flooding of river-side regions in the state is not uncommon during monsoons, this year the rains arrived early and people were unprepared.

© CC0
Well-Groomed: Indian Man Defies Floods to Bring His Bride Home - Video
"Usually monsoons hit the state between July and August, but this year downpours began intensifying in June itself. People were not prepared. There have been continuous rains in several parts of Bihar for the last few days. Almost all the villages situated near the banks of the Ganges, Koshi, and Burhi Gandak rivers that flow through Bihar are facing issues and are having to migrate to dryer regions", said the police officer.

Heart-wrenching pictures from Bihar have been appearing on social media. People can be seen helping others carry injured people on stretchers to safer locations. Visuals of rural dwellers carrying valuables from their damaged houses in waist-deep waters have also appeared online.

This scene of flood in Bihar is really scary.
Help each other in every possible way... pic.twitter.com/PHHKd41lJi

Homes and lives of people of #Champaran are devastated in the recent #floods in #Bihar. Many other parts of eastern India have suffered in floods and #cyclones in the past one year. We are all citizens of India. What can we do to stand with them?

We are there.. Need you too.. pic.twitter.com/3ydXcDQIrk

​Security personnel from the National Disaster Relief Force (NDRF) and local police officials are patrolling the flooded regions to help people and animals in need.

Officials from the Water Resource Department (WRD) under the Bihar state government have been providing assistance and relief materials to people.

Clouds keep our #FloodWarriors company as they patrol the embankments.

State officials including, Bihar chief Nitish Kumar, have been monitoring the flood situation and a disaster relief package for affected people is expected to be announced in the coming days.

The agricultural state located in eastern India houses the country's third largest population of around 125 million people, as per the survey site Populationu.com.