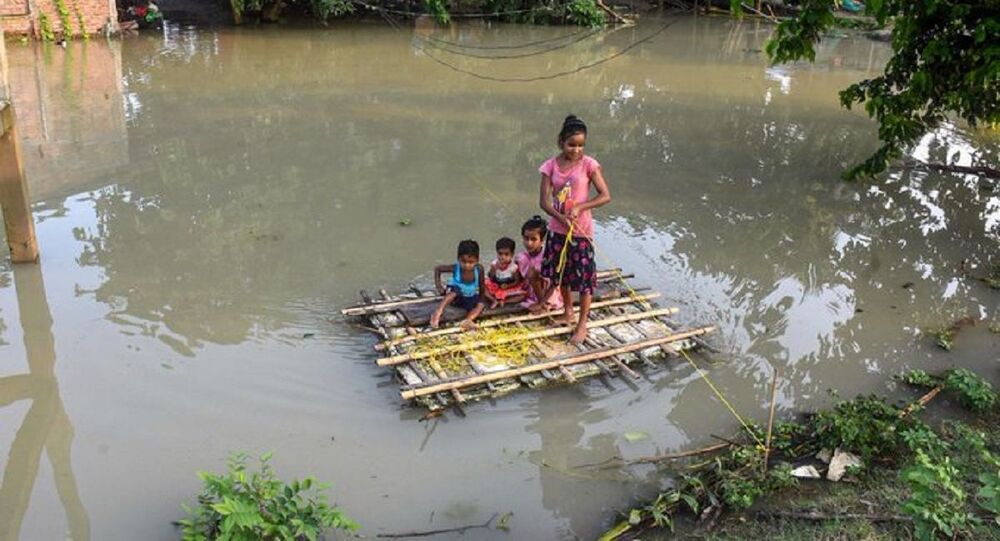 According to India's Meteorological Department, the state of Bihar has recorded 142 percent more rainfall than expected in the month of June. Due to excess rain, the flood-prone regions have completely submerged in river water.

A sub-health centre was washed away by rising floodwater in India's eastern state of Bihar on Sunday, revealing the crippling healthcare system in the state amid the COVID-19 pandemic. A house was also seen collapsing in the Raxaul area of the state.

Due to incessant rain, several small rivers in north Bihar districts have started to overflow their banks.

The national highway in the Sitamarhi district was also inundated, leading to a disruption of vehicle movement.

Two big rivers- the Ganges and Kosi, which flow through the heart of the state, threaten to overspill their banks.

"There’s the need to be extra cautious regarding the relief arrangements for the people in the flood-hit zones. In the last few years, inundation and flooding have become a regular phenomenon in the areas located along the Indo-Nepal borders. This year also, a similar kind of situation is being witnessed. There’s the need to be prepared to face the challenges of relief measures,” she told reporters.

However, the opposition Congress party slammed state chief Nitish Kumar for the lack of preparedness.

Party leaders took to Twitter to raise questions about the ignorance of the state government in providing relief to the flood-affected victims. Last week, Congress leader Rahul Gandhi said, "This disaster is a big tragedy in the time of the Covid-19 pandemic. I appeal to the colleagues of Congress to join the relief work. Steps should be taken to provide help to the people – this is the real ideology of Congress."