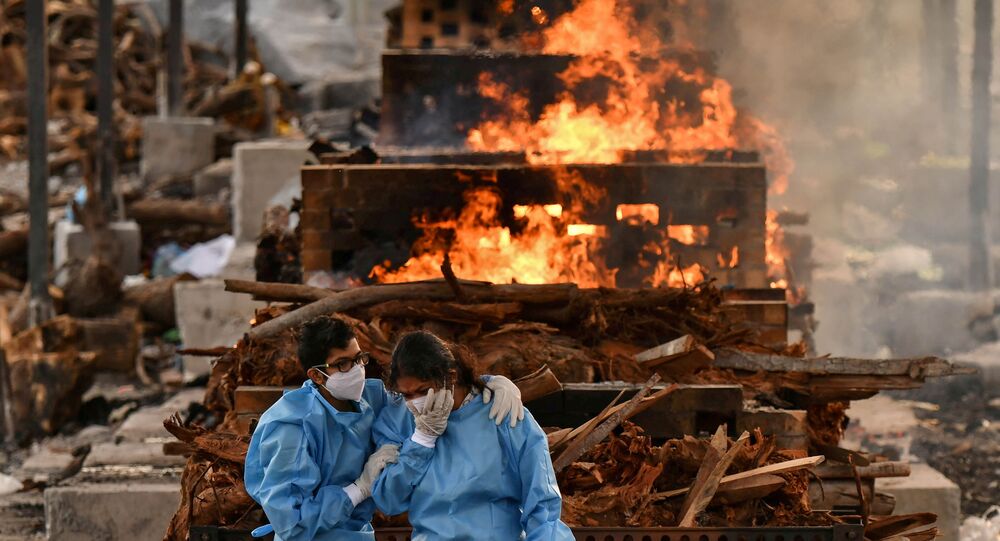 Indian Prime Minister Narendra Modi was quick to declare victory over the coronavirus pandemic in January this year. Then, the second wave of COVID-19 hit India like a wrecking ball. Since April, the Delta variant of the coronavirus, which originated in India, has spread throughout the country and abroad.

During the second wave of the pandemic, Indians were left scrambling for oxygen, medicine, and at times, funeral pyres to cremate their kin. Prime Minister Narendra Modi and federal health minister Harsh Vardhan were reproached for allowing the Kumbh Mela religious festival and five state elections to take place amid a mounting death toll. So far, the virus has claimed the lives of over 400,000 people. Critics placed the blame squarely on officials, calling it “a crime against humanity”.

“In my opinion, the second wave began as early as February this year, when the number of infected patients started increasing. The Delta variant has a high transmission rate. It could have been the Delta Plus variant as well that battered India. As viruses mutate they become more transmissable but less lethal. Misdiagnosis and mistreatment also led to a spike in cases. Patients came to me with fevers, but it showed the virus was in them for 9 days when the test was done. The diagnosis was too late,” Dr Darrell Demello, who has treated over 7,000 COVID-19 patients, told Sputnik.

At the same time, India’s neighbouring countries have also started witnessing a spike in COVID-19 cases.  Bangladesh closed its border with India on 25 April, when the number of cases in the bordering villages started increasing. The government alleged that truck drivers from India are not following COVID-19 protocol and were infecting locals.

© REUTERS / DANISH SIDDIQUI
No PPE, No Vaccine: The Plight of Overworked Crematorium Workers in India’s West Bengal
Bangladesh on 1 July recorded its highest-yet number of deaths in one day, bringing the cumulative toll to 14,646. The country detected the Delta variant in early May and the latest data suggest that 80 percent of the cases are linked to that strain.

Similarly, Nepal, Sri Lanka and Pakistan detected the Delta variant in May. Pakistan and Sri Lanka have shut down air travel with India; Nepal continues to keep its land border open. These countries were left waiting for India’s vaccine shipment, adding to their woes.

The Himalayan country of Bhutan, which has detected only 1 death since the onset of the pandemic, alleged that Indian truck drivers transmitted new virus cases in the Pemagatshel district of the country.

The Delta variant of the virus is now found in over 80 countries, but the south-east Asian countries are scrambling more due to lack of vaccines.

Unveiling the “Vaccine Maitri” (Vaccine Friendship) initiative to supply vaccines to the world, India projected itself as the “pharmacy of the world”. The Serum Institute of India, which produced Oxford-AstraZeneca’s Covishield, supplied 66 million doses to 95 countries.

Bhutan was the first country to receive a consignment of 150,000 doses. To maintain the bonhomie with Bangladesh, India gifted the Sheikh Hasina government 3 million doses of Covishield and supplied another 7 million on payment. Myanmar received 3.7 million doses and Nepal got 2.4 million doses of the Indian-manufactured vaccines.

However, due to the shortage of production, Modi faced a backlash from his own countrymen for failing to meet domestic demand. The country has so far vaccinated only a little more than 5 percent of its adult population.

India’s other vaccine ‘Covaxin’, produced by Bharat Biotech, is yet to provide its Phase 3 data for peer-reviewing. The snail's pace of the development of this vaccination is also blamed for the spike in cases.

India’s production crisis has made the path clear for the Chinese government to play the saviour role. After India’s export ban, Dhaka decided to purchase 15 million doses of China’s Sinopharm vaccine.

Member of the Bangladesh Parliament Nazmul Islam Papon slammed the Indian government for failing to provide vaccines despite Dhaka paying for them in advance. He urged India to “prove its friendship”.

Bhutan, caught in between two giants, India and China, is scrambling for the second dose of the vaccine. When Nepal ran out of Indian vaccines in April, China sent a consignment of 800,000 doses on a grant basis as per the commitment made during talks between the presidents of the two nations.

“India wasn't in a severe crisis when it started with its diplomacy. China could contain the virus well and they had large-scale production so they easily cashed in on the situation. Projecting itself as a saviour, China has focused its supply on the Balkan countries, along with Nepal, Pakistan, Sri Lanka, some East European and Latin American countries. However, there have been questions raised about its efficacy, given the situation in Brazil. The vaccine outreach has stopped these countries from questioning the origin of the virus from Wuhan,” sinologist Dr. B.R. Deepak told Sputnik.

China’s bid to enhance its vaccine supply comes at a setback for Modi, who is struggling with already-tattered ties with its neighbours.

Nepal’s former Prime Minister KP Sharma Oli said, “It has become very difficult to contain COVID-19 due to the flow of people from outside. Indian virus looks more lethal than Chinese and Italian now. More are getting infected”.

But China’s influence on the southeast Asian countries predates the pandemic due to its large-scale investments in the developing countries, added Dr. Deepak. The Philippines, which locked horns with China over the disputed South China Sea, also imported 5 million doses.

India’s health ministry has announced the presence of a highly transmissible Delta Plus variant in 12 states, raising concerns about a potential third wave. But Dr. Demello suggests the third wave of COVID-19 will be less intense because of the heightened awareness among the people and the government.