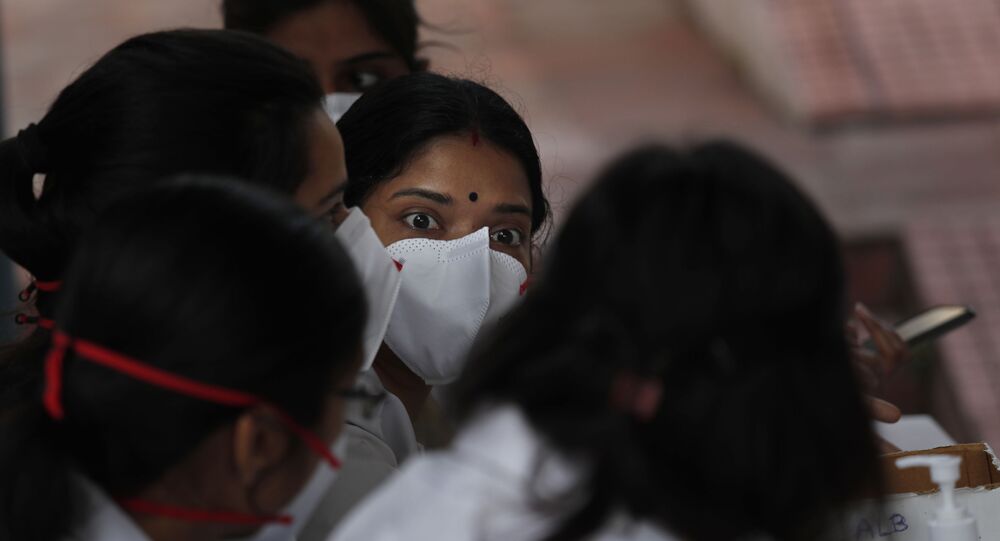 'Are We Fools to Risk Our Lives?': Indian Nurses Walk Out Demanding Revised Pay, Fixed Jobs

Since the novel coronavirus broke out last year, healthcare workers covered head-to-toe in personal protection equipment (PPE) have been at the forefront of the fight against the virus.

Hundreds of nurses walked out of their duties in Madhya Pradesh (MP), India on Wednesday to demonstrate against hospital authorities and the Bharatiya Janata Party (BJP)-led state government.

Talking to Sputnik, protesting nurses from Jabalpur city shared that they want stable jobs for junior staff, proper pension provisions, and compensation for the families of nurses who lost their lives treating COVID patients, among other demands.

“On 6 June, the nurses of many government hospitals and medical colleges from around the state wrote a letter addressed to their authorities. The association of nurses in Madhya Pradesh extended 10 demands. All of our demands to the state government are meant to ensure employment and sustainable salaries for us",  J. Masih, a young nurse from Jabalpur who was protesting with her colleagues, told Sputnik.

"We have given nine straight months to taking care of COVID patients at our respective hospitals. We put others' lives before us. And yet, our efforts have gone unacknowledged by the government”, she added.

Obtained by @SputnikInt : Nurses of #MadhyaPradesh have been urging authorities to upgrade their salaries, settle their pensions, compensate the families of nurses who lost their lives to COVID among other demands. pic.twitter.com/LEoy8bFV2s

​Scenes from the protest sites show the nursing staff of some government hospitals in Madhya Pradesh sitting outside a building. They can be seen raising slogans in support of their demands.

Obtained by @SputnikInt -- Visuals from outside the #JabalpurMedicalCollege where nurses have walked out of their duty wards to protest against uncertain employment status. pic.twitter.com/KZ6507QusU

​“So many of us have been putting in the hard work, risking the well-being of ourselves and our families and yet we have to fight for our basic rights. We have been working despite job uncertainty for over 300 days. But we haven’t been given any letter regarding making our jobs permanent, or putting a proper pension scheme in place for elderly retired nurses", Harsha Solanki, the head of Madhya Pradesh Nurses Association Regd. No. 11,720, told Sputnik.

"The state government has not even released the results of last year’s ‘Vyapam’ exam. At this point we do not even know if we will be allowed to come and work in the hospital tomorrow. The stress and anxiety is real”, Solanki noted.

Obtained by @SputnikInt -- Nurses are not tending to patients in the hospital wards in MP today, as part of their protests against authorities. pic.twitter.com/0hx3KlK8Jn

​Every year, the state hosts the “Vyapam” exam conducted by the Madhya Pradesh Professional Examination Board (MPPEB). Thousands of students take this test as per their field of studies and depending on their scores, they are given jobs.

Furthermore, the rules of the Indian government stipulate that junior medics, including nurses who have worked at government facilities for 89 days, are eligible to continue their duties under two categories.

Either they are offered a permanent position, or they are put in the “Samvida” bracket under which their duties are extended on a yearly basis at lower pay. In both scenarios, the active employment status for junior doctors and nurses emerges as the most important result.

“The state government is releasing regular job vacancies but not giving us permanent employments. Are we fools to be working day and night in PPE kits?" said another protesting nurse from Jabalpur while requesting anonymity. "We want answers. Hospital authorities have not responded to us as of now, but we will wait until they do”, the nurse added.

On Tuesday, around 300 nurses from MP’s Indore city-based MY Hospital went on mass casual leave (CL), demanding a response from the hospital and state authorities to their demands.

The nurses have decided to carry on their strikes and protests until the authorities respond.

Madhya Pradesh: Nurses Association staged demonstration at MY Hospital in #Indore on Monday. About 300 #nurses went on mass Casual Leave as protest. Their main demands are increase in grade pay, implementation of pension scheme, appointment on compassionate grounds pic.twitter.com/FE9ZSXMVo2

​Similar protests by the nursing staff have erupted at government hospitals in Maharashtra state as well. On 24 June, over 6,000 nurses across state-run hospitals went on a two-day strike to protest against poor wages, delayed promotions, long working hours, and huge vacancies in hospitals.

​The trying time of the COVID pandemic has been rough for healthcare professionals, who have had to handle thousands of patients infected with the deadly virus.

On 24 May, the World Health Organisation (WHO) said over 115,000 healthcare professionals had lost their lives around the world due to COVID. The Indian Medical Association (IMA) also revealed on 2 June that over 590 Indian doctors had died during the second COVID wave that escalated between April and May.