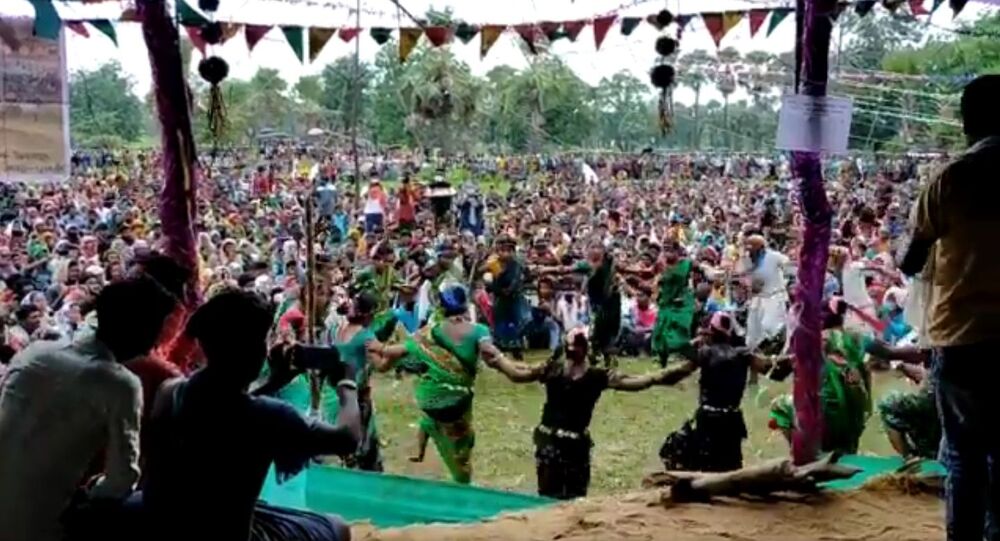 The Chhattisgarh government's bid to beef up security in the region has become a cause of anxiety for the tribal villagers who are constantly caught in between militancy and the military. The villagers fear that the heightened security will suppress their voices.

Tribal villagers in the Bastar district of Chhattisgarh on Monday evening chose a non-violent manner to remember the killing of 17 people by Indian security forces in 2012. Thousands of locals dressed in colourful traditional clothes danced and sang songs to remember the encounter.

A probe report in 2019 stated that the Chhattisgarh police killed 17 persons in a staged gunfight at Sarkeguda on 28 June 2012 and passed it off as the elimination of Maoists. The police claims of firing from the villagers' side were incorrect as the security forces could not provide any proof, the report by Justice Vijay Kumar Agarwal stated.

The security forces claimed they were fired at by Maoists, to which they retaliated. However, the villagers rebutted the claim saying they had gathered that night only to discuss the preparations for a traditional festival, but the forces opened fire at them.

Bastar is seen as an area of violent conflict, but it is also the home of inspiring nonviolent movements. Here people are remembering 17 adivasis killed by the security forces on 28 June 2012 in Sarkeguda. Judicial enquiry pronounced the forces guilty. pic.twitter.com/WQkTpLjWOs

Bastar, Sukma, and Bijapur are some of the worst Maoist (insurgent)-affected districts in Chhattisgarh, where the Maoists take shelter in the thick of forests. So far 79 persons, including security forces, have died in gun battles in the state in 2021.

Thousands of tribal villagers in Bastar have been protesting for more than a month against the establishment of a paramilitary camp in Silger. The agitation swelled on 17 May, when the police allegedly opened fire on villagers, killing three people on the spot. A pregnant woman later succumbed to her injuries.

The villagers have now demanded the immediate withdrawal of the camp and an inquiry into the policemen who opened fire. They claimed that the setting up of camps was never given a green light by a gram sabha (village gathering).

Last year, the Congress government in the state announced that it was setting up eight new security camps in the districts of Dantewada, Bijapur, and Sukma to clamp down on insurgency.

While State Chief Bhupesh Bhagel's government is facing a relentless protest from villagers, the Congress government too faced severe criticism for the handling the killings in 2012. The state police in India are directly under the control of the state chief.