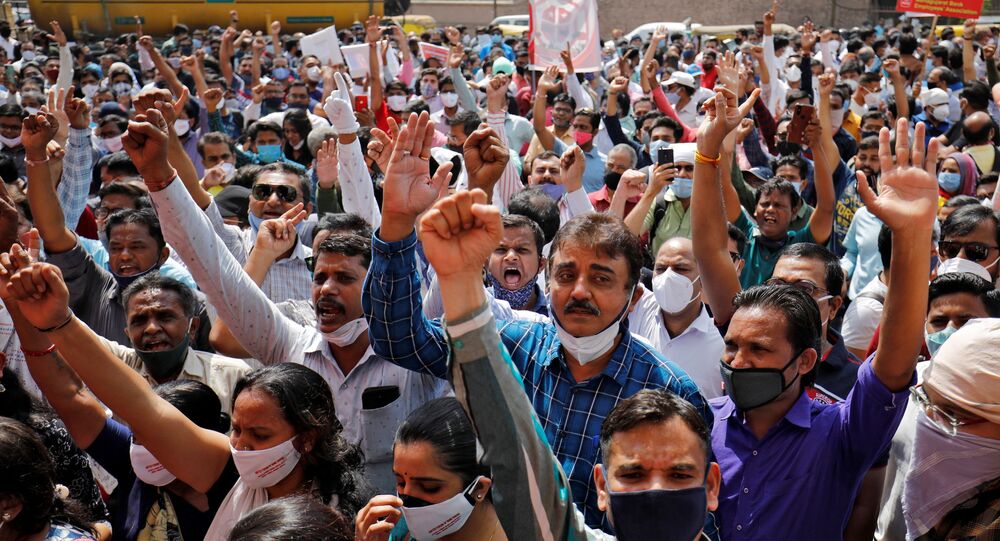 Protests Break Out in Delhi, Jammu and Kashmir After Abduction, Alleged Conversion of Sikh Women

According to local media reports, more than 70 Sikh girls between 2009 and 2019, were forcibly converted to Islam in Jammu and Kashmir. The families of the girls are still waiting for them to return. So far, this year, four cases of anti-conversion have been reported.

A massive protest erupted outside Jammu and Kashmir House in the diplomatic sector of New Delhi, on Monday after it was alleged that two Sikh women were abducted and forcibly converted to Islam in India's Jammu and Kashmir.

Just in : Sikh groups protesting in Delhi against the recent conversion row in J&K.#Delhi #sikhgirl pic.twitter.com/4xKny21bvw

Before the memorandum was presented to the prime minister, many Sikh organisations staged a protest in front of J&K House on Prithviraj Road in Delhi. pic.twitter.com/yFAeHNakyo

​According to reports, a Sikh woman from Budgam district in Jammu and Kashmir was kidnapped and forced at gunpoint to convert to Islam. According to the Union Territory Police, the woman has been handed over to her family and the accused 29-year-old man (whose name was not revealed by the police), has been arrested.

The second case of another 18-year old mentally unstable girl, Manmeet Kaur, from Srinagar - Jammu and Kashmir's summer capital - was abducted on 21 June by a 62-year-old man.

Second girl belonging to Mehjoor Nagar of Srinagar attended a function of her Muslim friend. She was later found married to a boy who was attending the function. This girl is not a minor but is missing. The protests have intensified due to the two cases that have shocked valley

On Sunday, the Sikh community leaders from Delhi and Indian state Punjab protested in Srinagar.

I am at Srinagar joining the protest with local Sikh community against forced Nikah and conversions of Sikh daughters who are forced to marry elderly of different religion
I urge Govt of India to take stern action against such kind of Nikah happening in the valley@ANi @HMOIndia pic.twitter.com/BLu3QBT9ir

The local Sikh community of Jammu and Kashmir urges @AmitShah Ji to get a strong law implemented in Jammu & Kashmir (Just like Uttar Pradesh & Madhya Pradesh) mandating Permission of parents in inter-religion marriages to stop these forced Nikahs of Sikh minority girls@ANI pic.twitter.com/Tk6suVnYyu

Not #Lahore in #Pakistan.#Kashmir in #India.#Sikhs on the streets of #Srinagar: Protesting against alleged abduction & forced conversion at gunpoint.
Sikh leaders demand anti conversion law like @myogiadityanath Govt brought in Uttar Pradesh even in the Union Territory of J&K. pic.twitter.com/X2zudW3ev2

Omar Abdullah, a former state chief of Jammu and Kashmir, said necessary punishment should be given to the culprits.

I hope the authorities will move quickly to investigate the recent cause of tension & if anyone has broken the law the case should be prosecuted & necessary punishment handed out.

Sirsa met Jammu and Kashmir Lieutenant-Governor Manoj Sinha on Sunday. The Lieutenant-Governor gave the assurance that Sikh demands for a Minority Commission would be made a priority in his next meeting with the federal government in Delhi. The delegation of Sikhs also demanded an anti-conversion law to protect Sikhs girls in Kashmir.

Deeply anguished over the alleged #abduction & forceful #Conversion of #Sikh girls in #JammuAndKashmir.I have requested @narendramodi ji @PMOIndia today for implementation of #Anticonversionbill in the valley along with special status for minorities including #Sikhs living there pic.twitter.com/t77nwJWj93