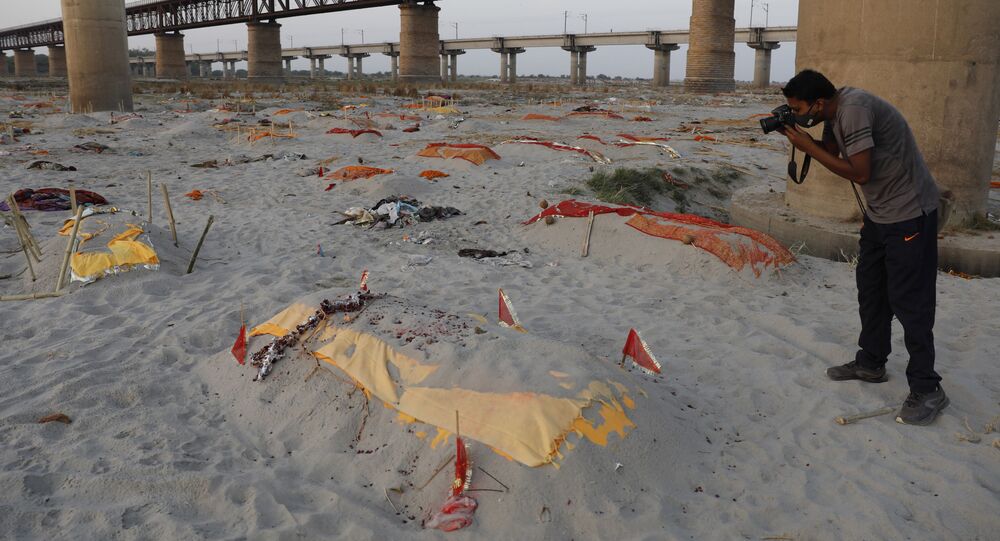 The second wave of COVID that lashed India brutally between the April and May months of this year, resulted in the deaths of over 100,000 Indians, government figures reveal. Hundreds of deaths each day have led some cities, including Delhi, to run out of burial and cremation grounds. People have begun to dispose of unidentified corpses in rivers.

Owing to the heavy rains that are lashing parts of Uttar Pradesh (UP) state, the water levels of the Ganges River has started to rise. As the sand banks of the Ganges crumble and give way to water pressure, newer batch of dead bodies are beginning to float up.

Video clips from the regions show mass graves around the Ganges in Prayagraj city, revealing the horrors of indignity in cremating dead bodies of suspected COVID patients. In detailed graphic videos, dogs can be seen nibbling on the disposed corpses.

​​Niraj Kumar Singh, a zonal officer for the Prayagraj Municipal Corporation, confirmed to the Indian media on 24 June that he had cremated 40 bodies recovered from around the Ganges in the last 24 hours.

© AP Photo / Rajesh Kumar Singh
After Mass Grave Exposed Along Ganges River, Indian Police Burn Dead Bodies With Tyres and Petrol
Between April and May, hundreds of bodies of suspected COVID-19 victims were found floating in the Ganges or buried in the sand in the states of Uttar Pradesh (UP), Madhya Pradesh (MP), and Bihar.

At the time, the authorities of some states including UP had said cremating bodies near the Ganges was a Hindu ritual.

Since such incidents have continued to be reported, last month the UP government called in the State Disaster Response Force (SDRF) and personnel from the Provincial Armed Constabulary to patrol near all rivers in the state.

UP state chief Yogi Adityanath had also conceded last month that people have been burying the dead in shallow sandy graves along the riverbank in the state since the cremation grounds were overcrowded.