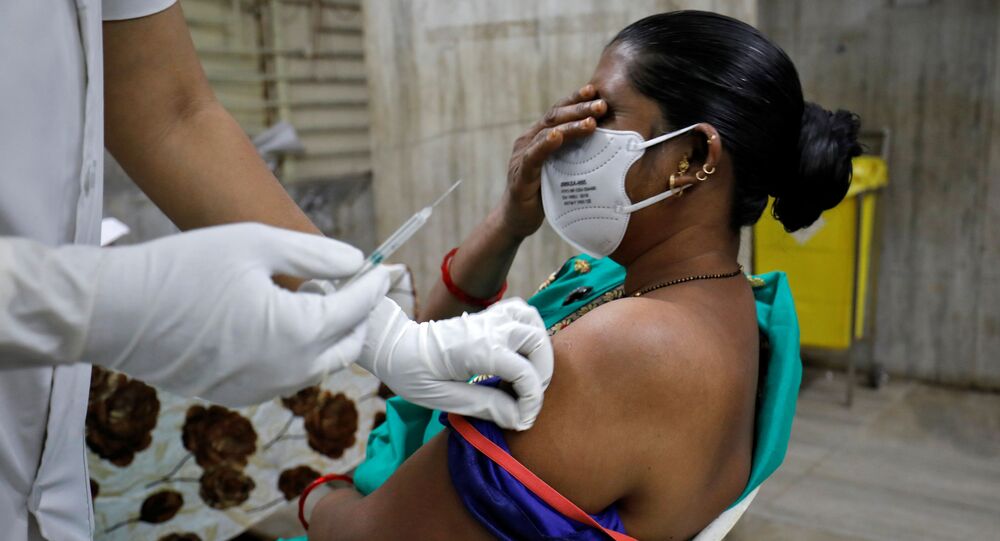 India has recorded 391,981 COVID-19 deaths since the onset of the pandemic last year. After being hit by the deadly second wave, the Narendra Modi government revised the vaccination policy, aiming to inoculate the entire population by the end of 2021.

West Bengal state chief Mamata Banerjee announced a series of measures to stop children from getting infected in the anticipated 'third wave' of coronavirus. Among the measures, the government declared that the state administration prioritise the vaccination of mothers with children aged up to 12 to curb the spread of the virus among kids.

During the second wave of the COVID-19 in India, more children were affected by the virus compared to the first year of the pandemic. In West Bengal, at least 21,000 children tested positive between February and May this year.

"The decision was taken because mothers are primary caregivers to the children and vaccinating them will stop the transmission process," a state health official told Sputnik.

Earlier this month, the state of Andhra Pradesh too announced priority inoculation for mothers with children up to age 5. However, there is little evidence suggesting that such a step would actually help children fight the mutating virus.

"Everyone should get vaccinated, but there is no scientific approach to the measure. A new study now shows that lactating mothers can safely take the vaccine. However, there are concerns about huge crowds at vaccination centres becoming a hotspot and infecting mothers. There is no concrete argument to suggest that children are especially vulnerable in the third wave. There is perhaps apprehension with the reopening of physical schools and a lack of vaccines," Dr Oommen John, Fellow at the George Institute for Global Health India told Sputnik.

There's no evidence to prove that children will be affected in the #Covid third wave. According to the second wave data, Out of all the kids admitted in hospitals, 60-70% had co-morbidities or low immunity: @MoHFW_INDIA #Unite2FightCorona pic.twitter.com/pVkstNCH9L

A study published in the medical journal 'Vaccines' shows a strong secretion of SARS-CoV-2-specific IgA and IgG antibodies has been detected in breast milk for six weeks after vaccination. This means the antibodies pass through the breast milk of a vaccinated mother, which is likely to provide some protection to babies; the study claims.

The clamour over the 'third wave' of infection increased in India after  All India Institute of Medical Science (AIIMS) chief Dr Randeep Guleria in an interview said that the bout will arrive in 6-8 weeks. India recently discovered 40 cases of infection caused by another mutation of the virus named Delta Plus or B.1.617.2.1. Virologists have expressed their concern over this new variant's high transmission rate. The Delta variant, which is said to be the reason behind India's deadly 'second wave' has now spread to 75 countries.

"Since the virus has a high mutation rate, the government should caution citizens of reinfections instead of painting a rosy picture of high recovery rate. The (central government) should also check for the states where surveillance systems are picking up activities. States like Maharashtra, Karnataka, and Kerala reported a high number of cases last year and have started, picking up activity. This should be a cause of concern because similar infection patterns will be recorded in other states. Once the lockdown gets lifted for economic reasons and people start mingling without universal COVID measures, the transmission rate will increase," Dr John said.

The only way to stop the transmission is through avoiding crowds and super spreading events where one person in a closed room with 20 others can potentially infect everyone, he added.

According to official data, as of 20 June India had administered at least 300 million vaccine doses. That is less than a quarter of India's population which is almost 1.4 billion, and only 5 percent of adult Indians have received both jabs so far. West Bengal has so far administer over 2 million doses.