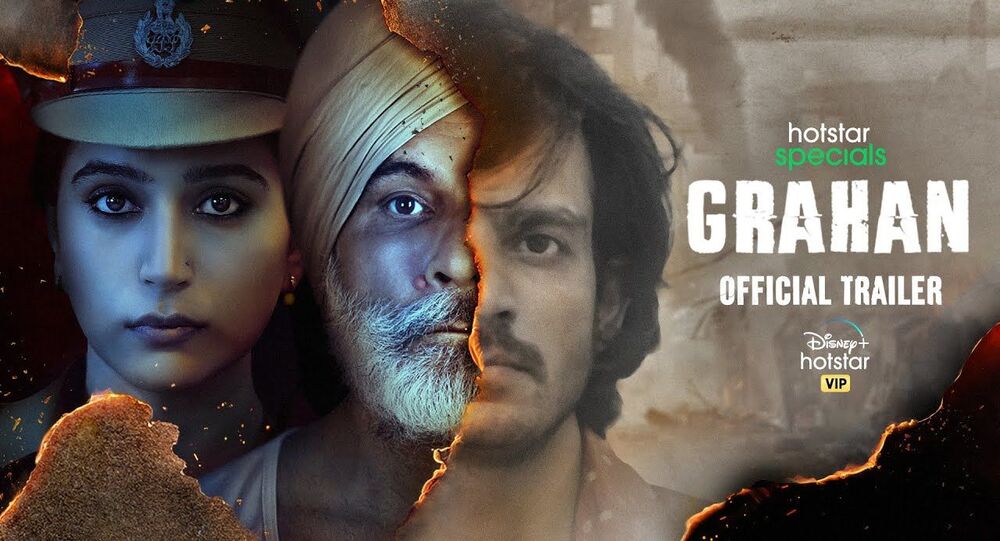 Inspired by Satya Vyas's book "Chaurasi," the web series stars actors Pavan Malhotra and Zoya Hussain in the lead roles. It's scheduled to release on Thursday on the Disney+Hotstar OTT platform.

Indian social media users are posting the #BanGrahanWebSeries hashtag and calling for a ban on the release of the upcoming web series "Grahan," which is based on the 1984 anti-Sikh riots in the country.

The makers of the series have been accused of portraying a Sikh character in an "objectionable manner."

The controversy erupted on Monday when Bibi Jagir Kaur, president of the Shiromani Gurdwara Parbandhak Committee (SGPC), which manages Sikh shrines, filed a complaint to the Ministry of Information and Broadcasting demanding the series be banned.

"A Sikh character has been portrayed in an objectionable manner in a web series called Grahan based on the 1984 Sikh genocide. In the web series, the charge of Sikh genocide is being levelled against a Sikh character which is highly condemnable and fabricated," Kaur told Indian media during a press conference on Monday.

“The threats to repeat the 1984 genocide of Sikhs on social media platforms are common which spoil the atmosphere and has created a lot of resentment in the minds of Sikhs. But no action was ever taken against those who spread hatred against the Sikhs,” she said.

Kaur said that a legal notice has been sent by Nirpreet Kaur who witnessed the massacre to the producer of Grahan, Ajay G Rai, and head and president of Disney+Hotstar Sunil Ryan.

#Grahan Webseries hurts Sikhs with its insensitivity & seems to be an attempt to protect influential people
We wont allow Grahan to be released. We wl take legal action in case @DisneyPlusHS went ahead with its release@SGPCAmritsar @republic @punjabkesari @IndiaTVHindi @ANI https://t.co/uwhmK7s88d pic.twitter.com/f3Dn2XABbn

If it is controversial web series and disrespects feelings of people or remember old worst incidents happened with them then this series must be banned as early as possible.@DisneyPlusHS @HMOIndia #BanGrahanWebSeries #Grahan pic.twitter.com/t8bVDXzL6K

Explaining why she believes Grahan should be banned, Kaur claimed that "some people just want to hurt" the Sikh community.

“Such films also hurt the communal harmony in society. Therefore, the government should enact strict Information Technology (IT) rules to curb such sensitive and objectionable trends," she added.