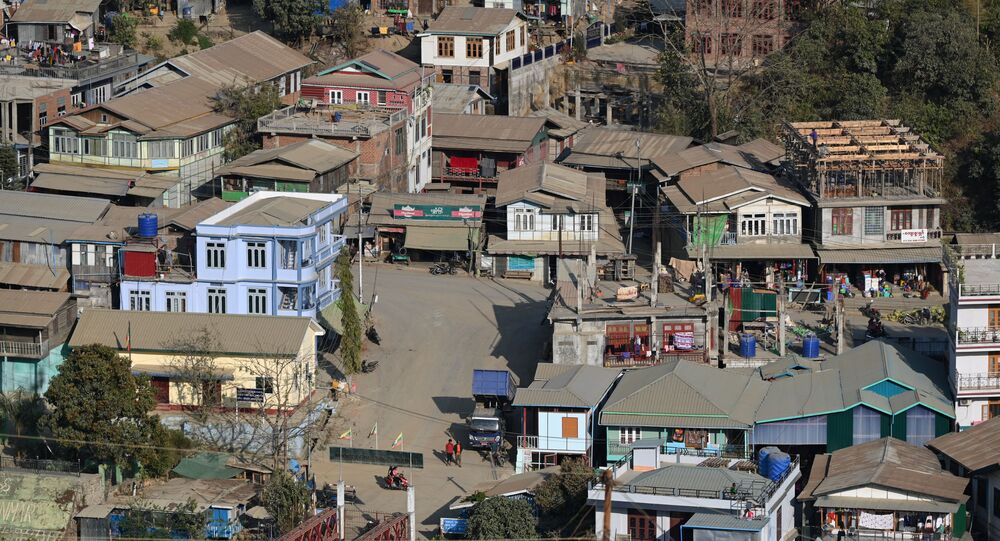 Mizoram state in India is located in the far North-East and shares international borders with two countries including strife-torn Myanmar. The hilly state is among those in the country which have not yet implemented the federal government's policy of encouraging couples to limiting themselves to having no more than two-children.

Robert Romawia Royte, Minister of Information Technology, Sports, Youth Affairs and Tourism in India's Mizoram state announced an award of $1,348 to the couple which had the most children in his constituency. The award, announced on Father's Day on 20 June, highlights the problem the state is facing because of its low population. Generally in India, the increasing population is a cause for concern and driving state governments to bring in measures for discouraging people from having more than two children.

Sputnik News : What has prompted you to announce the award for the couple with the most children?

Robert Romawia Royte: Mizoram has a very low population density - 52 people per square kilometre as opposed to the national average of 382 people per square kilometre. If you take statistics from Kerala or Uttar Pradesh, the population density is very high. However, in our state we have the problems you associate with a sparse and scattered population. We need to develop roads and infrastructure for settlements where there are not many people.

Sputnik News: How has your idea of awarding the couple with the most children been received?

Robert Romawia Royte: This idea of awarding the couple with the biggest number of children in my constituency is my personal notion and nothing to do with state government. It is supported by an estate consultancy firm which will arrange the prize money and other logistics. The response is very good. All the leading churches in Mizoram have decided to encourage more child births. Mizoram being a 100 percent Christian state, what the Church resolves, the people of Mizoram resolve. Other umbrella associations such as the Young Mizo Association have also decided to campaign for more children. It is a unanimous opinion - we want every parent to have more children.

Sputnik News: You announced the award two days ago, has anyone claimed it yet?

Robert Romawia Royte: Officially, no. But unofficially I am getting a lot of messages from parents claiming to have nine or 10 children. One couple sent a picture with 11 children. We are still going through the verifications and the award will be given within this month. We announced the award on Father's day - it was a signal of sorts for fathers to have more children. Come Mother's Day and we might announce more awards.

Sputnik News : What are your views on the federal government's two children limit that is being advocated in other states?

Robert Romawia Royte: I appreciate the federal government's initiative of encouraging two-child limit but in view of the density of population in Mizoram state or Arunachal Pradesh (which is the least populated state in India), a limit of two children per family might not be right for the north-eastern states. Geographically, demographically, economically and also for national security, this does not augur well for us. Mizoram shares 70 percent of its border with other countries - Myanmar and Bangladesh. There are  large swathes of the land that are uninhabited and raise security concerns as well. The two-child limit might be good for states such as Kerala but not states with a declining population, such as Mizoram.

Sputnik News: How do you view the population status of India ?

Robert Romawia Royte: In view of the fact that population is an asset not a liability, personally I feel that we need to make the best use of our most valuable asset - which is our population. And the greater the population, the greater the benefits for states such as Mizoram. To make Mizoram's population density on a par with the national average we need to have more children. In India there is a huge unimaginable diversity, we have huge variations. In view of the diversified nature of states, the two-child limit may not work. The federal government should think of states struggling with problems which arise when you have a sparse population.

Instead of thinking that population is a liability we have to think otherwise. We have to see how we can make use of our big population as an asset. We have to have a policy for maximum utilisation of our population to boost production, growth. The issue is optimal utilisation of the potential of our population and their services. Look at countries such as Iceland, Finland and other European countries which have suffered severe setbacks because of having small populations. When a huge population becomes developed and grows, the impact on the country is phenomenal. India should see how to make use of its big population to ensure faster growth economically and socially.

Sputnik News : Mizoram shares its border with Myanmar which is going through massive political strife and upheaval. How is the state government dealing with the crisis in its backyard?

Robert Romawia Royte: It is a big concern for the state of Mizoram because ethnically, people in Myanmar are related to Mizos. The state chief has clearly announced in the assembly session that on humanitarian grounds, the government of Mizoram cannot sit idly by when brothers and sisters are struggling for their life. We will do all that is necessary for their safety and food. People of Mizoram are with those in Myanmar - every Mizo in Mizoram has a commitment that as long as they are eating, our brothers and sisters crossing over from Myanmar should also eat.