While Prime Minister Narendra Modi’s government has described its decision to scrap the semi-autonomous status of Jammu and Kashmir as one of its biggest achievements, the move has drawn criticism from Kashmiri organisations, as well as Pakistan and China. India says any decision on Jammu and Kashmir is its “internal matter”.

Political organisations in Jammu and Kashmir have called for a "united fight" to restore the region's "special status" that it had before Prime Minister Narendra Modi's government scrapped Article 370 in a landmark decision on 5 August 2019.

She was addressing a press conference after a meeting of the People’s Alliance of Gupkar Declaration (PAGD), a coalition of regional Kashmiri political parties formed in October 2020. The main demand of the PAGD is the restoration of the political status quo in Jammu and Kashmir to what it was on 4 August 2019.

“We are not against dialogue. But there must be some confidence-building measures (CBMs) extended by the federal government”, added Mufti, flanked by other PAGD leaders.

She also said that all Kashmiri political prisoners across India must be released before a formal dialogue process takes place.

“If they are really serious about reaching out to the people of Jammu and Kashmir, this is the least they could do. They have humiliated us for the past two years”, Mufti stated.

During the presser, Mufti also confirmed her attendance at an upcoming meeting with Modi, slated to take place on 24 June - marking a U-turn, as she had earlier vowed not to meet the prime minister until the Indian government restores the autonomous status of Jammu and Kashmir.

Last week, India’s federal Home Ministry extended an invitation to Kashmir’s political outfits, the first time that the aggrieved political parties will be able to convey their concerns to the prime minister in person.

In a landmark decision on 5 August 2019, Prime Minister Modi’s government scrapped Articles 370 and 35A of the Indian Constitution. Article 370 afforded a semi-autonomous status to Jammu and Kashmir. The administration of parts of the Kashmir region is disputed between India and Pakistan.

New Delhi also bifurcated the erstwhile Jammu and Kashmir state into two federally administered union territories — Jammu and Kashmir (bordering Pakistan) and Leh (bordering China). India’s moves have been condemned by both Pakistan and China, which have conflicting territorial claims in the region. In fact, Pakistan's Prime Minister Imran Khan has refused to speak to the Indian leadership on any matter until it reverses its decision on the region. 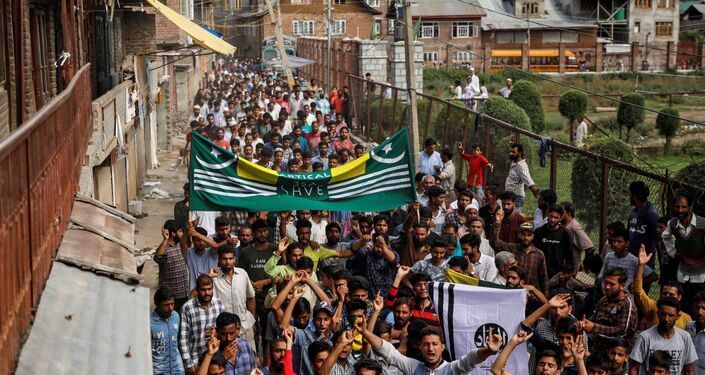 © REUTERS / DANISH SIDDIQUI
Kashmiri men shout slogans during a protest after the scrapping of the special constitutional status for Kashmir by the Indian government, in Srinagar, August 11, 2019

In order to prevent domestic protests over the central government's 2019 decision, the Indian federal authorities detained major political leaders, in addition to ordering the suspension of Internet services.

Among those taken into custody were Mufti and another former state chief, Dr Farooq Abdullah, who heads the PAGD.

“Everyone knows our stand and we don’t have to repeat it. We will discuss that with the prime minister”, Abdullah, who is also a former federal minister in a past Congress-led government, stated at the presser.

“If their proposal [is] in the interest of [the] people of Jammu and Kashmir and Ladakh, we will agree to what they propose. We will say no otherwise”, he added.

According to media reports citing official sources, Prime Minister Modi’s government has agreed in principal to reorganise Jammu and Kashmir as a state, but without the special status it had before August 2019.

The Modi government is also not believed to be in favour of reversing its 2019 decision, as demanded by the Kashmiri leaders.