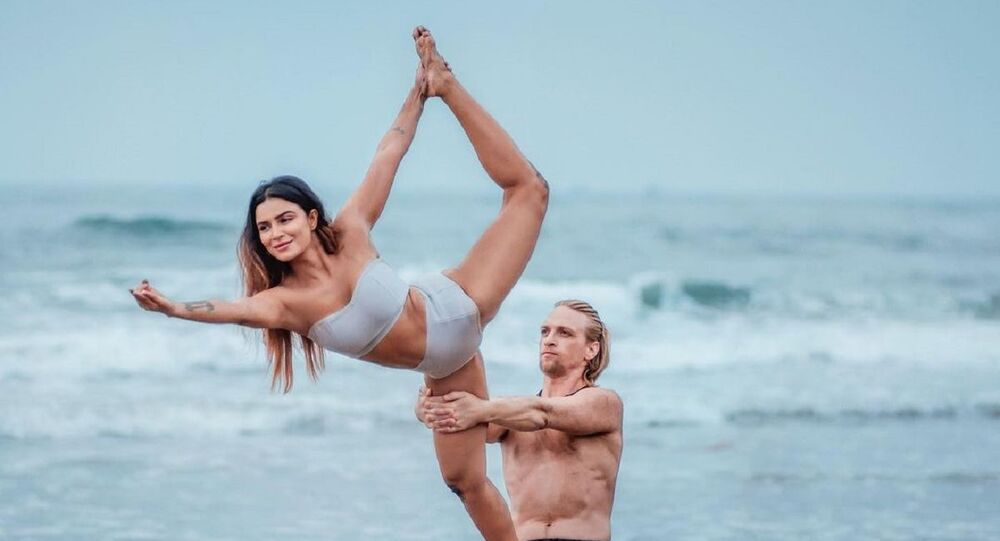 Mixing yoga with acrobatics, ‘acro-yoga’ has been something of a craze for the past few years. It is a popular form of workout that brings partners together as they lift and balance their other half to create acrobatic formations. It also draws on the traditions of circus arts, cheer-leading, and dance.

From lifting each other to balancing and creating acrobatic poses, the power-couple actress Aashka Goradia and Indian-American yoga expert Brent Goble practise their acro-yoga with considerable flair and have been an inspiration to a plethora of couples.

On International Yoga Day, Aashka and Brent tell how acro-yoga has become a new craze, how they got hooked on it, and how it has transformed their life completely.

Sputnik: How did acro-yoga strengthen your relationship with Brent?

Aashka: Brent and I didn’t plan to do yoga to master a fitness form or get more likes on Instagram.

We do yoga to get to know one another better, have fun and celebrate our togetherness. Mastery becomes a way to do it when you fully enjoy what you are doing. We love anything and everything we do together.

Sputnik: How difficult was it to do acro-yoga?

Brent: With acro-yoga you have to approach each challenge with a sense of fun and exploration. If you’re too caught up in the intricacies, then you’re not in sync with each other, and mishaps can happen. While doing acro-yoga, I work as a base for Aashka to make a shape. As a base, I have to keep aware of how she’s breathing.

The quality of her breath will determine the expression of a position we are attempting. The same carries through to our relationship.

Sputnik: What made you realise that yoga is your calling?

Brent: I’ve been practising yoga for 22 years. Living in New York City, yoga was an excellent way for me to keep my health up between stage performances. As the pressures of living in New York began to rise, I noticed the deeper effects of yoga affecting my life. I knew yoga would become an integral part of the rest of my life.

Aashka: I could respect yoga in its full form once Brent got it in my life in the way no one else did. He wanted to teach me and I wanted to learn. There is no greater joy than being able to learn something that your heart has desired for a long time - in my case, it is the path of being well and serving well.

Sputnik: How did yoga transform your life?

Aashka Goradia: Things matter to me now in a whole new way. There is a whole new perspective towards life. My goal is to experience all dimensions of the human body and energy, instead of mastering yoga.

Brent: Yoga has given me the clarity and resilience that nothing else could. It encouraged me to change myself physically and mentally which led to a more mature understanding of life’s deeper meanings.

Sputnik: What was the most challenging thing about practising yoga?

Brent: I tend to forget to approach my own practice with integrity and honesty. I teach the yoga lifestyle but I can forget just how the tenets apply to my life. As teachers, we need to remember we are also students and will always be.

Sputnik: Celebrities often get trolled or body-shamed on social media for flaunting their body in a bikini. Did you also get trolled for doing yoga in a bikini?

Aashka: I feel I’m one of those blessed people who doesn’t get trolled. I love the community that has been built on my social media. Both men and women see my posts as a way of being better, being who you are.

I don’t just put bikini pictures to be sexy, but to celebrate the human body and things it can do. Sexy is a part of perception and not action alone.

Sputnik: Why do so many people fall off with yoga practice?

Brent: Yoga takes time to root itself in one’s life. Sometimes people take up the practice because they’re curious. Some want to try a new impressive pose. Some want to take better care of their life. All those reasons are valid. But in order for yoga to work properly, one must stay dedicated and committed to it.

Sputnik: What is it like to make a lucrative career out of yoga which used hardly to be considered a full-fledged profession?

Brent: In any profession, and especially yoga, it’s challenging to make your skills marketable at first. Just because you have a certification doesn’t necessarily mean you’re “ready” to teach. It takes time to mature into this path. And even more time to attract a dedicated following. Yoga isn’t a profession one should go into with the intention of making money. It’s about health and wellbeing and thus sharing the teachings to better the life of those around you.

Sputnik: How are you planning to take yoga to the next level?

Brent: As I’m rounding out the first 1000 hours of teaching, I plan to register Peace of Blue Yoga (POBY) - my centre in Goa state - as a school that will allow me to help students become teachers themselves and assist existing teachers to meet their continuing education requirements.