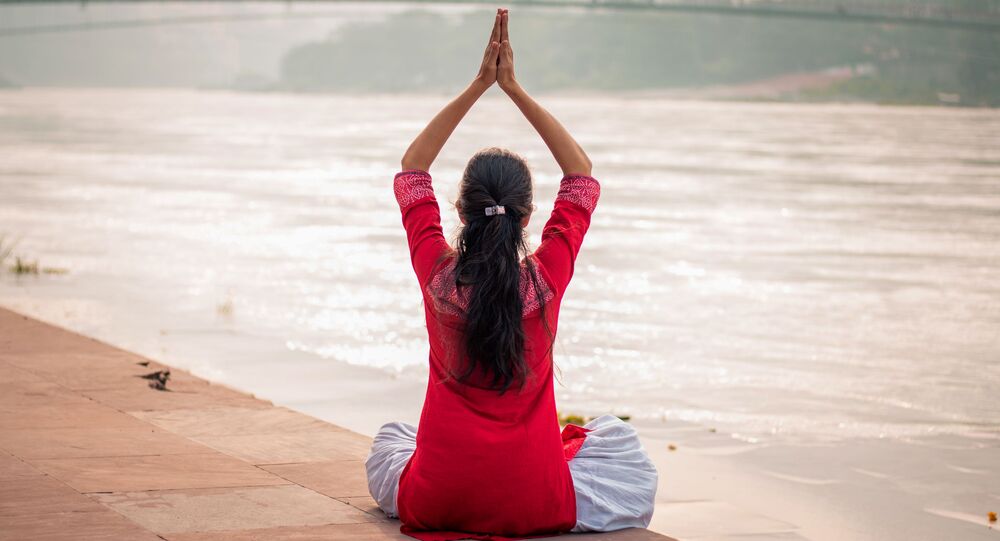 Tracing its roots back to somewhere around 1,500 BC, some of the oldest written records in India mention the practice of “dhayana”, a quieting of the voice of the mind. In modern terms, this practice is called meditation. Between the second and sixth centuries, Indian sages began exploring meditation more deeply, leading to the birth of yoga.

In the northwest part of India lies the town of Rishikesh, by the banks of the holy Ganges river. Per Hindu scripture, the art of 'yog' came into being over 5,000 years ago in that region. Existing on the foothills of the perpetually snow-capped Himalayan mountains, Rishikesh is a heritage of hermits, the abode of sages, and is internationally considered the yoga capital of the world.

There are said to be officially 12 forms of yoga, based on combinations of varied kinds of breathing, meditation and physical formations, all of which require intense concentration, will power and commitment to perform, according to yoga orthodoxy. The original teachings of the 12 forms have been well preserved throughout thousands of years in Rishikesh, and are still carefully taught in the town by masters of the art.

Sputnik
Yoga work-out in Rishikesh, by the Ganges, Surrounded by the Himalayas

​Each year, the town hosts two of world’s biggest yoga celebrations, in March and in June, witnessing the participation of thousands of teachers, spiritual leaders and yoga enthusiasts from all over the world.

This year, due to the COVID pandemic lockdowns, the Rishikesh celebrations of International Yoga Day on 21 June are using virtual tech to reach millions of practioners around the world. Normally this day would see tens of thousands of tourists from India and around the world flocking to the purported birth city of yoga to engage in the spiritual exercise of deepening their practice under the guidance of teachers who are referred to as 'Maharishis'.

The celebrations begin with prayer, followed by the ritualistic 'Surya Namaskar', a yogic offering to the sun. Throughout the day, practitioners meditate, savor wholesome vegetarian cuisine and, in the evening, festivities marking the event culminate on the banks of the Ganges by offering a final prayer to the river and to the moon.

Obtained by @SputnikInt - breathing, stability and meditation makes for the key elements of Yoga. pic.twitter.com/G8mJPgGbPC

​This year, the annual yoga event is being organized virtually, featuring several leaders who will be speaking to and training registered audiences online.

Locals from the town believe that the overwhelming calm and peaceful energy that makes for the extraordinary essence of Rishikesh is - physically or virtually - what draws practitioners of the spiritual art to the city.

What is Yoga and What is the Sensational Incident That Put Rishikesh on the World Map as Its Hub?

The union of mental, physical and spiritual practice is summed up in the Sanskrit-Hindi word “yoga”.

Between the second and fourth centuries, Sage Patanjali, considered the father of yoga, wrote the first records of the practice in a scripture that is named after him. The book, called 'Patanjali', written during the second century BCE, is considered the earliest written reference to the practice, according to a Rishikesh-based yoga master, Abhishek Negi, speaking to Sputnik.

The holistic practice of yoga is bifurcated into three parts. 'Pranayama', for controlled inhalation and exhalation, 'Aasana', the stability of the body, and 'Dhayana', meditation. Practicing yoga is, in its most essential definition, the alignment of one’s body, mind and spirit as a means to approach and experience divinity while alive.

“The mention of yoga is found in the ancient Indian texts of Vedas, Puranas, and Upanishads. The stories around yoga mentioned in these scriptures suggest that the art came into existence at Rishikesh itself as a method of ‘healing’. Seers and sages had began secretly experimenting with yoga in the hilly, lush green terrains of Rishikesh thousands of years ago. Slowly as time progressed, the practice began spreading among more people who took shelter under the wings of Indian gurus to learn the techniques, After the British colonizers arrived in India in 1858, the art of yoga, that had been a secret all those years, started to get international attention, ” said Negi, a yoga instructor at the Triyogshala Retreat in Rishikesh.

In 1968, the famous Western pop band, The Beatles, traveled en masse to Rishikesh to learn yoga and Transcendental Meditation (TM), in the ashram of Maharishi Mahesh Yogi. During their roughly three-month stay, the iconic musical group resided at an ashram by the Ganges called 'Chaurasi Kutia' and wrote at least 30 legendary songs, according to John Lennon, one of the band members, in an interview from that same year, including 'Blackbird' and 'Ob-La-Di, Ob-La-Da' and more from the band’s famous 'White Album'.

​The band's visit to Rishikesh and interest in meditation received widespread global media attention. The members left the so-called yogic city following allegations of inappropriate behaviour on the part of their guru (teacher), the Maharishi Mahesh Yogi.

​“The coming of The Beatles to Rishikesh put the otherwise quiet little town tucked in the Himalayas on the world map. More people from around the world came to know about Rishikesh city in India as 'Yog Nagri' or 'Tapovan' – both of which translates to the 'land of yoga and meditation'. The Beatles' ashram is one of the most famous places in Rishikesh for yoga and meditation enthusiasts,” Negi added.

How is the Experience of Practicing Yoga at its Birthplace and World Capital?

There are two sides to Rishikesh city, divided by the Ganges flowing between. One side of the town is the inhabited, market area with houses, shops, dispensaries and cafes.

Sputnik/Agni Yoga Ashram
Yoga Exercises By the Ganges in Rishikesh

The other side is largely silent, and birds are always chirping in the background. This side is the turf of the Yogis. This is where the leaves on the trees can be heard rustling against each other in the breeze that comes down from the high Himalaya. People sitting in meditation in random nooks and corners of this natural side of Rishikesh is a common sight.

​Apart from aesthetically pleasing ashrams and retreats, Yogis submerged in deep meditation can be spotted at serene local spots around the city.

In the backdrop of the mountains, forests, river and Sanskrit chants emerging from exotic temples and echoing around, the Neem Beach, Sai Ghaat, Shatrughan Ghat and Swarg Ashram Beach are some of the most favored places for travelers to sit in ease and trip on yoga, locals from Rishikesh told Sputnik.

“I have had the opportunity to work in the field of yoga, right here in Rishikesh, with thousands of people every year. On multiple occasions, visitors especially from abroad have told me – ‘once you live in Rishikesh, Rishikesh lives in you forever,” said Lavish Narang, native-born and raised in the city, now running a yoga ashram.

The generous and welcoming residents of Rishikesh have kept their doors open to tourists and travelers reaching their 'holy land' who have the desire to explore themselves from within.

“At a time, globalization is at its peak – India is existing in many eras in the same time. While millennials are ushering India forward into the digital world, the elders are preserving the roots of our origination with our traditions and ancient practices. The International Yoga Federation had recently said that over 300 million people from around the globe are now learning yoga – a number which is bound to grow in coming years. We at Rishikesh eagerly await every person who wishes to explore the art of yoga and meditation. From what I’ve seen and heard people talk over the years, it will be an experience they shall never forget,” Narang added.