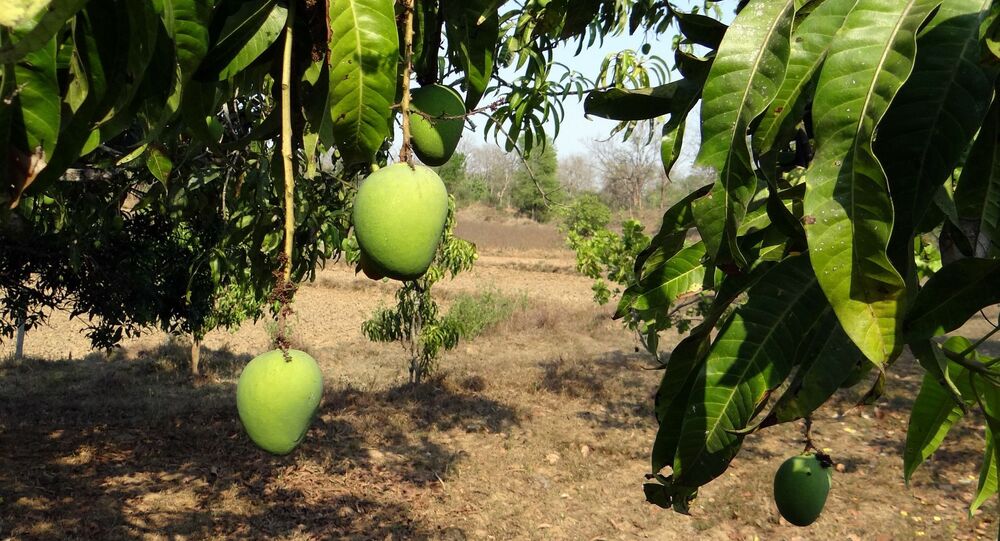 Miyazaki mangoes got their name from the town of Miyazaki in Japan where the production of this variety began about 50 years ago. The city's warm weather, which sees abundant rain and long hours of sunlight, enabled the farmers to grow these fruit. The mangoes, which are often used as expensive gifts, are flaming red and egg-shaped.

When orchard owner Sankalp Parihar, from India's Jabalpur city in Madhya Pradesh state, bought two mango saplings from a man while travelling by train, little did he know that he would be hiring guards and dogs to protect the trees.

The two trees bore unusual ruby-coloured mangoes last year that Sankalp had never seen before. He decided to give them a name of his own - "Damini". But curiosity about its true name and Internet research threw up a startling fact. It was a Miyazaki mango, a Japanese variety believed to be the most expensive mangoes in the world.

Miyazaki mangoes are apparently world's costliest mangoes. Last year they were sold at ₹2.70 lakh per kg in the international market.
A couple in Madhya Pradesh has deployed 4 guards and 6 dogs to prevent the theft of two mango trees. pic.twitter.com/wqt3OnmYfJ

The news of "rare" fruit growing in Sankalp's orchard spread, and last year thieves stole mangoes, attempting even to take away the trees. But the trees were saved and this year Sankalp and his wife Rani have hired four guards and six dogs to protect the precious mangoes.

"The man who sold me these saplings asked me to take care of the plants like our babies. We had no inkling what variety of mangoes it would produce", Sankalp told media persons visiting his orchard.

Rani said that mango cultivators and fruit lovers have been contacting them offering to pay any price for a tree or a fruit.

Intrigued by the rare mangoes growing in their state, the Madhya Pradesh Horticulture Department carried out an inspection of the mango plants and confirmed that they were indeed rare in India. Jabalpur-based Jawaharlal Nehru Agriculture University scientists are now planning to study the fruit.

MH370: How a Cargo of Fruit and Batteries Could Have Downed the Doomed Plane