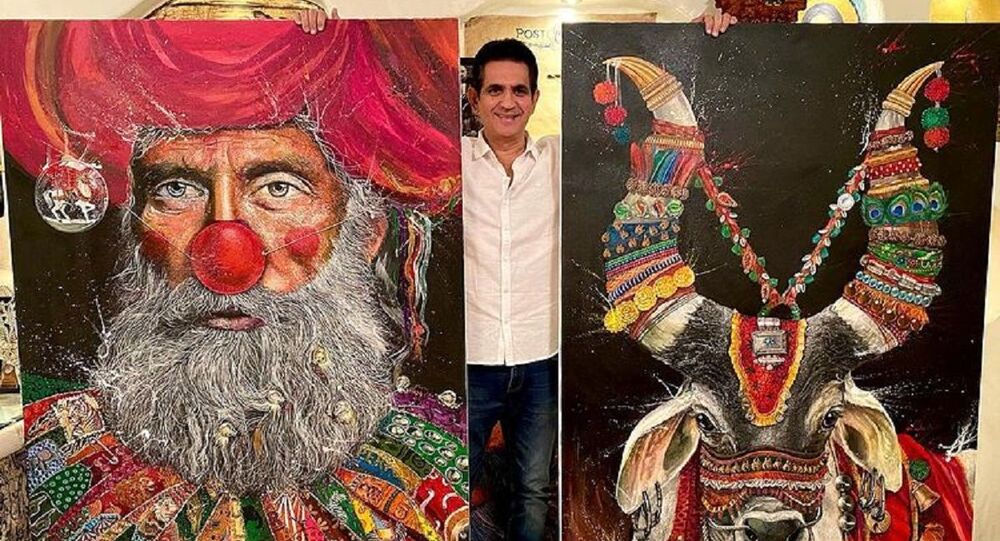 From Artist to Actor, Set Designer & Director, Omung Kumar Shares How He Made it Big in Bollywood

Bollywood filmmaker Omung Kumar shot to fame with his biopic on six-time World Boxing Champion "Mary Kom" (2014) starring Priyanka Chopra Jonas. He also tasted success with the flick "Sarbjit" (2016) based on an Indian national convicted of espionage by a Pakistani court.

As the COVID-19 pandemic paused film shoots due to lockdowns, Bollywood filmmaker Omung Kumar rediscovered his passion for painting to support a noble cause. He auctioned off his artwork to raise funds to feed stray animals left to fend for themselves in these tough times.

Calling himself a jack of all trades, Omung shares with Sputnik how his pursuit of art made him try different creative fields, be it painting, acting, set designing, or filmmaking.

Sputnik: It appears that the COVID-19 pandemic turned out to be good for you as you returned to painting. What motivates you to do this?

Omung Kumar: My retirement plan was to pursue painting as a hobby and make masterpieces that would be sold for millions.

Little did I know that COVID would happen and it'll put a halt on my films. Amid the lockdown, my wife Vanita and I, who are the board members of an NGO "Animals Matter To Me" (AMTM), realised that there would be no one to feed the stray animals across Mumbai and we would need funds to take care of the 1,500 animals living at the cageless sanctuary in the Malad area.

This gave me a purpose to paint again and raise funds by auctioning artwork on social media. We raised over $40,000 that went directly for animal welfare. I got hooked on painting again and throughout one year, I must have made over 1,000 artworks.

Sputnik: When did the art bug bite you?

Omung Kumar: When I was four years old, I used to make my superhero comic books using my imagination and artwork.

Moreover, every weekend, I would make 15-20-foot-tall superheroes on the terrace with coloured chalk and people used to come to see it and pay me too. I would also paint portraits for people and the joy of earning money during my growing up years made me go on.

Sputnik: During the pandemic, you made the "Junk Series" artwork that caught people's eye. Where did you get the idea from?

Omung Kumar: There is a well-known proverb that "necessity is the mother of invention". During lockdown, I couldn't get the canvas. So, my staff got me flat metal steel from the nearby mill yard and a wooden board affected by termites. The moment I saw it, my mind started bursting with ideas to make the junk into art. The "Junk Man" artwork got a lot of praise and I look for more such junk to convert it into art.

Sputnik: Being an artist, an actor, a set designer, and a filmmaker, how come you wear so many hats?

Omung Kumar: When I was a kid, I was always inclined towards acting, and painting because my parents were from the same field. I was inspired by them. The stage became my playground, and from winning school competitions to acting in the TV shows "Khel Khilone" & "Magic Lamp", doors of opportunities opened up one after another.

During my undergrad years, I couldn't get admission to art college. So, I enrolled myself in commercial art that involved advertisement. From there, I got into modelling and also hosted a TV game show "Ek Minute". I was happy being the jack of all trades in the creative world.

Sputnik: How did you get into set designing and filmmaking?

Omung Kumar: As a freelancer during my college days, I used to paint over 90-foot-long theme-based scrolls that were used as a backdrop in films. From there, I got into making grand sets for films such as "Saawariya", "Black" and TV show "Bigg Boss". My biggest project so far has been the "Kingdom of Dreams" in Delhi which is a hub for live dance, drama, and music events.

Working behind the scenes prepared me to take the plunge into filmmaking and then I made my debut with a biopic, "Mary Kom", played by Priyanka Chopra which got me many awards. In pursuit of all this, my painting took a back seat until the lockdown happened.

Sputnik: How are you planning to take your art forward?

Omung Kumar: I want to exhibit my work at the Paris art exhibition 2022. Moreover, I want to create a world of art, a thousand times bigger than the Kingdom of Dreams. It will have a universal world of art and creativity that will include an amusement park, larger-than-life film sets, and everything creative under one roof.

I also aspire to make one cult artwork that the whole world will like. I wish that my work should come to be compared to the likes of veteran painters like Leonardo da Vinci.

Omung Kumar: I'm planning to start shooting in July for another project, "Fauja", which is a biopic on the world's oldest marathon runner Fauja Singh. The shooting of another film "Janhit Mein Jaari" has been rescheduled to September.