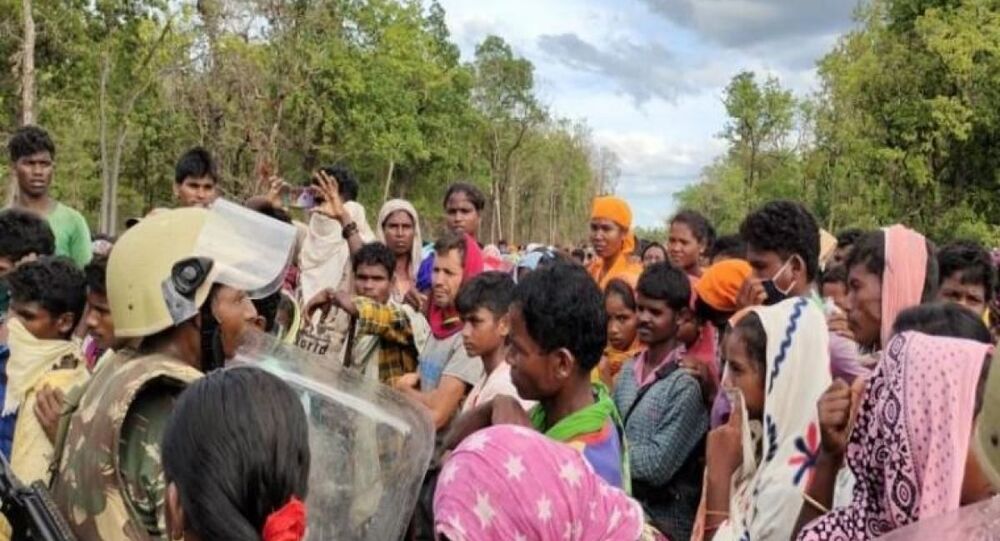 Given the constant state of conflict between the insurgents and security personnel, the villagers in Bastar have started to become hostile towards the government's troops. The locals fear that the government's bid to increase security in the region threatens to suppress tribal people and their voices.

Thousands of tribal villagers in Chhattisgarh's Bastar town have been protesting for a month against the establishment of a paramilitary camp in Silger region. However, given the worseningCOVID-19 situation, the number of protesters have recently subsided to hundreds.

The sensitive Silger region is located near the border of the two worst Maoist (insurgent)-affected districts of Sukma and Bijapur, about 450 km from state capital Raipur.

On 12 May, security forces set up a camp in Silger village despite strong opposition from the locals. The protests gained momentum on 17 May, when three locals died after security forces allegedly opened fire on them. A pregnant woman later succumbed to her injuries.

The Bastar administration and the police have repeatedly tried to convince the villagers to withdraw the protest, stating the rise in coronavirus infections. "Our fear is with such huge gathering there arises a bigger risk for these villagers likely to turn into super-spreaders in their hamlets amid the pandemic," Bastar Inspector General P Sunderraj told reporters.

But locals from at least 40 villages claim that none of their demands have been met so far.  Since 2020 the region has seen rising friction over the establishment of security camps and road construction. The police claim that the protests in the region have been "staged under pressure from the insurgents".

The violent history of Bastar saw a new chapter today when, perhaps the first instance in a decade, police opened fire at unarmed adivasis in Silger, killing 3 and injuring at least 16.

It wasn't a fake encounter, or a gunfire at night.

The state government last year announced it was setting up eight new security camps in Dantewada, Bijapur, and Sukma districts.  Tribals have been digging roads as a means of protest to keep the security forces out.

"A 28-day long protest can't be called off abruptly. Villagers are still trying to keep the protest going in smaller numbers. None of their demands were met by the district administration. The only thing that was done is to set up a magisterial enquiry, which is a routine procedure. First, they irked the villagers into mass protest by opening a new camp during Covid times, then they used the spread of coronavirus to end the protest summarily. Nothing was achieved. If Covid is increasing in the area, the administration is to blame," human rights activist Bela Bhatia told Sputnik.

This week, rights activist Soni Sori tried to mediate talks between the locals and the administration. In 2021 alone, the state has witnessed 75 instances of killings where civilians, insurgents and security personnel have died.

At Least 13 Maoist Militants Killed in Police Encounter in India