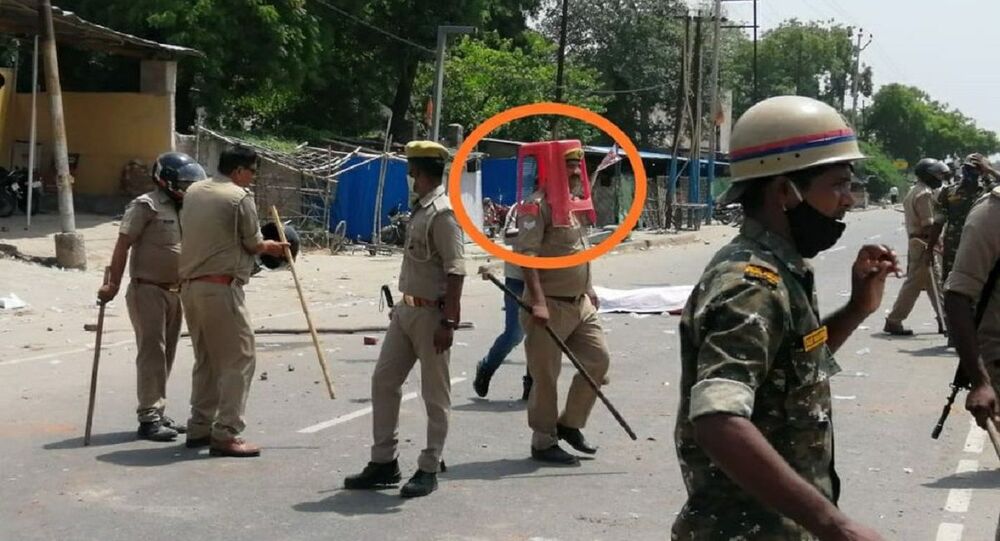 Law and order in India's Uttar Pradesh has been a matter of concern for the successive state governments. As many as 2,317 rape cases were recorded in 2020, making it one of the most unsafe for women. As India's most populous state, it witnessed nearly 9% of all crimes registered nationwide.

The Police Chief in the Indian state of Uttar Pradesh  has sought an explanation from his department a day after photographs of some Uttar Pradesh police personnel using a bamboo basket and a plastic stool as protective gear during a riot, went viral on social media.

Four cops have been suspended from duty on Thursday in the incident, which occurred while police tackled a riotous mob.

Some cops resorted to using wicker baskets to protect themselves from stones pelted at them.

The incident showed a shortage of helmets and protective gear among the cops and led to widespread criticism of the police.

As the images went viral, Inspector General of Police, Lucknow Lakshmi Singh ordered suspension of the Station House Officer (Inspector) Dinesh Chandra Mishra and three other policemen for "laxity, incompetence and being unprofessional".

​The action came after the Uttar Pradesh (UP) police faced criticism for not equipping its force with adequate protective gear, when they are deployed to control law and order.

The incident originally occurred in the state's Unnao Town after two people were killed in a road accident on 16 June. The bodies of victims were sent for post-mortem examination by the police. But instead of being taken to the hospital, relatives of the victims took the bodies to the site of the accident and placed them on the road to stage a demonstration.

After that, the villagers gathered at the spot and began a protest demanding compensation for the victims' families. When the police tried to persuade them to return home, they attacked the police by pelting them with stones.

Caught by surprise, the cops were captured on camera wearing plastic stools on their heads for want of helmets. As many as 12 policemen suffered injuries.

The police have arrested more than 40 people for rioting and filed charges against them.