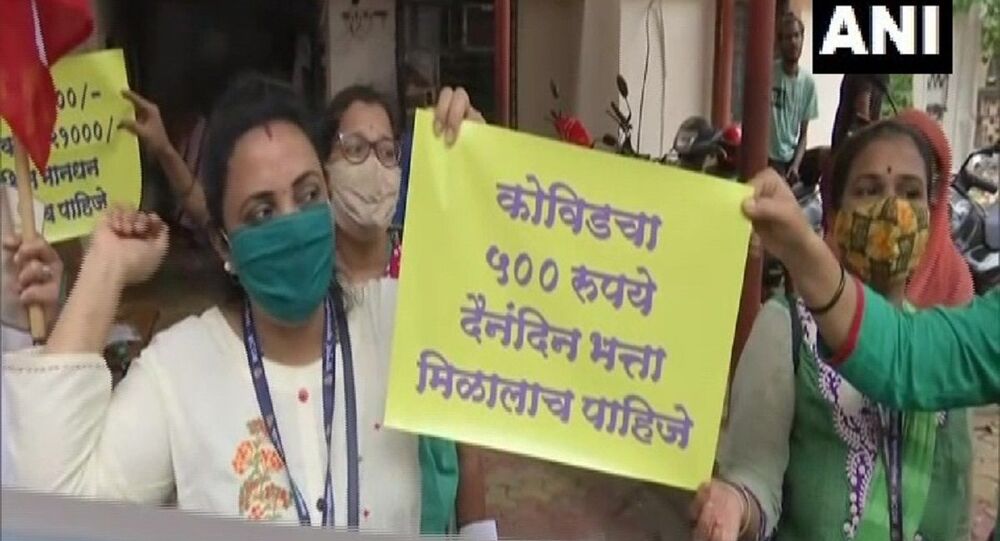 ASHAs are the key frontline healthcare workers helping the government connect with rural people. They play a vital role in combating the country's health crises, such as the COVID-19 pandemic. But time and again, they have suffered the government's neglect. They don’t have regular salaries; their work is supposed to be voluntary and part-time.

About 72,000 Accredited Social Healthcare Activists (ASHAs), known for the crucial role they play in remote areas of every Indian state, have announced an indefinite strike in Maharashtra. They are protesting against inadequate pay and the unsatisfactory safety measures being provided to them to carry out COVID-19 surveys, among other issues.

"Other healthcare workers are being paid INR 9,000 ($122) monthly for the same work that we are doing. Currently, most of us hardly earn INR 1,650 ($22) per month," Chayya Deshmukh, one of the health workers, told Sputnik.

Last year, the Maharashtra state government had promised to increase wages. But, according to Deshmukh, no raise has been given to them as yet.

"We are receiving the minimum salary. How are we supposed to live with such a small amount?" she asked.

She said, moreover, they have even been denied the additional daily payment of INR 300 (about $4) which they were receiving during the first COVID wave.

As the second wave primarily impacted the rural part of the country, these health workers’ working hours were also raised from up to four hours to about eight to nine hours. Their workload also increased, with cases spiking in villages. So far, the state has reported at least 20 ASHAs dying due to COVID-19.

Opposition leader Devendra Fadnavis has urged the state government to accord the highest priority to fulfilling the demands of ASHAs.

"At the time of the COVID-19 pandemic, these ASHAs have shown extraordinary courage to serve the people in rural areas. They are the foot soldiers reaching out to people in remote areas. It is the responsibility of the state government to look after them. They should get higher remuneration and provided better working facilities," Fadnavis, the former Maharashtra State chief, stated.

He also described the government's "neglect" towards the health workers as "unfortunate".

Maharashtra so far has recorded 5.9 million Covid cases and 114,000 deaths.