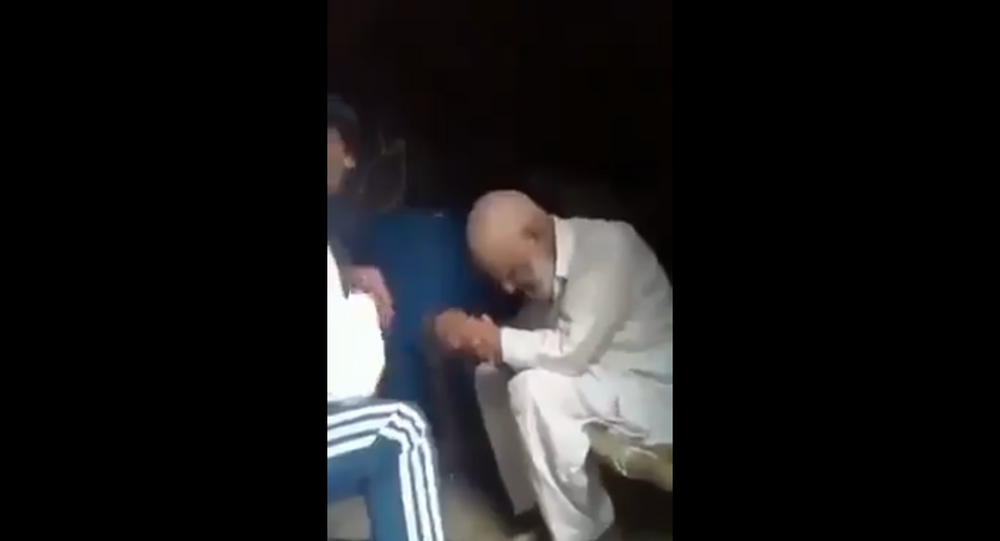 Activists claimed that over the past few years there has been a sudden rise in hate crimes against Muslims in India. The Narendra Modi-led government has rejected the allegations and said such incidents are being used by those with a 'vested interest' in maligning the reputation of both the government and the country.

A video of an elderly Muslim man being assaulted by a group of people, and forced to chant Hindu songs while his beard is chopped off in Uttar Pradesh state has sparked outrage on social media.

The incident, that supposedly took place on 5 June 2021, came to light only this Monday after a Twitter user posted a video of the man, identified as Abdul Samad Saifi, being beaten with a stick and forced to chant 'Jai Shri Ram' (Glory to Lord Rama) and 'Vande Mataram' (I bow to thee, Mother).

An elderly Man, Sufi Abdul Samad Saifi was attacked by five goons in Loni, Ghaziabad. He was threatened at the gun point, beaten, assaulted and they forcefully chopped off his beard. @ghaziabadpolice @Uppolice pic.twitter.com/0QphDcnKUN

Samad broke down while describing his horrifying experience in another video in Hindi and said that he was on his way to a mosque and was allegedly abducted from an auto-rickshaw. His assailants reportedly accused him of being a Pakistani spy.

“I was on my way when I was offered a lift. Two more men then got inside [the auto-rickshaw] and told me to stay put. Then they took me to a room and locked me up and thrashed me. They forced me to chant slogans… they took my mobile away… they got a knife and cut my beard,” Samad said.

Samad also showed bruises on his back and said that the attackers threatened his life and claimed that they had killed many Muslims before.

“They even showed me a video of other Muslims being attacked”, he said.

He shows his wounds. pic.twitter.com/bvDLsXX3O9

The Ghaziabad police have registered the case and are searching for suspects.

Assaults Against Muslims in US Rise to Highest Level Since 2001