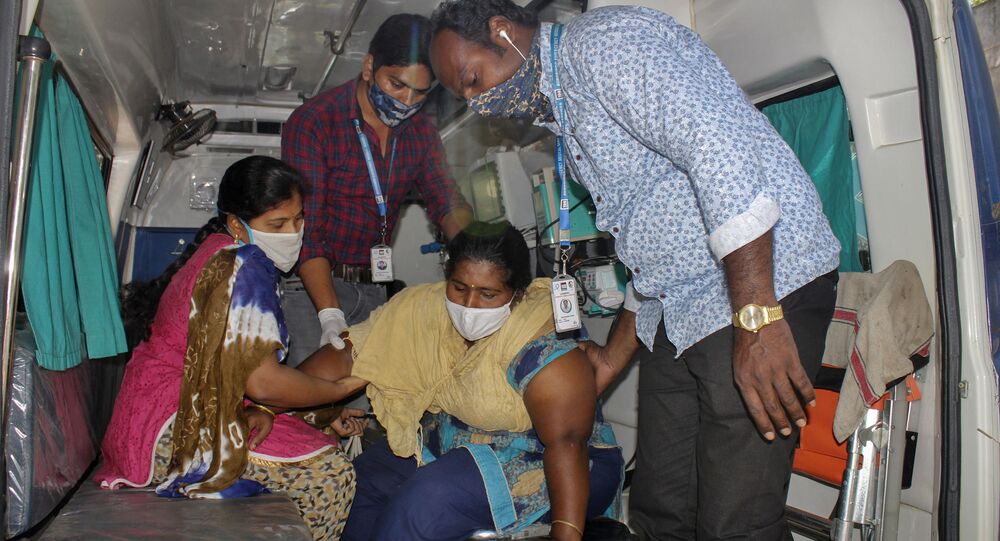 During the raging COVID-19 crisis in India, ambulance service providers and drivers have been in a terrible state, with prolonged working hours, struggling mental health and the ever-present risks of getting the infection turning the lives of frontline workers upside down.

Death, never-ending SOS requests for beds, a lack of oxygen -- the second wave of the coronavirus pandemic has crippled India's healthcare system. While doctors and healthcare workers are busy saving lives, emergency service providers including ambulance drivers are on the move too.

During April and May, when the number of COVID-19 deaths crossed over 100,000 and cases rose around 400,000 a day, ambulance drivers worked prolonged hours to reach critical patients due to a shortage of manpower. In Indian remote regions with poor roads, their troubles increased exponentially, and performing their duty has become, for some, onerous.

These drivers told Sputnik that though they are used to seeing death, they have never before experienced this level of pain and trauma.

© REUTERS / DANISH SIDDIQUI
'Unsound': India Slams Report Claiming Country's 'True' COVID Death Toll is Up to Seven Times Higher
Chotu Paswan, from India's Bihar state, is running a voluntary ambulance service in Patna. Though he is not getting as many SOS calls in June, the COVID situation in April-May still sends a shiver down his spine.

"I was helping my brother with his NGO 'Maa Vaishno Devi Sansthan' and also helping people as my own initiative. Keeping in mind the circumstances, we used to charge not more than $27-$40 (INR 2,000-3,000). Everything was heartbreaking. I have been in this business for the last 10 years but this was scary. We have seen so many families getting destroyed just like that. May was the worst month. One driver used to handle over 10 bodies per day," Paswan told Sputnik.

The second wave of the coronavirus pandemic has been a harrowing time for caregivers, as they go from hospital to hospital looking for admission, or to overfilled funeral homes. Most of the time, this driver had to wait for hours at hospitals for beds and sometimes the patients died waiting in the vehicle.

"When the oxygen shortage started happening we tried helping people with cylinders too. Our families were scared. But leaving our duty of helping people wasn't an option. But yes we have seen things that still haunt us. In this disease, people are not dying with dignity. With God's grace things are getting better now. The kind of cases we were seeing every minute we were terribly scared. It was hard to even sleep at night," Paswan added.

These episodes had an agonizing impact on the mental health of these workers as some drivers said that the wait for a turn at overwhelmed crematoriums was particularly painful.

© REUTERS / ANUSHREE FADNAVIS
India's Business Sector Comes to Aid of COVID-Hit Employees, Bringing Hope With Slew of Measures
Sometimes, they had to wait over 10 hours with dead bodies and grieving family members trying to find a space and conduct the last rites.

"My entire family was sick but I couldn't see them as I was ferrying patients and dead bodies day in and out. I used to get worried and I feared what I would do if my wife or children met with this same fate. I have been working as an ambulance driver for the last 12 years and what we witnessed in this pandemic will haunt us for the rest of our lives. Poor people are always the worst-affected but seeing well-to-do people getting helpless and hopeless was scary," said Naresh (name changed), another driver.

Since the beginning of the pandemic, these frontline workers have risked their lives and some have died and lost loved ones, too. Many are simply exhausted.

"We work with dead bodies all the time. I get nightmares and I can't get the helpless cries of the family members out of my head. There was also a time when I did ferry 100-200 bodies including small kids on a single day. This is hard. Too hard. These people who died, what was their fault? None of them deserve this," another driver Gopal (name changed), from Delhi, told Sputnik.

Although the situation is improving, there is now an increasing number of complaints about the exorbitant amount of fares charged by private ambulance service providers. To control the situation, many Indian state chiefs jumped in and set a fixed rate for carrying patients. These leaders also warned of strict actions for violating the edicts.

Last month, in Rajasthan, a father in the state's Kota region carried his dead daughters body in his own car after an ambulance driver demanded an exorbitant price. The state Chief Minister condemned that event and stated that action had been taken against the employees. Similar incidents have been reported across the country.