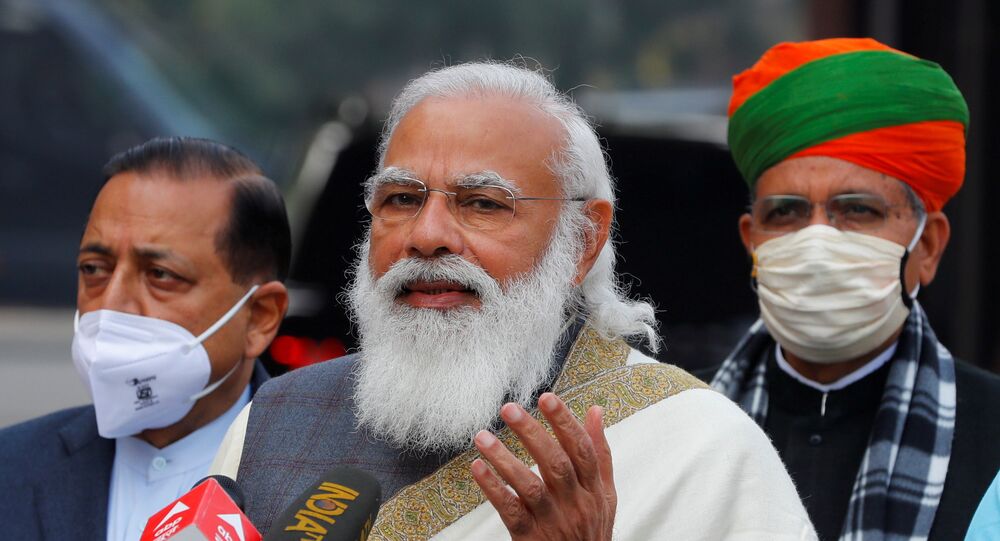 Between the COVID-ridden years of 2020 and 2021, Prime Minister Narendra Modi's long, white beard has grabbed the attention of many. In March 2020, when PM Modi announced a national lockdown, his beard was neatly trimmed as usual. Over a year later, however, Modi's beard has grown to reach his chest.

Urging PM Modi to get his beard groomed, a tea seller named Anil More from the Baramati region of Maharashtra has sent the Indian head of government INR 100 ($1.50) to sponsor his salon visit, the Indian media has reported.

© REUTERS / ANUSHREE FADNAVIS
India’s COVID-Hit Industries Shut Down, Furloughing Over 7 Mln Workers; Analyst Suggests Remedies
In a letter attached along with his money order, More advised PM Modi that instead of growing his beard, the highest authoritary in India must focus on growing employment opportunities, healthcare facilities, and the number of vaccinated Indians for the benefit of the country.

"PM Modi has grown his beard. If he should increase something, it must be employment opportunities for the people of this country. Attempts must be made to accelerate vaccination for the population and there must be efforts to step up the existing medical facilities. The PM must make sure people are rid of their miseries that are caused by the last two lockdowns", the Indian media quoted the tea seller as saying.

​The letter specified that More's gesture of sending PM Modi the money to get his beard shaved was in no way meant to cause offence.

"I have the utmost respect and admiration for our PM. I am sending INR 100 from my savings to him so that he shaves his beard. He is the supreme leader and I don't intend to hurt him. But the way in which the problems of the poor are growing by the day due to the pandemic, this is a way to draw his attention", the letter reportedly added.

The letter ostensibly further urged the Indian PM to provide financial assistance of INR 500,000 ($6,800) to the relatives of those who have lost family members to the pandemic and a sum of INR 30,000 ($410) for the families that lost their incomes during the lockdowns.

While PM Modi did not react to More's gesture publicly, Indians applauded the tea vendor's bravery and his good intentions.

🙏 Many thanks to that tea seller uncle for reminding Modi ji about his responsibilities . I would like to request to Mr. PM ,Take a look at how the per capita income will increase ,how the economy will gain momentum instead of growing beard. #WestBengal #ModiDisasterForIndia pic.twitter.com/lR8ZPyegzu

Anil More is a real tea seller and a hero. https://t.co/w5fqV6I3yo

Nice approach by owner of a tea stall