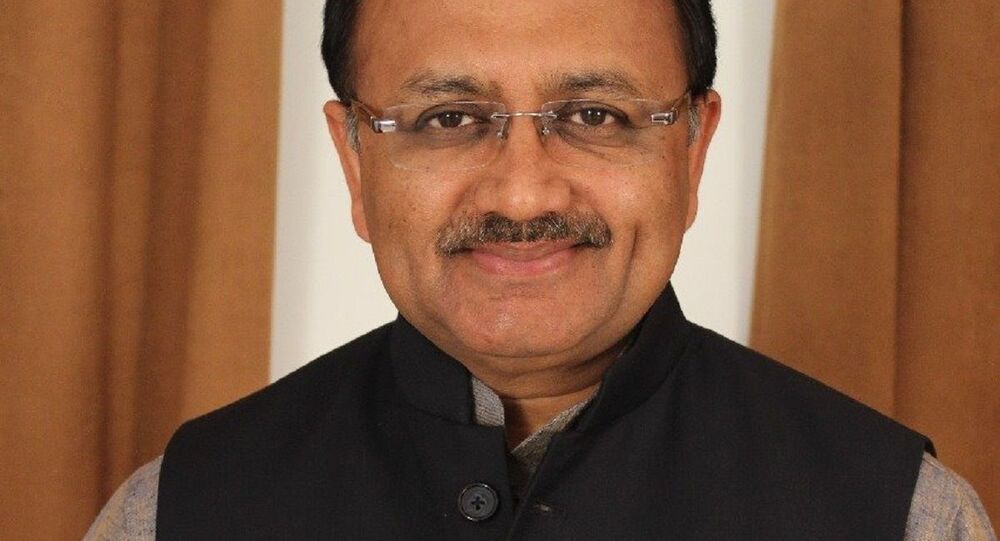 Uttar Pradesh was one of the worst-affected states during the second wave of the pandemic – the number of active cases has recently declined but some rural areas still struggling to get much-needed medical help.

Uttar Pradesh, India's fourth-largest state by area and largest in terms of population, will go to the Assembly polls next year. The current Bharatiya Janata Party (BJP) government has been slammed by the opposition and public for its handling of the pandemic. State cabinet minister in the government of Uttar Pradesh Sidharth Nath Singh spoke to Sputnik about COVID, unemployment, and other issues.

Sputnik: What is the government doing about the COVID surge in rural areas?

Sidharth Nath Singh: The Uttar Pradesh government has been quite vigilant about the COVID spread in rural areas. We have been very aggressive with our "Testing, Tracking, and Treating" initiative, as well as with the partial curfew and aggressive vaccination in the state.

Testing was already ramped up in rural areas from 31 March and 5 May. We started a special focused campaign in rural areas with more than 70,000 village surveillance committees in 97,000 villages formed. These committees provided free medical kits to those who had mild symptoms. Rapid response teams (RRTs) also did antigen and RT-PCR tests. As of now, no COVID symptoms are being reported from almost 68,000 villages; thanks to the Testing, Tracking, and Treating campaign we have controlled the COVID surge in rural areas. Active cases are down by 93 percent since the peak of 38,370 recorded on 22 April this year.

Sputnik: Generally the rural population has been reluctant to get vaccinated – is the government planning an awareness drive ?

Sidharth Nath Singh: Vaccine hesitancy is a challenge, however, to tackle the issue accredited social health activist (ASHA) workers and local health workers have been tasked with raising awareness about getting vaccinated via different means. We have facilitated around 1.3 million common service centres across the state to help people in rural areas to get the jab. To further encourage the rural population, we have also launched the "Mera Gaon, Corona Mukt Gaon" ("My Village, Corona Free Village") campaign to raise awareness.

Sputnik: Uttar Pradesh has been hit hard by the second wave. How are you preparing for a possible third wave?

Sidharth Nath Singh: Initially, the situation was bad but we have managed to contain the second wave successfully. Now, Uttar Pradesh is fully prepared to tackle a possible third wave.

The government will leave no stone unturned to ensure top-class treatment in hospitals, while each of the state's 75 districts will be decked out with a 100-bed paediatric intensive care unit (PICU). We are setting up more than 400 oxygen plants to ensure a continuous supply of oxygen at PICUs in every hospital. To improve health facilities in rural areas, the government has allocated over $750 million for the National Rural Health Mission, $180 million for Ayushman Bharat Yojana, and $20 million for Ayushman Bharat-Chief Minister Jan Arogya Yojana.

Sputnik: Unemployment has been one of the major issues in Uttar Pradesh. How are you freeing up jobs for people?

Sidharth Nath Singh: Uttar Pradesh is the only state to have imposed a partial curfew instead of a full lockdown like other states. Partial curfew has allowed the industries to function without any breaks and essential businesses have remained open, which employ millions.

The current unemployment rate in Uttar Pradesh from 1 June 2021 stood at 6.3 percent, which is one of the lowest in the country as per the Centre for Monitoring Indian Economy (CMIE). It has increased from 4.1 percent due to the second wave of COVID but prior to 2017 unemployment was more than 15 percent and after we came to power the figures drastically came down to 2.1 percent in 2017.

Uttar Pradesh has worked to generate employment in the state and the result is quite evident with the figures now standing at 6.3 percent. More than five million new MSME units have provided employment to over 10.8 million people. More than 40 million women are being added to over four million self-help groups.

Sputnik: Last year, the government planned to train migrant workers and provide them with jobs in the state itself. How many jobs have been provided to date?

The Yogi government managed to complete the skill-mapping of four million workers who came back from other states and provided them with jobs in their villages.

Sputnik: The results of the panchayat elections did not match expectation of the party. What do you think went wrong?

Sidharth Nath Singh: In the absence of official party symbols, it's not possible to determine the exact number of winners for any party. Independent candidates, who were not supported by any party, were the biggest winners. Those who won as independent are mostly from the BJP and are now tyring to return to the party.

Sputnik: Is the Yogi government planning to provide relief to small businesses that suffered due to the pandemic?

Sidharth Nath Singh: In order to extend the benefits to MSMEs in the state, our government recently passed a new MSME Act which strives to boost the establishment of MSME units in the state.

We have also established the Uttar Pradesh COVID Emergency Credit Scheme, which helps existing and new entrepreneurs either to increase the production of existing medical supplies or to set up new supplies. The establishment of the new unit is facilitated through a capital subsidy of up to $100 million.