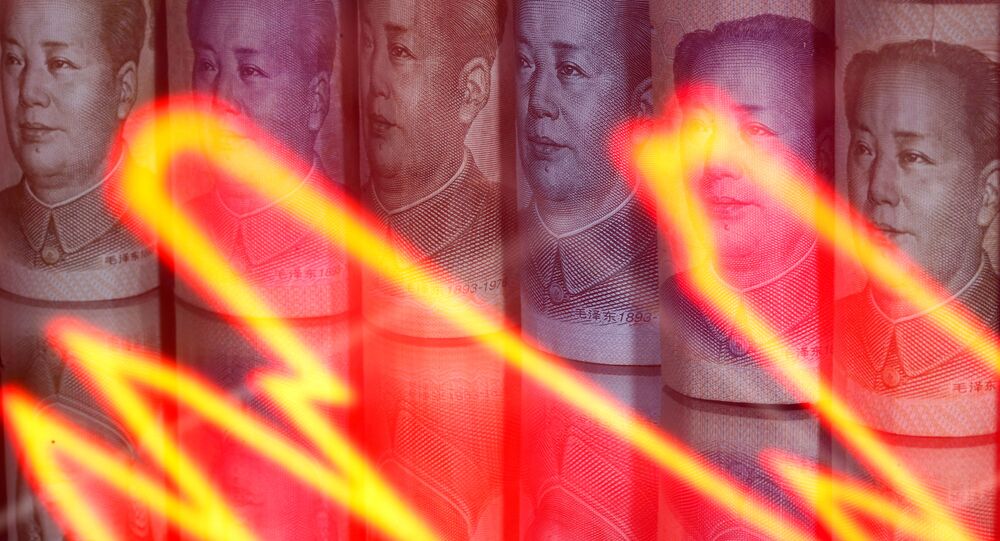 The Chinese government has stepped up efforts to challenge the dominance of the US dollar as a global reserve currency since 2016 when the International Monetary Fund added the yuan/renminbi to its Special Drawing Rights basket.

Despite still being a dominant currency across the globe, the share of the US dollar held worldwide by the government, central banks, and other financial institutions as foreign exchange reserves has reached its lowest level in the last 25 years – 59 percent – during the fourth quarter of the financial year 2020.

The IMF’s Currency Composition of Official Foreign Exchange Reserve (COFER) survey has found that the US dollar has declined mostly due to increasing competition from other currencies used by central banks for international transactions.

© AP Photo / Susan Walsh
Federal Reserve Chairman Says China’s Digital Yuan Will Not Work in US
The share of the euro has fluctuated around 20 percent, while the share of other currencies including the Australian dollar, Canadian dollar, and Chinese renminbi climbed to 9 percent in the fourth quarter.

The euro accounted for 21.2 percent of global reserves in the fourth quarter of 2020, while the Japanese yen accounted for just over 6 percent, according to the IMF.

Foreign exchange analysts and economists have credited the 12 percent decline, from 71 to 59 percent, since the euro was launched in 1999 to the US monetary policy changes in response to the COVID-19 pandemic and China’s growing capacities in global trade.

“The decline in the share of the US dollar in the world economy can be attributed to the emergence of China as the capital or debt provider to many parts of the world, along with its increasing share in the world trade,” economist Sudhanshu Kumar said.

The decline would have been even sharper if other currencies had not seen a similar deterioration in their own long-term fundamentals.

Despite being not freely convertible to other currencies, the internationalisation of the Chinese renminbi could lay down a convincing and consistent framework for China’s financial interactions with the rest of the world.

Apart from this, the People’s Bank of China has also recognised that the renminbi's appreciation would help in controlling inflation as well as foster a planned shift in economic focus away from external and towards domestic demand.

The digital renminbi will be another major advance, especially for trading relations with Asian partners. Although worries about state control will impede some foreign usage, a digital currency will bring closer implementation of some longer-term strategic goals which Beijing, years ago, described as a means of establishing a renminbi zone in Asia and beyond.

© AP Photo / Xinhua, Gao Xueyu, File
Huawei to Build Standards, Specs for China's Digital Yuan Rollout as Tech Nationalist Momentum Grows
China has already distributed some 200 million yuan (US$30.7 million) in digital currency as part of pilot projects across the country. China has also stepped up its efforts to use the digital yuan in cross-border payments.

Right now, the renminbi accounts for about 2 percent of global foreign exchange reserve assets, the Morgan Stanley report published in 2020 pointed out. But Morgan Stanley forecasted that the share of renminbi as a global reserve currency could rise to between 5 percent and 10 percent by 2030, surpassing the levels of the Japanese yen and British pound.

It is believed that the financial market opening in China will further strengthen the presence of renminbi as a foreign reserve among different countries and central banks.

As of end 2019, there are approximately 70 central banks around the world that hold renminbi in their reserves, up from 60 at the end of 2018, according to the PBOC’s annual RMB internationalisation reports.

US Dollar Still Dominates, Despite Decline

Many countries have pegged their currency to the US dollar, while a massive amount of world debt is still denominated in the US dollar.

The most crucial advantage of the US currency is that there are multiple global market challenger currencies against a single currency. Unless the acceptability of a single currency is at least as good as the US dollar, its role will remain significant as a world currency, analysts say.

Analysts also think that as of now there's no threat to the dollar losing the title as the world’s dominant reserve currency as more central banks and major financial institutions hold it for use in international transactions and investments than any other currency.