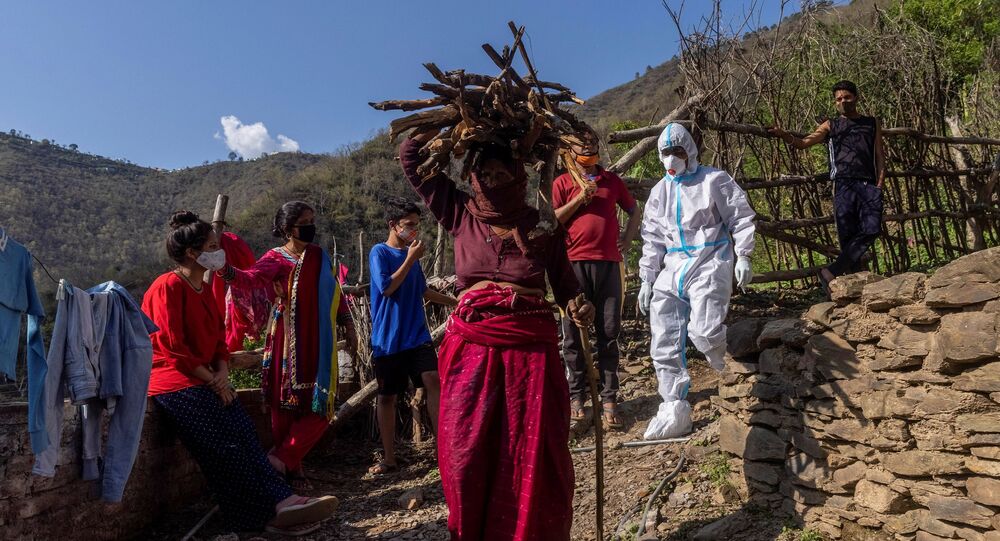 The Himalayan state of Uttarakhand recorded a sharp rise in COVID-19 cases and deaths during May. In most villages, many people were forced to walk for hours to reach remote healthcare centres, though many others preferred to stay at home instead.

Kishore Dimri, of Barshali Village in India’s mountainous state of Uttarakhand, visited a doctor in the middle of May, complaining of fever and cold symptoms. He was advised to get a COVID-19 test done in the nearby Karanprayag town if his health didn't improve.

Barshali, a hilltop village without proper connectivity to the main road, is 1,460m above sea level. Karanprayag - the nearest town - is at least a two-hour walk away.

On 27 May, Kishore died on his way to hospital in the state capital of Dehradun. His nephew Vishal Dimri, said that his 38-year-old uncle’s oxygen level was consistently dropping.

"When he visited the healthcare centre at Karanprayag, they suggested taking him to the big hospital. But my uncle failed to make the eight-hour journey from Karanprayag to Dehradun," Vishal told Sputnik.

Jagdamba Nautiyal, 27, of Nauti Village who works with an international IT firm (the name of which he doesn't wish to reveal), says people are scared and sceptical. “They have attached shame and stigma to the disease. Villagers showing COVID-19 symptoms are not coming forward to get tested. Many have shunned tests for the fear of testing positive."

According to Nautiyal, the healthcare dispensary in Karanprayag has oxygen cylinders and a COVD-19 testing kit. But "it still doesn't have electricity for the whole day. Now, the government is advertising on radio and doing newspaper campaigns to encourage testing. But this should have been done in the month of March or April. They should have been prepared with better healthcare facilities and vaccines," he said.

"The majority of the State’s area - 86 percent - is mountainous. But the development took place in plain areas only,” Anoop Nautiyal, an Uttarakhand-based social activist and founder of the non-profit Social Development for Communities Foundation, said.

According to a report published by IndiaSpend in 2017, only 68 percent of primary health centres (PHCs) - the frontline of the basic healthcare system - work round the clock. The second-rung community health centres are short-staffed. They are 83 percent short of emergency specialists and have half the number of required nurses.

"In the state, many Public Health Centres act as referral centres here. They just refer the patient to a bigger hospital in plains," Nautiyal stressed.

According to the social worker, the government efforts are not a satisfactory response to what the state requires. "Government is obviously not sitting on its hands. But the actions taken by the state government are half-hearted."

Nautiyal said that there is no healthcare model in Uttarakhand, and because of this, the state is suffering.

"We are a hilly state, and part of us is plain. We cannot copy the healthcare model of other Indian states, our challenges are different from other Indian states. But, sadly in the past four-year government, the ruling Bharatiya Janata Party (BJP) government failed to plan on health policy," he stressed.

As of 7 June, the state of Uttarakhand had 19,283 coronavirus patients.

In April, Haridwar hosted a month-long Hindu festival of Kumbh, where hundreds of thousands of Hindu monks and devotees gathered to take a holy dip in India's holiest river, the Ganges. The event turned out to be a super-spreader of the coronavirus.