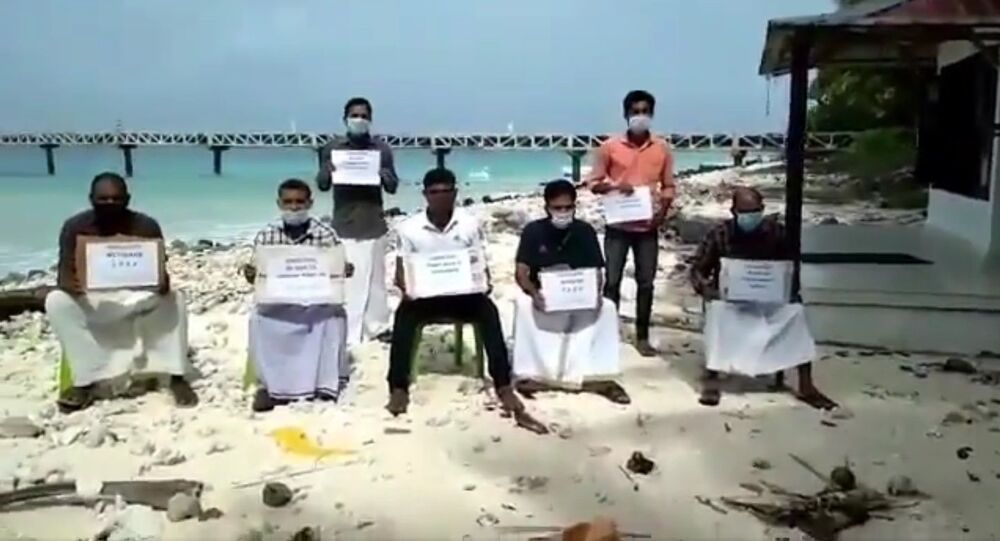 Hundreds of inhabitants of India's Lakshadweep Island in the Arabian Sea have been protesting against controversial new reforms which include rules on the easing of Covid restrictions, the introduction of the Gunda (Goon) Act, and a ban on beef. It was introduced by Lakshadweep Administrator Praful Khoda Patel from Bharatiya Janata Party (BJP).

Residents in India's Lakshadweep organised a 12-hour hunger strike on Monday against the new ‘reform rules' introduced by Administrator Praful Khoda Patel of the Bharatiya Janata Party (BJP), in a bid to develop the island as a major tourist attraction "like the Maldives".

While many residents took to the streets and others protested from their homes, some literally went underwater holding placards and urged the government to roll back the ‘Lakshadweep Development Authority Regulation, 2021 (LDAR 2021)’.

Calling it an "anti-people" reform, locals in Lakshwadeep, which has a mostly Muslim population that is heavily dependent on fishing, have alleged that Patel has unilaterally lifted restrictions on the use of alcohol which is against their culture. They also slammed Patel for banning beef and demolishing fishermen's sheds along the coastal areas.

With the #SaveLakshadweep hashtag, several celebrities, politicians, and netizens have come forward to extend their support to the inhabitants of the island. They have been amplifying the agitation on social media by sharing photos and videos of the protest.

People of #Lakshadweep are protesting against administrator Praful Patel and the controversial new draft rules for the island. pic.twitter.com/xvPKBld2Sw

Islanders of Lakshadweep are on a 6 am to 6 pm hunger strike seeking the recall of anti-Dweep administrator Praful Khoda Patel and withdrawal of all insensitive executive orders & adverse draft legislation like the Lakshadweep Development Authority Regulation #SaveLakshadweep pic.twitter.com/iW2l2KEMY2

Entire Lakshadweep is observing Hunger strike now other than essential services everything is closed,people may can avoid us but we never gonna stop this fight,we want the antipeople,anticonstitutional laws withdraws and administrator called back. #SaveLakshadweep #HungerStrike pic.twitter.com/8mNtFXM3lW

An administrator who abuses his authority should be fired. Do not enforce anti-people laws. I am also participating in the hunger strike of Lakshadweep. #SaveLakshadweep #recalltheadministrator #uniteforlakshadweep pic.twitter.com/5zVaqPY87S

The protest erupted last month after a person, claiming to be a native of Lakshadweep, posted a video in which he can be seen accusing the administration of destroying sheds and taking away the jobs and livelihoods of local fishermen.

This is what Lakshadweep people get for being peaceful for generations.
This is not the only case, many more undemocratic regulations are going to hit our people. #Saveus#SaveLakshadweep #RevokeLDAR @BrutIndia @TheQuint @AltNews @guardian @AJEnglish @ndtv @aajtak @RanaAyyub pic.twitter.com/6Ytb4IJaXZ