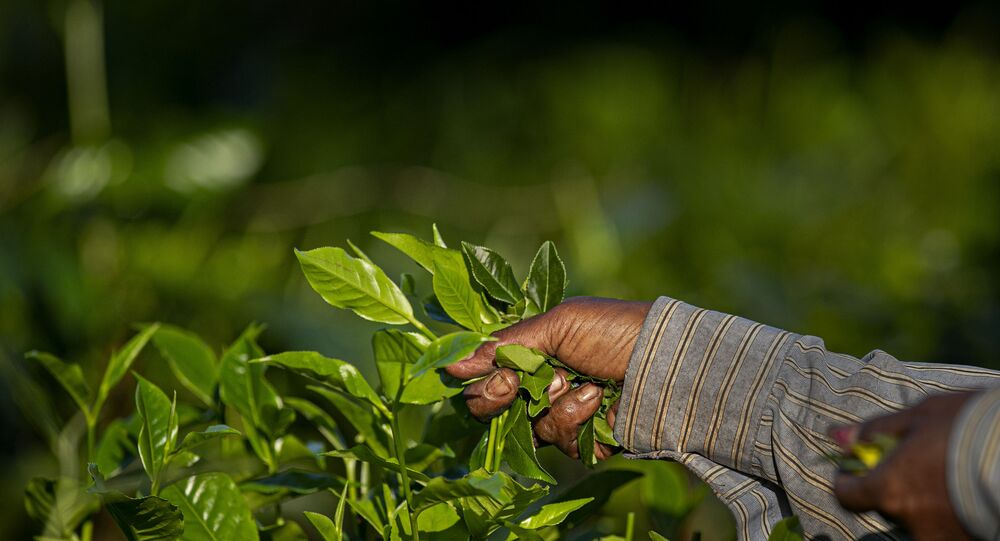 India is the second-largest tea exporter in the world, and the main tea-growing regions exist in the states of Assam and West Bengal. While some $831 million worth of Indian tea was exported in 2019, the level reduced to $826.47 million in 2020, due to pandemic lockdowns. Tea growers note that this year’s lockdown could cause a further decline.

Indians all over the nation have been badly hit by the coronavirus and the lockdowns, and the lives of daily wagers linked to tea gardens in the Assam state have been jolted as well.

The 38-year-old shared with Sputnik: “I contracted COVID-19 in last week of April. By the time I recovered, more cases of COVID had been reported and six of my friends had already died”.

Gurung works at the Zaloni Tea Estate, near Duliajan Town, in the State’s Dibrugarh District an area known for the highest number of tea estates -- 177.

Zaloni, one of the worst-hit tea estates of Assam, has reported 200 COVID-19 cases. On 7 May, the area was declared a containment zone.

Statistically, per Assam’s Labour and Welfare Department, since April, around 7,200 COVID-19 cases have been recorded across 403 of the state's estimated 800 tea gardens, and at least 65 people have died as of 3 June.

The Assam tea industry accounts for over 50 percent of India’s tea production, which creates direct or indirect employment for some 17 percent of the state’s population of about 4.5 million.

Most of these workers are daily wagers, and COVID-19 has added new challenges to their already punishing everyday lives.

On 11 May, the state government initiated a complete lockdown, restricting movement to slow the spread of the deadly virus.

Accessibility of Medical Help a Challenge in Hilly Areas

Assam is one of the four Indian states where legislative assembly polls were held in March-April. Thousands of people participated in poll campaigns, without masks or maintaining any form of social distance. The state is now witnessing a spike in COVID cases.

According to Dhiraj Gowala, the president of the All Assam Tea Tribes Student Association, a student body representing tea workers, even after a few tea gardens in Dibrugarh and Biswanath districts were declared a containment zone in May, workers at other tea gardens took no health precautions.

“There have been instances when patients died even before detecting that they were COVID positive, especially in districts like Dibrugarh, Golaghat, Charaideo, Tinsukia and Jorhat, all located in upper reaches tea belt”, he said.

On 29 May, Assam state media, quoting government statistics, announced: “In last 13 days, there has been an over 400 percent spike in COVID cases among tea garden workers. Deaths have also gone up threefold”.

© CC0 / Engin_Akyurt
Healthcare Workers in India Suffer Fatigue, Depression as Country Battles Covid Pandemic
Gowala shared that some patients waited up to 10 days to be tested for COVID-19, and sometimes hospitals are 30 km away from their encampments and work zones.

“Even when a few cases were confirmed from the tea estate, we demanded proper quarantine centres and tests, as home quarantine is possible for tea workers”, he added.

According to Gowala, most workers share one-room accommodation with their families, with no separate washrooms. Most of these workers share a common area for their everyday basic human needs.

The Indian tea industry has faced a loss in production due to the lockdown curbs in 2020 and a drought in March-April 2021.

“Per our study, the crop deficit from January to May in 2021 will be about 60 million kilogrammes. It was 78 million kilogrammes in 2020 due to the lockdown”, stated Bidyananda Barkakoty, an adviser with the North Eastern Tea Association (NETA), speaking to Sputnik.

“The crop deficit from January to May 2021 will be about 40 percent compared to the same period in 2019”, Barkakoty noted.

Barkakoty said that lockdowns in many countries, suspension of transport facilities, disruption in public auctions of tea, hesitancy among exporters to invest huge sums against uncertain shipments, and disturbance in banking operations, were the major causes behind India’s lower tea export figures.

A week ago, some local activists urged the state government to provide more time to COVID-19 affected workers to recover from the virus infection and assist them financially by providing a minimum wage up front, in cash, for a two-month period. It was also demanded that volunteers from the community be properly trained to monitor the health conditions of others and spread awareness.

As of 3 June, only 3,812 tea garden workers have been vaccinated with a first dose.

© REUTERS / ANUSHREE FADNAVIS
India's Business Sector Comes to Aid of COVID-Hit Employees, Bringing Hope With Slew of Measures
Community advocates believe that lack of public awareness and education, rumours, and the requirement of an online registration process has slowed the vaccination drive.

A student leader, Simson Orang, of the All Assam Tea Student Association (AATSA) shared that in order to make people aware of COVID-19 and safety guidelines, they rented a loudspeaker and visited every home at Murphuloni Tea Estate in Golaghat district.

“Now, for the vaccination, the government said these people need a mobile number. But many people here do not have any cellphone,” he observed.

Following much criticism, the Assam government started vaccination camps in about 299 tea gardens and allowed on-the-spot registrations for those workers in the 18-44 age group.

Locals say the tea workers, who constitute 17 percent of Assam’s total population, are a big voter base for any political party. Ahead of any election, these tea estates are visited by every political organisation but later they are forgotten during legislative debate.