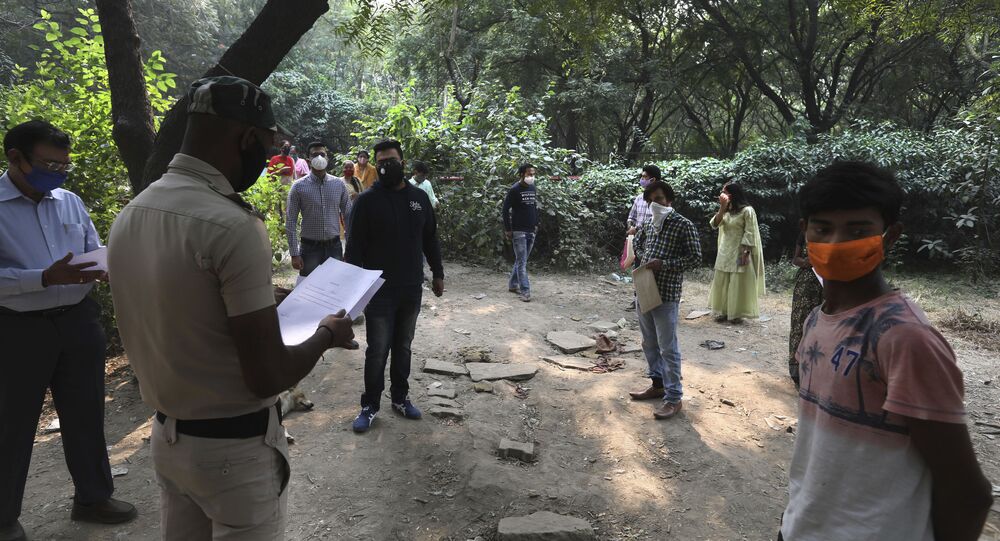 Over the past two months, India has been grappling with a rocketing rise in COVID-19 cases after which several states - including Delhi - have been forced to reintroduce lockdown restrictions on public movement.

Although almost 200,000 people have been prosecuted for breaching coronavirus restrictions during the Delhi lockdown between 19 April and 25 May, enforcement agencies have been unable to recover 86 percent of the fines.

The district administrations, the Delhi Police, and civic body - the Municipal Corporations of Delhi (MCDs) - are responsible for enforcing lockdowns and ensuring that all COVID-19 measures are adhered to.

The official statistics, obtained by Sputnik, show that during the lockdown Delhi Police issued 97,374 spot fines and the District Magistrates (DMs) 93,723, and the municipal corporation prosecuted 6,480 people.

Speaking to Sputnik, Ms Isha Khosla, District Magistrate of North Delhi, said that the main reason the majority of fines had not been recovered is because most people, when apprehended breaking coronavirus restrictions didn't have enough cash on them.

Khosla revealed that the imposition of fines is not designed to extract money but to spread awareness and ensure strict enforcement of lockdown rules. “Issuing a spot fine acts as a deterrent to a great extent, even if the money is not paid by the violator.

“We have observed that, ever since the fine for not wearing a mask was imposed, there has been a dip in the number of violators," the North Delhi district magistrate added.

Ankita Chakravarty, the District Magistrate of South Delhi, said that there are two ways for any violator to pay the penalty amount - by paying on the spot in cash or paying in court.

“Many violators ask us if e-wallets such as Google Pay, UPI, Paytm etc. are accepted. But, there is still no provision for online payment of fines issued for violating COVID-19 restrictions. So, we have no option but to issue a spot fine under Section 188 of the Indian Penal Code (IPC) which then goes to the police,” she said.

Meanwhile, a senior Delhi Police official, speaking on condition of anonymity, also admitted facing problems as thousands of people have not paid their COVID-19 fines.

"Such cases are then forwarded to the city court, which then conducts hearings and disposes of the cases. But, there is a huge backlog of cases in the courts regarding fines because of the sheer volume of the prosecutions,” the police official explained.

Over the past one week, the national capital has reported a decline in new daily COVID-19 cases.  According to Delhi’s health bulletin, the city witnessed 576 daily new COVID-19 cases on Wednesday and 103 deaths from the virus.